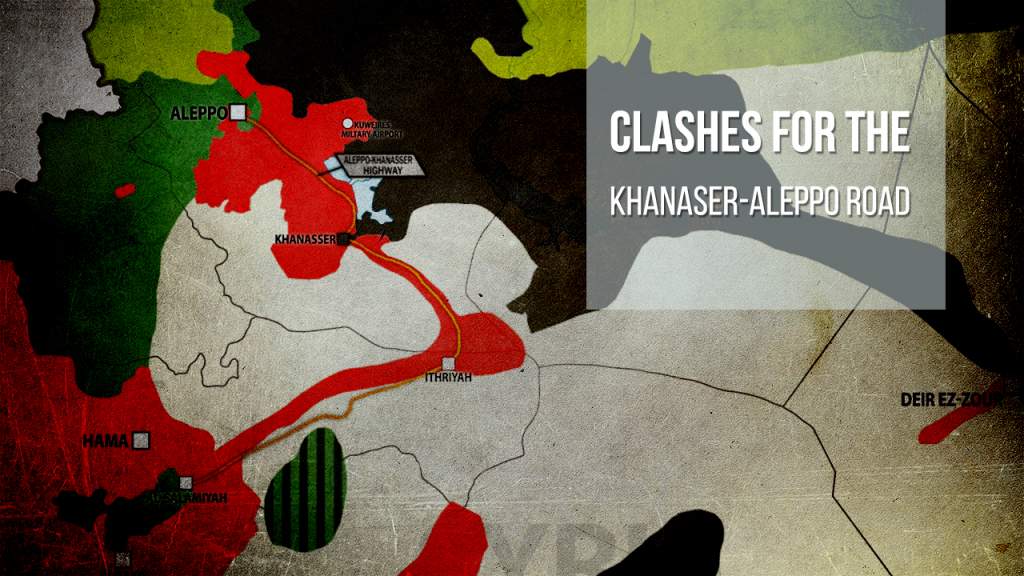 The Syrian Arab Army (SAA) and its allies supported by Russian warplanes have pushed ISIS and al Nusra militants from their recently captured positions around Khanaser, Rasm Al-Nafal and Shillalah Al-Kabeera along the Khanaser-Aleppo road. According to reports, the Russian Air Force conducted more than 60 airstrikes on the ISIS and al-Nusra positions allowing the SAA strengthened by Hezbollah and Harakat Al-Nujaba units to secure this sole and thin artery connecting Aleppo with “mainland Syria.” The loyalist forces also took control of the village of Zabad east of the road.

In turn, ISIS launched an offensive and captured the strategic town of Khanassser. Without it, the SAA has no way to open the supply route to Aleppo. Heavy clashes are ongoing.

Miltiary sources report that the SAA is preparing for large-scale operations to regain control of strategic strongholds and areas in Idlib countryside. The scheduled military operations will start from Southern Aleppo in direction of Northern Hama to pave the way for seizing back Jisr al-Shughour.

Following heavy clashes with the SDF, ISIS re-captured a major part of the town of Al-Shadadi in the Hasaka province on Feb.22. The clashes are ongoing there.

Meanwhile, the Turkish artillery shelled the Kurdish strongholds in the town of Tal Rifat and the Minaq airbase in the Northern part of Aleppo to prevent their advances against terrorists.

The Syrian Democratic Forces (SDF) that is comprised of mainly Kurdish fighters as well as a few Syrian Arab units have received the US training and have been provided with some air support of the US-led coalition in the Raqqa province in Northeastern Syria. However, in Northern and Northwestern Syria, they have been operating mainly as the Kurdish “People’s Protection Units” (YPG) and receiving the Russian air support at least since the conquest of Tishrin Dam on the Euphrates early in February.