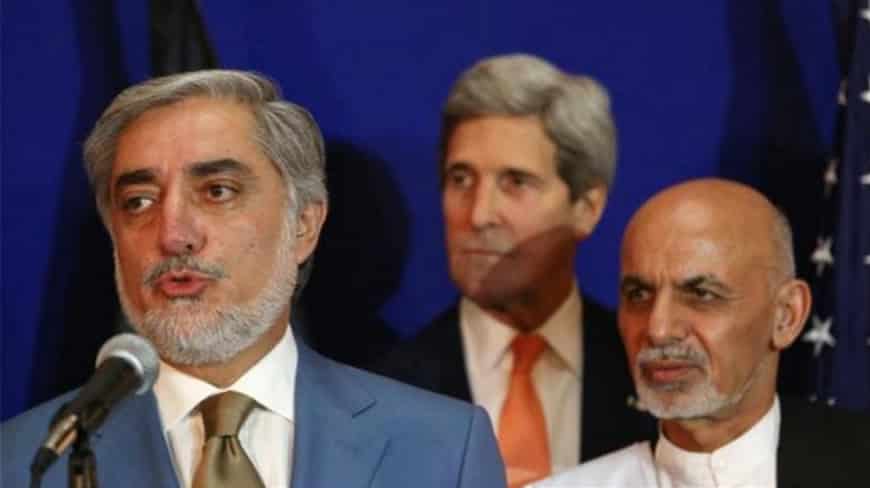 It is almost a month that the rumors about the collapse and fall of the Unity Government is being heard through domestic and international media, and also the politicians, secret services agents and even senior government authorities talk about it.

They made Ulema, Mullahs, tribal elders and players to encourage the security forces to do fight; in the case, they have appointed the leaders that their fellow soldiers doubt about their competence and criticize their discriminative treatment.

Presence of shadow soldiers; for example, the official statistics show that there are 38000 soldiers in Helmand; however, there is only 18000 soldiers physically present there.

3- Collapse and self-protection mentality among the senior government officials even inside military; they often make remarks about the collapse of the government, they always think of protecting themselves and their position in case the governmental system changes.

4- Lack of coordination and responsibility; even high-level and mid-level officials of the Unity Government act independently, those who are hired by Ghani do not obey the orders of Abdullah and those who appointed by Abdullah do not obey the orders of Ghani and Dostum. They do not take responsibility due of that they are hired in accordance to personal and political affiliation.

5- A lot of senior officials in civil and military organs just think of receiving privileges, they do not perform their duties, they do not consider to or cannot run and improve the system; we witnessed that neither the reasons behind fall of Kunduz revealed nor the responsible elements behind the fall of Kunduz identified and no one punished, either. Only some junior security intelligence officials became dismissed and left aside that perhaps it would create another headache for the government in the future.

7- NUG does not have air force and the international community does not believe in its mechanism; they mind that they would, to a large extent, bombard in accordance to incorrect intelligence as well as they have several times provided NATO with incorrect intelligence and innocent civilians became bombarded, then. In some cases, NATO bombarded some civilian targets intentionally, for example, they bombarded the MSF’s hospital in Kunduz. NATO concerns that if it provides the government with air force, perhaps, targets of various sides inside the government would be aimed by them or perhaps, regional or tribal discriminations would be taken care, for example, in regards to artillery, the incidents in Sangin, Wardak and Dand-e Ghanori may be considered.

8- The sources of UN Assistance Mission in Afghanistan (UNAMA) said that the NUG will not be provided with budget for the upcoming Parliamentary and District Councils election; when the Parliamentary elections are not held and the 2-year agreement between President Ghani and CEO Abdullah, which states that the upcoming Parliamentary elections would be held and the Presidential System should be changed into Parliamentary System within two years after the agreement and the position of Prime Minister would be officially recognized by the Parliament after that, is not implemented, the agreement would be automatically dismissed, and if it is extended or the both parties become satisfied, Abdullah still seems discontent for his authority is limited.

9- When there is not budget for Parliamentary elections, the government, then, becomes weaker day by day, loses control over some areas, and then it would be brought pressure on Ghani and Abdullah to resign. I think the International Community plans to collapse this system, and if it is done, there would be no legal Parliament and no legal Senate, then. The control of the government would be handed over to the head of National Security Council, Haneef Atmar, which it would cause several other problems to be created in the future.

10- According to NATO’s report to Spiegel, out of the total 101 infantry units only one has been characterized as effectively battle-ready; in this case, it would be so hard for present Unity Government or any other government replaces NUG to have advancement in the fight against the Taliban, instead of that, they would lose other areas, also.

According to a secret report by NATO, more than 20 security personnel are being killed on daily bases and the causalities of Afghan security forces are increased in compare to 2014 and 2015.

In addition to that, the heavy military causalities and lack of soldiers’ interest in war and advancement of the Taliban are also reported.

12- Public confidence in the NUG is too low; according to a survey by the Asia Foundation, which is an American administration and back the government, the proportion who say the national government is doing a good job has fallen to 57.8% in 2015, down from 75.3% in 2014. If a real survey is conducted, the portion of the public confidence in the NUG would not increase than 30%.

13- President Ghani said that if the assistance and presence of foreign forces did not increase in Afghanistan, it would be hard for the NUG to survive by the end of 2016. Also, U.S National Intelligence Director, James R. Clapper warned that Afghanistan is faced with the risk of a political breakdown in this year.

14- Remarks of generals and leaders of Afghan National Army (ANA) that do not trust in the government; a soldier which is under siege in Baghlan disrespects his leaders. A fugitive police in Germany said that he took four ballets and became injured in a fighting with the Taliban, but he was not given medicine for two days in 200-beds hospitals, as the doctors told him that his file is yet to be completed. He asks President Ghani and Abdullah that why he recall them to Afghanistan, whether they want them to be killed by the Taliban, and their own sons and daughters to be safe in foreign countries.

15- Foreign researchers and policymakers participated in International Conferences, including those convened secret, on Afghanistan held in Western countries think that the NUG cannot abide and it is hard for it survive, and they say that it is not appropriate for it to last, peace is the only solution.

16- A pregnant wife of a policeman was forced to give birth to her baby in the open courtyard of the Sardar Mohammad Daud Khan Army hospital in Kabul after being refused treatment by hospital staff which is affiliated to Afghan security forces. Such events have negative impact on the ranks of the army; unlikely, they increase the morale of the armed opposition.

17- Kabul electricity was good at Dr. Najeebullah’s era, but it has problems now. Kandahar does not have electricity since many years. People harshly criticize the competence of the government and the country is faced slump and depreciation of Afghani (currency).

18- Resignation of Rahmatullah Nabil, General Director of the National Directorate of Security (NDS), who had become familiar with regional intelligence games; however, he was criticizing the NUG’s policy regarding Pakistan that caused him to resign. Meanwhile, Deputy Director of NDS, Adeeb Fahim also resigned, and rumors about the resignation of Ulomi, the Interior Minister are heard, too. It is said that Ulomi had presented his resignation to the President, but as the NUG is passing through a crucial situation, and succession was a problem there because if both the minister of Defense and Interior were acting-minister, so the criticism on the government would increase further; that’s why Ghani did not accept his resignation yet.

19- Fleeing of youth to Europe and other countries; 280000 youth have fled to European countries in past two or three years and only in 2015, 160000 youth had to flee their country. 50000 governmental positions are remained empty due to corruption and defalcation and no one is yet to be hired.

20- Increase in poppy cultivation and drug trafficking; meanwhile, the number of people addicted with drugs reached to 3 million and counting.

22- Disputes over power between NSC and Rahimi, head of Presidential Office, former Communists and former Mujahedeen, Ghani’s campaigners and his present team, Abdullah and other leaders of the North Coalition cause the government to collapse sooner than expected.

23- Unrealistic promises regarding the peace, and as experienced, fruitless and failed attempts and futile quadrilateral meetings.

24- Lack of balance in relations between neighboring countries and especially breaking the lines of diplomacy and neighborhood with Pakistan; seizing some parts of Durand Line by Pakistan security forces, and suspended security agreement with Pakistan.

25- Change in Pakistan’s policy and different positions of civil and military government; problems between Saudi Arabia and America, as America become closer to Iran, increase day by day, so Saudi Arabia has to establish close ties with the Taliban. Considering Pak-Saudi ties, it seems that a change is being brought in Pakistan’s position regarding the Taliban, so Pakistan would not fulfill the promises it had made to the NUG, for it did not have influence and control over the Taliban, and also it would not want to put pressure on the Taliban nowadays, then.

Taliban and U.S are the main Parties

Perhaps, the NUG would become weaker or perish until October, some sources tell that the term of NUG will be completed by October in accordance to the plan of International Community, therefore, Ghani and Abdullah are supposed to struggle for truthful peace.

U.S is a part of the Afghan issue; it should take responsibility, and should end the Afghan war responsibly. As it is time for the political transformation in U.S, the Presidential elections will be held there soon. Doing this job is hard for the present administration; hence, the new government which will take power in 2017 will made the decisive decision regarding Afghanistan.

The message of the Taliban is quite clear that they do not accept foreign presence, but America takes herself out of the play and it will happen and one day America will take necessary measures to solve this problem face to face. America could not be expected to become in the middle of the play, Taliban and America would reveal their policies by 2017. America would eventually become in the first line of the political or military ground, Afghan government cannot solve this issue.

At the end, war cannot solve the problem, U.S should prefer peace policy instead of war and it is supposed to make its peace-related assistance to the Afghan government and Pakistan conditioned and limited.