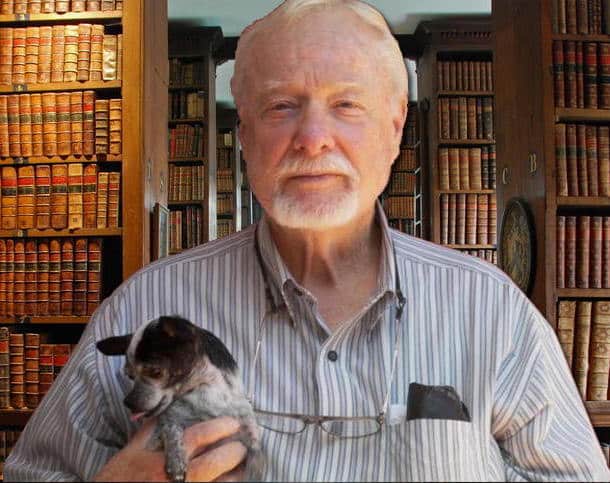 Word has come that Founder of C.O.D.O.H., Bradley Smith, whom we all know, has died after a very long struggle with cancer. I have been asked to write a few words as part of a Memorial Collection.

Here is my tribute to my friend:

I remember Bradley winging his way from California to Toronto to put in an appearance as a defense witness at my 1985 Great Holocaust Trial. He arrived after many delays during one of the worst blizzards of the season via a small plane from Buffalo to New York and then on to Toronto – with only $5 – in his pocket, unable to pay for a cab.

We needed Bradley. Bradley was stranded, snowed in at the airport. The trial was in full swing. I immediately dispatched one of my bodyguards to pick him up in his pick-up truck at the airport, while the Zundel-Team, led by Doug Christie, was in court battling it out with a very poisonous Zionist Lobby with all the money in the world.

Bradley arrived, looking like Santa Claus, snowflakes-covered white hair and beard, red nose and all. His testimony was to begin the next day.

The prosecutor led the attack, aided by a judge who made no bones about where his politically correct loyalties were parked. The grilling of our defense witnesses was nasty, intense, virulent, highly insulting. But Bradley was Bradley – he was not to be dislodged from what he had come to contribute to Canadian Freedom-of-Speech-under-Siege. He dug in his heels and stayed put. He simply laughed off the darts hurled at him.

Then came the highlight for which he will be remembered forevermore in the Annals of Revisionism Pure.

The prosecutor, just like the fool he was, read him the “famous” Elie Wiesel passage of “… the ground heaving and geysers of blood shooting up into the air …” – from corpses presumed to have been buried in a mass grave weeks if not months ago! This in a 1985 courtroom in Toronto!

At that point, Bradley asked in his deep, manly voice: “Your Honour, am I expected to believe this?” In the audience, there was an audible gasp. And then our Bradley looked the judge straight in the eyes and said calmly: “Your Honour, I don’t believe that guy is wrapped too tight…”

It was like a catharsis in that courtroom. Loud laughter! Applause! Howling! Mayhem! It took the judge ten minutes to calm the spectators down. That multi-million dollar prosecution team never recovered from the “one-two” knockout punch by Bradley Smith with his last five-dollar bill in his pocket!

What else? The next day, Bradley was totally immobilized with severe back pains. His moans were pitiful! In order to take his mind off his pain, I put a portable cassette recorder on his night table and gave him a stack of my radio interviews to listen to … and once again, revisionist history was on the march.

As soon as he returned to California, Bradley started his own Talk Radio Call-in program. It lasted many years and was immensely popular. He had an ideal radio voice. He literally became the bane of the Holocaust Lobby – acknowledged thusly to the very day he died. Just ask Abe Foxman what he and the ADL think of Bradley!

Bradley knew how to mine even his failures. He advertised them faithfully. It is no secret that Bradley was always operating at the edge financially, always driving old wrecks which frequently left him stranded on California’s busy highways.

Many a project which he started with great fanfare never made it to completion. Not that defeats deterred him in the least. He was forever confident that his next project was going to bring the decisive Revisionist Breakthrough and leave the Chosenites writhing in the dust.

One could justifiably say that “… never has one Revisionist warrior gone so far with so little – with his smallish mailing list, with virtually no money, no organization, no light at the end of the tunnel. For decades! Ingrid tells me he was also a superb wordsmith who, in his understated style, knew exactly how to probe for the nerve. He became the terror of every President of major US universities with his carefully crafted, tongue-in-cheek Revisionist arguments that shamed them out of their socks for licking the boots of the Lobby !

Ingrid has a bundle of endearing memories as well. This morning, as she was telling me that Bradley had passed on, she told me this story against Bradley’s express wishes.

Shortly after my arrest and deportation, she and Bradley sat together on a California bench outside a restaurant, trying to think of ways and means to get me back to the US. Suddenly Bradley started to cry – quietly, softly, as strong men might who are loath to show their emotions.

Ingrid swallowed a couple of tears of her own. Then Bradley pulled himself together, blew his tears out of his nose with a trumpeting sound, and said to Ingrid: “Don’t you ever tell Ernst that I bawled…”

I liked Bradley Smith. He was unique. I don’t know anyone who didn’t like him. I will miss him. We had lots of laughs together. He will leave a void in the Revisionist community worldwide. I am proud to have known him, and to have worked with him. My condolences go to his hard-working Mexican wife of many years, who affectionately called him El Gordo.