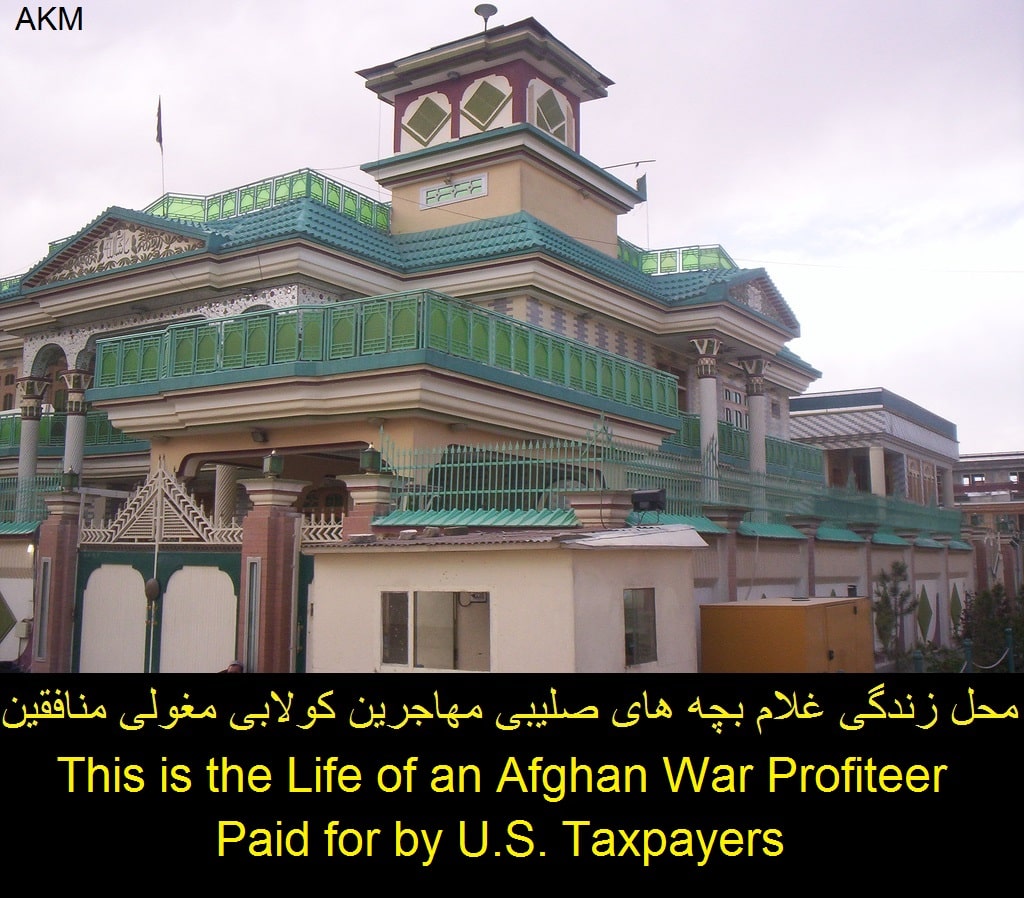 The U.S. Government’s has a failed foreign policy in Afghanistan. The perpetuation of this ugly war by the Pentagon and CIA has resulted in systemic and rampant corruption and tremendous suffering and loss of life, which has only benefited the war profiteers. The U.S. war in Afghanistan is the longest one in U.S. history. As history has shown, Afghanistan is the graveyard of superpowers. Now the United States is stuck in the graveyard of superpowers. This war can never be won. Only the war profiteers win. Congress needs to find a way to honorably remove the United States from this war. The Department of State’s four-way talks will not end this war.

The four-way talks regarding Afghanistan, which were started in January 2016, are just a way to coverup the corruption, where several trillion dollars of donor monies went to fund reconstruction in Afghanistan, and to continue the war. A good portion of these monies were misused, stolen and ended up in the personal bank accounts of the war profiteers. The participants of these four way talks are war profiteers, who want to keep the war going. They do not want peace in Afghanistan. Along with the war mongers in the Pentagon, these participants want the war in Afghanistan to continue so that they can continue to profit. The U.S. Government has SIGAR to investigate the corruption. However, the report by SIGAR is very interesting but it is just the tip of the iceberg. Really SIGAR’s effectiveness and impact on the corruption are very minuscule.

Everyone knows about the Kabul Bank corruption, but the Afghanistan Ring Road project is an example of extensive corruption where war profiteers have absconded with the monies while not finishing the project. For example, the ECCI and METAG joint venture for a total of $477 million dollars, was contracted to complete the ring road from Qaisar to Laman in Northern Afghanistan. Yet this joint venture did not finish the job but these war profiteers received the money. Congress should ask the Department of State about the corruption tied to the Afghan Ring Road.

In addition, it has been brought to my attention, that once again the communist war criminal, Rashid Dostum, the First Vice President of Afghanistan, is being sent to the Northern part of Afghanistan to kill the Afghan/Pashtun, the first people/native Afghans, who are the majority ethnic group in Afghanistan. As he has done in the past, Dostum is committing ethnic cleansing and genocide of the Afghan/Pashtun. Rashid Dostum is a documented war criminal. He was the subject of articles in the Time magazine and Newsweek. As reported in the Time on November 19, 2001, and in Newsweek, on November 5, 2001,Dostum and his group raped many Afghan women and children, “Dostum’s marauders chopped off breasts and tied the toes of women behind their heads.” Instead of prosecuting this criminal, my U.S. government ignores his war crimes, supports and keeps him on the payroll. The United States government needs to follow the rule of law and international law. Instead it is covering up these war crimes and helping him commit new war crimes against the Afghan/Pashtun like recently in Faryab Province. In addition, the Afghan majority has not forgotten about the war crimes committed by Dostum against the Pashtun in November 2001 at Dasht-e-Leili even though the United Nations and the United States has. When the UN asked the Afghans to surrender the Afghans did, and Dostum cowardly massacred them while he was partnering with the United States.

The United States through its installed- Afghan government is using the communist war criminal Dostum to do its dirty work, since the only threat and resistance to the war profiteers and the U.S. control of the Afghans’ Rare Earth Elements (REEs) and other natural resources comes from the Pashtun. Likewise, the U.S. installed Afghan government is appointing Hanif Atmar, a communist war criminal, as the National security adviser. Their war crimes are documented. Yet instead of being prosecuted in lawful tribunals, U.S tax dollars are used to fund these thugs. The United States is using these thugs to attack Afghans/Pashtun. Shame on my U.S. government.

For the United States to honorably end this ugly war the first step is to prosecute communist war criminals, who are present or former members of the Afghan governments during the past 16 years such as:

Afghans have suffered enough these past four decades because of war, occupation and corruption. The Afghan children have suffered enough. Stop killing and terrorizing Afghans. Change the war strategy to a “sincere” negotiations strategy for peace. Pakistan cannot be involved in these negotiations because it is a known condition that the Afghan Freedom Fighters will not accept; the United States knows that the Afghan Freedom Fighters will not come to the table if Pakistan is involved. Therefore, I strongly believe that peace negotiations must be held without Pakistan’s involvement.

I hate war. I know the suffering that war causes. It is time to end the cycle of war and suffering. It is time for sincere peace talks. It is not the time for a framework established by the four-party committee through talks that will place the usual hurdles and unattainable preconditions to peace talks. The U.S. needs to change its war strategy to a peace strategy. The U.S needs to talk directly with the Afghan Freedom Fighters.

U.S. Congress needs to cut the funds for Afghanistan and end this war, which is filling the pockets of war profiteers and emptying the American coffers.