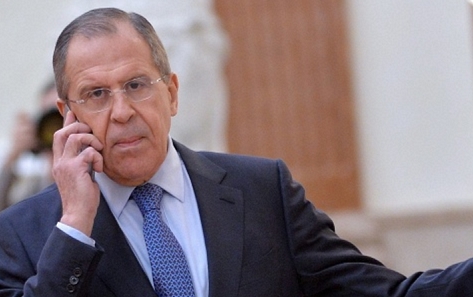 “The only matter agreed in Vienna that has no positive changes is political talks,” Lavrov said after a ministerial session of the Russian-Arab Cooperation Forum.

“This comes as certain groups of the regime opponents and their Western sponsors try to bargain for privileged position, to strengthen positions that will create advantages for them over other groups,” he said.

Now real progress has been reached in the humanitarian area and conditions have been agreed for cessation of hostilities. “This group of saboteurs of political talks has no other pretexts left to continue setting preconditions to launch the intra-Syrian dialogue,” Lavrov said. “Let’s hope that those who have decisive influence on them will make certain conclusions and remove obstacles on the way towards comprehensive full-fledged implementation of agreements confirmed by UN Security Council resolution 2254,” he said.

“Here it was clearly defined that all the efforts should be parallel and there should not be and may not be any preconditions for political talks,” Lavrov said.

According to the minister, the Russian-US initiative on a ceasefire in Syria does not envisage any reservations.

Already before the proposed ceasefire comes into effect, a number of participants in the conflict have announced their joining the truce regime, the foreign minister said.

“The Syrian government has already done it,” he said. “I am confident that those who are fighting in Syria at the invitation the legitimate authorities of the Syrian Arab Republic will do the same,” he added.

“The Democratic Union Party and other groups of Syrian Kurds have already done this,” the minister continued. “This has already been done by many groups from numerous units of Syrian opposition in the east of the country, including Sunni groups that have contacted Russian military,” he added.

“Participants in meetings of the Syrian opposition that have been held in the past year in Cairo and in Moscow have come out in favor of a ceasefire,” Lavrov continued.

“I have heard that the so-called High Negotiations Committee that was formed at meetings of (Syrian) opposition in Riyadh, also said it agreed with the ceasefire, but unlike all others it did it with a reservation – only for two weeks,” Lavrov said, noting that “Russian-American initiative does not envisage any preconditions and reservations”.

The UN Security Council is due to adopt a resolution on Friday in support of the Russian-US statement on ceasefire in Syria, Sergey Lavrov went on to say.

In line with the decisions of the Munich meeting, Russia and the United States worked out a document on conditions of cessation of hostilities that was positively assessed by the international community, Lavrov reminded.

“Today the document will be approved by the UN Security Council and at the meeting of the Syria Support Group in Geneva,” Lavrov said. Russia FM: There is no “plan B” on Syria and there never will be

Lavrov stressed that no one can give any absolute guarantees for implementation of the deal on Syria ceasefire.

“The agreement has been reached, it will be approved by the UN Security Council today, but this does not mean that it will be implemented by itself,” Lavrov said. “Literally, everyday efforts are needed to accompany this agreement and its implementation in practical steps on the ground.”

The success of the deal hammered out by Russia and the US on Monday depends on a whole range of factors, Lavrov said. “First, this is ability of all foreign actors to place interests of the Syrian people and interests of stability in the region above their own neo-imperial and other geopolitical ambitions.”

This means that all the foreign actors should exert pressure on those forces in Syria who rely on support of this or other side. “This pressure should be in one direction – everyone must comply with the ceasefire conditions as they will be approved by the UN Security Council.”

The success will also depend on “ability of international community to fulfill the decisions that have been already taken” including the UN Security Council resolutions on curbing flows of terrorists to Syria from abroad and illegal trade of oil and other goods.

“This envisages establishment of strict control on the external borders of Syria,” the minister said. “There is a respective mechanism as part of the UNSC. It is important that this mechanism should report fairly and unbiasedly and not try to hide facts from the UNSC as this happens sometimes.”

The success of the Russian-US initiative on ceasefire in Syria will also depend on the ability of co-chairs of International Syria Support Group (ISSG) to fulfill their commitments clearly and without any ambiguity, Lavrov said.

“There should be no speculations, in particular, that Jebhat al-Nusra maybe does not deserve to be excluded from ceasefire regime,” Lavrov said. “Of course, there should be no ambiguous talks in the framework of the US-led coalition on some kind of Plan B, on preparations for a ground operation, on establishing some kind of buffer and no-fly zones which were long ago recognized as absolutely unacceptable,” he added.