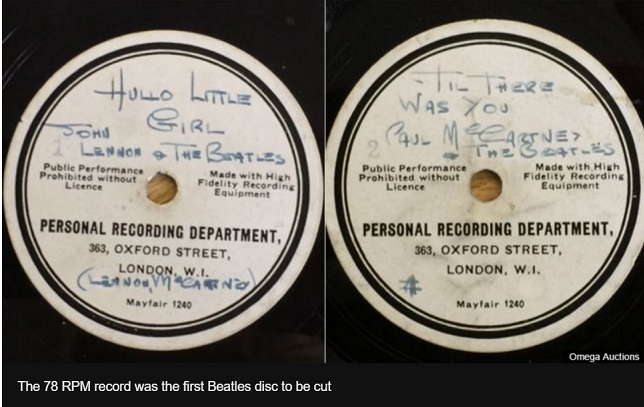 A rare Beatles recording, rocked by the band during the 1960s, was found in the attic of the keyboard player of Gerry and the Pacemakers. It is set to go up for auction and could end up being bought by a rich collector in Russia, Sputnik has been told.

The 1962 10-inch record of ‘Till There Was You’ and ‘Hello Little Girl’ was discovered by Les Maguire, the keyboard player in fellow Liverpool act Gerry and the Pacemakers, in his attic. It was made at the iconic HMV Oxford Street, London, store and given to the future Beatles producer George Martin by EMI in order to secure a deal.

“I think it’s the actual artifact that’s important. It’s the fact that the Beatles did some demos on a tape and Brian Epstein — when he was down in London trying to sell the band — decided to get a couple of tracks cut onto an acetate.

“In those days, record companies would have tape recorders as well, but it was just as easy to put a record on. So he cut a one-off, unique acetate. Two sides. He wrote the track names on it in his own handwriting and gave it to George Martin who ended up being the Beatles’ producer, who signed them to Parlophone [record label].

“It’s one of the records that led to the Beatles getting the audition and becoming the Beatles as we known them,” Shirley told Sputnik.

He said there would be considerable interest in the item, which is due to go under the hammer at Omega Auctions in Warrington, UK on March 22.

“And there will be other people who are very wealthy and who may bid on it just for the sake of it. It’s that kind of trophy bit,” he said.

The Beatles were at the height of their success during the 1960s thought to the 1980s and through the Cold War. However, the Beatles had a strong fanbase in Russia, despite not being allowed to play there officially. In 1958, they released ‘Back in the USSR’ which became an instant hit, but provoked political controversy with the band being accused of being pro-Soviet.

Shirley told Sputnik he would not be surprised if the rare record was picked up by a rich Russian Beatles fan.

“I wouldn’t be surprised if one of them did. It is something that could end up ‘Back in the USSR’. Somebody who’s very wealthy will buy it. It’s a great thing to buy. It will hold its value. That’s for sure,” Shirley told Sputnik.