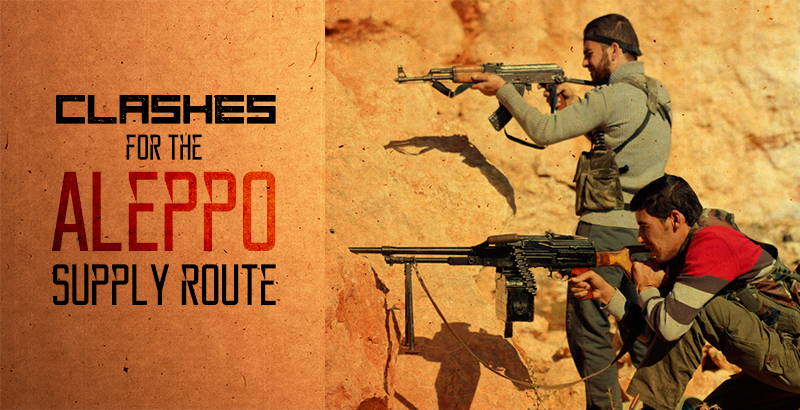 The Syrian Arab Army and its allies are struggling to reopen the only Aleppo supply route cut by ISIS and Al Nusra this week. Following the liberation of Khanasser and Maghārat, the loyalist forces continued to advance north capturing the Talat Al-Bayda hill top and setting the ground to seize the village of Al-Hawaz. In a separate advance, the Tiger Forces with significant artillery and air support has liberated the village of Shilallah Al-Kabeera reaching the outskirts of Shilallah Al-Saghira. The offensive on Al-Hawaz and Shilallah Al-Saghira have been launched today morning.

According to reports, Jeish al-Fatah militants backed up by Turkish artillery fire, gained control over the villages of al-Dorra and al-Saraf in the Northwestern parts of al-Rabia’a town in the province of Lattakia. After taking control of these two villages, the militants receive reinforcements and a large cargo of weapons and military equipment poured through via the Turkish borders.

It was reported on Feb.25 a commander of Jeish al-Izza militant group, Musa Abdallah, was killed in a Syiran airstrike in Hama.

Some 30 Saudi Air Force officers with a cargo of military equipment have arrived to the Incirlik military airbase in Turkey to prepare for a joint air campaign in Syria. The deployment of Saudi fighter jets is expected in next 24 hours.

More than 50 Russian officers with peacekeeping experience have arrived to the ceasefire center in Latakia. Thanks to their intermediation, several armistice agreements have already been signed with a number of formations in northern Latakia province. The officers also started to send humanitarian aid to the areas freed from the terrorists.