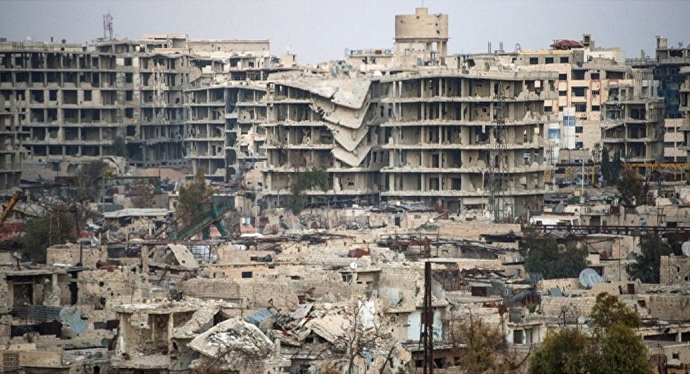 [ Editor’s note:  The Saudi led and financed Jaysh al Islam group, the largest operating inside Syria other than ISIS and overtly under the control of the Saudi Royal family, is using the cease fire to hide among other groups and wreak havoc on Syria’s population.  The Turkish backed al Nusra (al Qaeda) group is following the same path, trying to turn Damascus into what they have done to Baghdad, a graveyard.

This same Saudi led group is the same one Saudi Arabia fought to have included as part of the “moderate head choppers” over strong Russian objection.  Now they are openly not only boycotting the cease fire but involved in full scale terrorism as well… Gordon Duff ]

Despite a tentative ceasefire and truce negotiations being discussed by groups across Syria, terrorist groups not party to the ceasefire continued their attacks on Saturday, primarily aimed at civilians.

Although the Russian-US negotiated ceasefire largely held on its first day, a series of blasts occurred across Syria by terrorist groups not party to the negotiations.

“Terrorists in the Jobar and Duma neighborhoods fired mortars at Damascus residential areas. There have been no reports of dead or wounded among the civilian population,” a military source told RIA Novosti.

A military source speaking to Syrian television also urged area residents to pressure the terrorist groups responsible to prevent them from ending the ceasefire.

The Daesh terrorist group not subject to the ceasefire also continued assaults in the Hama province and the eastern Syrian city of Deir ez-Zor. In the city of Deir ez-Zor, mortar shelling of two neighborhoods by Daesh killed three children, with another 12 persons injured.

In the Hama province, Daesh suicide bombings killed a total of six people, including two soldiers killed by a car bomb at a military checkpoint. Another suicide bombing carried out on a motorbike killed four people, and a suicide attack on a highway injured one person.

In northern Syria, Daesh attacked a town held by the majority-Kurdish Syrian Democratic Forces. The attack, near the Turkish border, was repelled by the Kurdish self-defense forces (YPG) with the aid of US-led coalition attacks on Daesh positions.