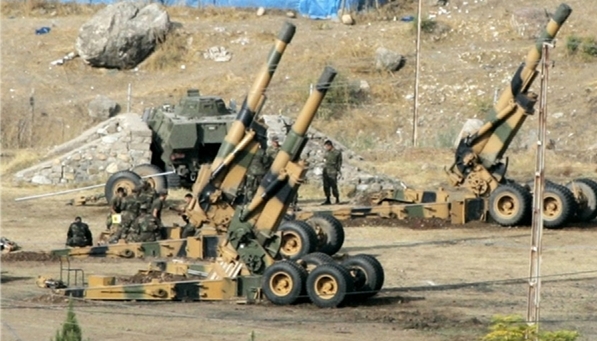 TEHRAN (FNA)- The Russian Defense Ministry confirmed on Sunday that a newly-liberated town in the Northern part of Raqqa near the border with Turkey has been heavily shelled by the Turkish army’s artillery units.

“Russia has received information of an assault on the Northern Syrian town of Tal Abyadh from Turkish territory,” the head of the ceasefire monitoring center at the Russian Hmeymim airbase in Lattakia said Sunday.

“The Russian center for the reconciliation of the warring parties in Syria received late on February 27 information about the attack from Turkey on the Syrian city of Tal Abyadh,” Lt. Gen. Sergei Kuralenko told reporters.

Russia’s ceasefire monitoring center has asked its US counterpart in Amman, Jordan, to explain the shelling.

TEHRAN (FNA)- Russian sources announced that tens of terrorists have crossed the border from Turkey to Syria where they are fighting with the Kurdish forces in Raqqa province.

More than 100 militants have arrived in Raqqa province after crossing the Turkish border, the Russian-language media outlets reported, adding that the fresh terrorist troops have been sent to take the town of Tal Abyadh back from militants.

The news comes as the ISIL has confirmed that it has pulled its fighters back from key Tal Abyadh town in the Northern part of Raqqa province at the border with Turkey under the heavy attacks of the Kurdish People’s Protection Units (YPG) alongside the Syrian Democratic Forces (SDF).

The YPG and SDF fighters are now engaged in fortifying their positions inside and outside the town.

The Kurdish fighters have significantly advanced against the ISIL militants in the town of Tal Abyadh and have pushed the terrorists back form the town.

Reports said on Saturday that the YPG alongside the SDF have engaged in heavy fighting with the ISIL terrorists in the Northern part of Raqqa province.

The Kurdish forces stormed the ISIL positions near the town of Tal Abyadh and inflicted major losses on the terrorists.

The SDF that is comprised of mainly Kurdish fighters as well as a few hundred Syrian Arab dissident forces have received trainings from the US and have been provided with scanty US-coalition air support in their battles in Raqqa province in Northeastern Syria; but in Northern and Northwestern battlefronts, they have been operating alongside the YPG and received the Russian air backup in their Aleppo wars that started with the conquest of Tishrin Dam on the Euphrates early in February.

Assisted by the Syrian army – that has along with popular forces and Hezbollah conquered almost all militant-held regions in Eastern, Southern, Western and Northwestern Aleppo province – and Russian air support, the Kurdish forces fighting against the terrorists in North-Northeast Aleppo province have been making striking advances against the al-Nusra, Ahrar al-Sham and ISIL terrorists in February.

Earlier this month, the YPG and SDF fighters prevailed over the terrorists in the highly strategic city of Tal Rifat in Northern Aleppo and captured the city.

The YPG, who enjoyed the Russian air backup, prevailed the terrorists’ positions from the Western direction and shook hand with the Kurdish units of the SDF who entered the town from the North.

Lebanese Writer: Turkey Playing with Fire in Mosul, Not to Benefit from Iraq’s Disintegration

TEHRAN (FNA)- A prominent Lebanese writer underlined that disintegration of Iraq will not benefit Turkey at all, adding that Ankara’ military intervention in Mosul means playing with fire.

“Turkey thinks that the plan for the formation of an independent Kurd country will fail by the expansion of its influence in Iraq,” Mohammad Morteza told FNA on Sunday.

Stressing that disintegration of Iraq will not benefit Ankara, he said, “Turkey is playing with fire through its military deployment in Mosul.”

Morteza warned that the Iraqi Kurdistan region which is now cooperating with Turkey to implement plans to separate from Iraq will not lose the opportunity for uniting with the Syrian Kurds (which are considered as a threat to Turkey’s territorial integrity), specially given the fact that the Syrian territories resided by Kurds are oil rich regions.

The Turkish troops are still in Northern Iraq near the city of Mosul which is under the control of the ISIL, despite repeated protests by Iraqi officials.

On December 8, the Arab League condemned the deployment of Turkish troops in Northern Iraq, labeling the incident an “intervention.”

Turkey is also launching airstrikes against the Kurdish fighter posts in Syria.