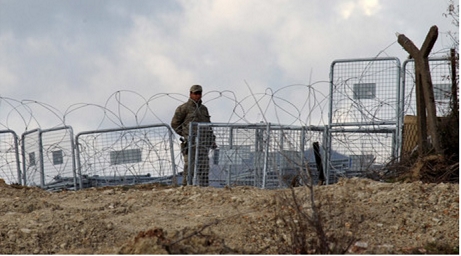 A Russian TV crew has managed to obtain video proof of Turkey’s increased military presence on the Syrian border, as it filmed fortifications and tanks on the frontier.

The lodgments are heavily fortified by tanks and self-propelled guns, REN-TV crew reported from the scene.

Shells and other ammunition are being delivered to the Turkish positions, which are shelling Kurdish forces in Syrian territory, according to the report.

“The barrels of the tanks and self-propelled guns are pointed in the direction of the mainly Kurdish Syrian city of Kobane,” the journalist said.

There were at least six or seven tanks in the area and the Turkish forces on the border can be deployed in Syria “in an instant,” according to REN-TV.

Meanwhile, the area appeared to be very active, as Turkey continued to transport various supplies to the border.

The REN-TV journalists spoke to the mostly Kurdish locals, who openly accused Turkey of being “friends” with the Islamic State fighters that had earlier raided nearby houses. The extremist fighters took the most expensive things from the homes, including “money and jewelry,” they said.

The residents also provided evidence proving that various military crimes had taken place and described how Turkey and Islamic State forces had opened fire on locals trying to flee the area – and then stolen their cars.

“There were 30 cars moving towards the border when Turkish military and Daesh fighters opened fire on the vehicles, a lot of them caught fire. Terrorists ended up taking the vehicles that could still drive,” resident Beker Ramadon told REN-TV.

Moreover, in the city of Jarabulus, which is located in the north of Syria near the Turkish border, residents told the journalists that local houses are being destroyed by Turkish tanks.

“Turkish tanks fired at and destroyed a house five days ago,” a Kurdish fighter said, pointing to the rubble.

The REN-TV reporters tried to determine where the fire had come from and noticed a couple of hidden tanks in the pictures they had taken from the crime scene.

During the first night of the Syrian ceasefire, more than 200 Islamic State fighters crossed the Turkish border into Syria and another 100 came up from the Syrian city of Raqqa before joining forces near Kurdistan, the Russian center for reconciliation said in a report.

The journalists said the fighting had intensified quickly after that, adding that if not for the brave efforts of the Kurdish forces in Syria, the city could have been easily overrun by the terrorists.

There have also been reports of a heavy artillery attack on the Kurdish town of Tel Abyad in northern Syria near Kurdistan. However, Turkish military sources denied to Hurriyet that its forces had been involved in any cross-border shelling.

The much-anticipated Syrian ceasefire was brokered by leading world powers, including the US and Russia. It aims to pave the way to reconciliation between the Syrian government and “moderate” rebel forces, which would together agree on a peaceful political transition for the country.

The terrorist groups in Syria, such as Islamic State and Nusra Front, are excluded from the ceasefire, which took effect at midnight on February 27.

In an interview earlier this week, Turkey’s Prime Minister, Ahmet Davutoglu denied that Turkey had any intent to invade Syria. According to the PM, it was unlikely that such a move would be supported by its Arab allies, which have already criticized Ankara for sending troops into northern Iraq.

At the same time, Davutoglu told CNN Turk that the Syrian ceasefire plan will not be considered binding if it threatens Turkey’s security, adding that Ankara will continue to fight the Syrian Kurds and ISIS, taking all the “necessary measures.”

In an Al-Jazeera interview this week, Davutoglu also admitted that Ankara was, in fact, supporting armed groups in Syria.