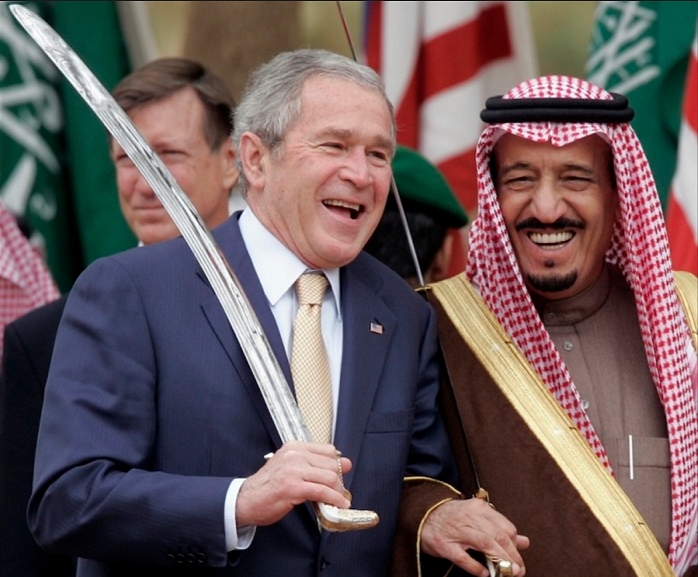 [ Editor’s note:  The backers of world terrorism, rulers of tinpot police states, take offense and Iran and Hezbollah.  What is it that Jim W. Dean says, “You just can’t make stuff like this up?” … Gordon Duff ]

[ Update: I just did the headline story on this for Press TV’s Top Five. We need to let these Gulf States know they have crossed a red line, the attempt to tag their own targets of terrorism in retribution for their resisting successfully. The soft under belly with these folks is phone campaigns into their embassies and consulates letting them know that you know about their being state sponsors of terrorism and they should be made to pay for it.
–
They are not used to dealing with public protest as their issue are normally under the radar. This is a very affordable tactic that does not take much time. Keep the calls shorts as all the log in and pass up the line was that you told them this dumb Hezbollah move motivated you to call to them them know who the real terrorist are… Jim W. Dean ]
____________
–
– First published  …  March 02, 2016 –
=

MOSCOW (Sputnik) – The decision of the Cooperation Council for the Arab States of the Gulf (CCASG or GCC) to designate the Hezbollah militant group a terrorist organization is a “historic” one, a member of the foreign affairs committee of the Saudi Arabian consultative Shura Council told Sputnik Wednesday.

“I think that today’s decision is historic, because when such a decision is made, it means the countries of the Council have come to the end of the tether, their patience has been exhausted, it’s enough of the Hezbollah and Iran’s actions behind its [Council’s] back,” Zuhair Harisi highlighted.

The decision of such a scope may have political and economic consequences even for Lebanon as a whole, he noted.

Hezbollah is a Lebanese Shiite political party and militant group established in the 1980s to fight Israel’s occupation of Lebanon. Besides the GCC, it is considered a terrorist organization by Israel and certain Western countries.

The Cooperation Council for the Arab States of the Gulf, a loose political and economic alliance, comprises the monarchies of Kuwait, Bahrain, Saudi Arabia, Qatar, and Oman.