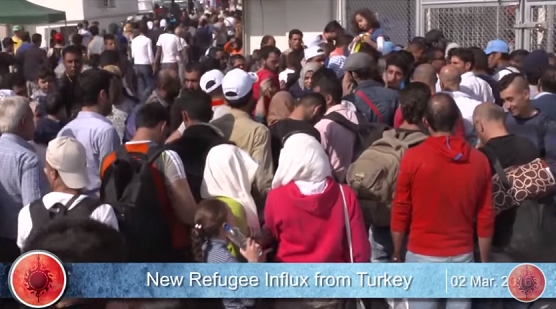 Visa-free regime for Turkish nationals in the Schengen zone could open a “gateway” for a new refugee influx to Germany, Vice-President of the Bundestag Johannes Singhammer told Passauer Neue Presse on Tuesday. Citing Foreign Ministry figures, he said that more than 200,000 Schengen visas are being issued annually by German consulates and visa centers in Turkey.

The UN refugee agency (UNHCR) warned Europe on Tuesday of an imminent humanitarian crisis as the number of refugees in Greece in need immediate help reached 24,000. According to the UNHCR, as of Tuesday, almost 132,000 people had crossed the Mediterranean Sea to reach Europe during January and February, of whom over 122,000 had arrived in Greece.

Around 150 migrants, some armed with iron bars, have attempted to block or climb lorries traveling towards the Eurotunnel, as clashes with police continued into the night in chaotic scenes surrounding the Calais refugee ‘Jungle’ camp in France on March 1.

Saudi Arabia has acknowledged that the US-led anti-ISIS coalition has held a “political” discussion about a potential ground troop deployment in Syria. An aide to Saudi Arabia’s defense minister, Brigadier General Ahmed Asseri, confirmed the coalition debated placing ground troops on the ground in Syria during a ministerial meeting in Brussels last month.