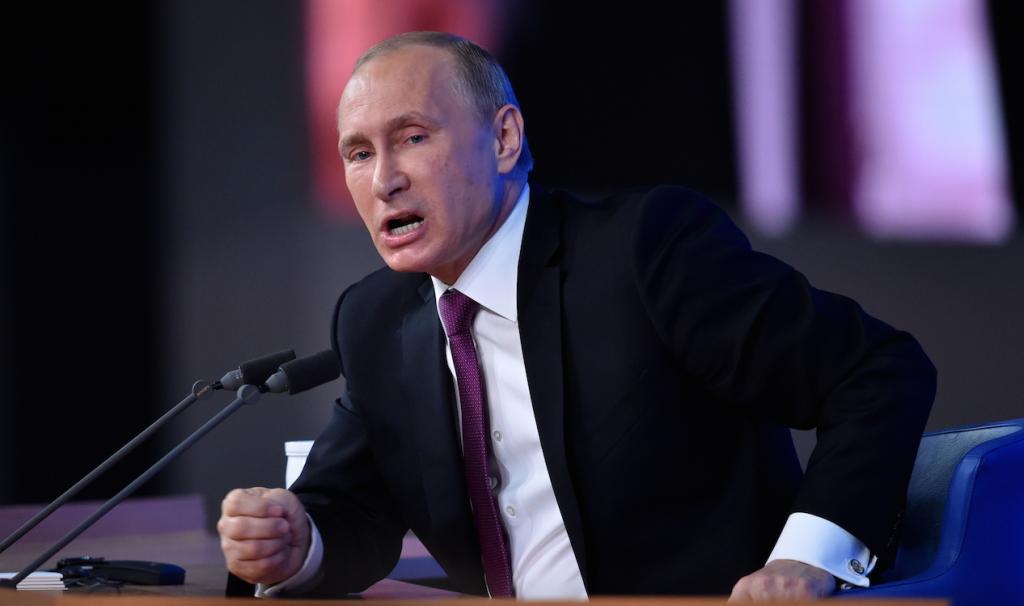 “Instead of the triumph of democracy and progress, we got violence, poverty and social disaster. Nobody cares a bit about human rights, including the right to life.” – Vladimir Putin – UN Address, Sept. 28, 2015

We have watched an incredible shift in Western anti-Putin propaganda, which reached hysterical levels early after the Western coup in Kiev was not able to consolidate its power over the entire country.

It seems the largely Russian-heritage population in East Ukraine did not want to go under the boot of fascistic neo Nazis. But on Ukraine, NATO, the US unipolar domination and Syria debacle, Mr. Putin has been proven right.

The Crimeans. reading the tea leaves early. asked Russia for help, which had little interest in losing its major Black Sea base to NATO’s new proxy in Kiev after paying the rent for ten years in advance to assist in Ukraine’s economic woes. When its coup failed in securing the country, the West screamed bloody murder to put the blame on invisible Russian commandos and armored divisions, which no satellite or drone images ever confirmed. Even US Congressmen got suckered using old Russian tank column photos fed to them from the Georgian-Ossetia war.

Russian advisors were there for sure, as military advisors are everywhere within conflicts. Russian volunteers had crossed over to fight in Ukraine, just as Western neo Fascists had, and the usual Blackwater type US defense private contractors.

But Putin never swept across Ukraine in three days as U.S. General Breedlove had claimed was planned. OSCE observers on the Russian border for the planned military exercises there reported over and over that they saw none of the preparation needed for a major offensive.

Regardless of the debunking of Breedlove’s hoax, that was followed by more NATO the silliness about Putin’s goal to retake the Soviet Union’s former East European territory, something that is now looked back on in embarrassment by the Intel community that something so ridiculous would be said publicly which undermined public trust in the stated purpose of NATO.

Western leadership debased itself by using what many ironically now call old-school Soviet propaganda tactics against Russia and Putin. Why were so many so brash in their Putin bashing? My answer is that their focus polls told them that Westerners had no real feeling about who Putin was, nor how most of Russia felt about him.

While the pro-European segment of the population, funded by the CIA and a variety of NGO fronts led the charge against Putin’s repression, the polls finally showed the color revolution crowd was not even in the major opposition in Russia, at only 11%. The communists were at 18%.

Putin has the highest domestic ratings on any statesman on the planet, with Lavrov just behind him. So the Putin the demogouge hype was along the lines of the Iranian nuclear weapons threat, a pure Western psyops to get the public pumped up to support a future conflict.

Putin’s biggest weapon in breaking down the wall of anti-Putinism was his never-ending press conferences, where in both length and scope he covered material that no Western politician would ever dreaming of doing.

Mainstream corporate media has not covered these well, as the material is too damaging to the negative propaganda image they have worked to help build against Putin.

His end of the year 2015 Valdai press conference was a sterling example of the Western media’s lying by omission. I meet no one outside of very active alternative media people who had ever heard of Valdai or Putin’s history of addresses and his famous Q&A sessions.

So I wanted to do a highlights piece for not only NEO, but to be able to republish for Western audiences. The video footage shows middle-aged people sitting on the edge of their chairs with laser focus, almost like people at a John F. Kennedy address.

If jealous Western leaders wanted a valid reason to hate Putin, the best I have seen so far is the contrast in both style and content that he represents to them. There are many names for it, but in the US the term “bush leaguer” comes to mind — people claiming to be in professional sports, but playing for a team or league that no one has ever heard of.

The theme topic for the 2015 Valdai conference was “Societies between War and Peace: Overcoming the Logic of Conflict in Tomorrow’s World”. Geopolitical experts and media people from thirty countries attended, many of them alumni from over ten years of meetings. I highly recommend checking out the Valdai website. The one Putin speech has more gem quotes in it than you will find in a year’s worth of the NATO brand. His full speech and the Q&A are both available.

I will start with Putin asking former US Ambassador Jack Matlock about the consequences of the US withdrawing from the Anti-Ballistic Missile Treaty, where Matlock objected to the withdrawal but did not think it should pose a threat to Russia.

Putin reviewed that the phony Iran nuclear threat was used like a strawman threat for its being able to nuke European countries, yet that lie was exposed in the successful conclusion of those talks, without even Israel submitting evidence of a secret program.

With that phony threat exposed to the world in 2015, we learn that the Russian claim that it was pointed at that is exactly the truth. The missile shield locations close to Russia could easily be converted to cruise missile first strike capability, and with mini-nuke warheads can be used for decapitation strikes.

An anti-missile screen deployment is all about protecting oneself from retaliation to a Pearl Harbor-type sneak attack — about as serious a threat as there is.

As to the question on the mess in Ukraine, Putin reviewed how the West had supported the election of Yuschenko via a third round of voting that was flagrantly unconstitutional. And this was followed by the violent Western-backed Maidan coup after Yanukovych had agreed to the protesters’ demands.

After Russia had worked with both the Yuschenko and Tymoshenko governments, including continuing subsidies to Ukraine, the West imposed sanctions on Russia for protecting the Russian people in Crimea against the murdering thugs in Kiev. Putin reviewed not only the US involvement in financing opposition in Ukraine, but Russia, also.

This brought up the subject of the US’ and NATO’s intentions toward Russia, where NATO does its stand-up comedy routine claiming that its advance toward Russia’s border should not be viewed as a hostile attack, but as validation that it would come to the defense of Eastern European countries if they were attacked by Russia.

Putin reviewed that during the talks on German reunification, the German partner that Europe’s future should also be settled so as to not kick that can down the road, which is what happened.

“Mr. Ambassador [Matlock], your colleagues did not reach agreements then on the basic principles of what would follow Germany’s reunification: the question of prospective NATO membership for Germany, the future of military infrastructure, its forms and development, and the coordination of security issues in Europe.

Oral agreements were reached back then, but nothing was put on paper, nothing fixed, and so it went from there.

But as you all recall from my speech in Munich, when I made this point, back then, the NATO Secretary General gave the oral assurance that the Soviet Union could be sure that NATO – I quote – would not expand beyond the eastern borders of today’s GDR. And yet the reality was completely different. There were two waves of NATO expansion eastwards, and now we have missile defense systems right on our borders too. “

There is an old saying among attorneys that agreements are made to be broken, and in this case, verbal ones certainly were. And this seems to have become a habit with the West, which hawks freedom and democracy like a snake oil salesman, while subverting non-threatening countries and fomenting regime change for any profitable purpose that some elite group aspires to. The American people certainly have not signed on to any of these offensive actions.

The question on Minsk2 found Putin well prepared to give a round down on the devious tactics of Kiev. Concerning the constitutional amendments agreed upon – that they should be made with the agreement of the unrecognized republics – the agreement has not been honored. The substitute passed was not permanent, but for just three years.

Kiev had to pass a new elections law with the agreement of the republics, which was also not done. It then went ahead and passed one for the rest of Ukraine that did not include the republics, an overt violation of the Minsk accords. The amnesty provision was ignored, and the special status for the republics was ignored by adding article 10, saying that it would only come into effect after elections. But the elections provision had been subverted.

Kiev and its various lawyers and Western backers had a good laugh over this, knowing that most of the Western public would never know the outright fraud their governments oversaw with Minsk2. One might ask how could anyone ever justify signing any agreement with the Kiev coup-meisters and their EU and US bosses, which is a very good question.