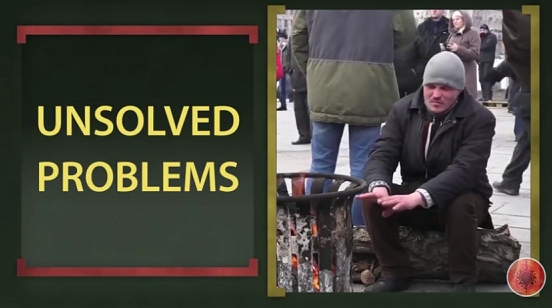 Europe is continuing to get bogged down in a political swamp. Contradictions between the national interests of the EU member states and the political course of a supranational bureaucracy have turned into a phase of sharp struggle.

Today the EU gets struck by:

However, EU citizens are being intentionally misguided and mislead in both identifying and dealing with all of these challenges by their governments.

In the pursuit of upholding the interests of the international banking cartel and the geopolitical machinations of a few in the US elite, the Euro bureaucracy leads the EU to an inevitable collapse.

Calls for reasonable policies and the step-by-step development of the EU espoused by a number of European political forces cause only a hysterical reaction by Brussels and fierce criticism from the European mainstream media.

Critics are marginalized as a minority, meanwhile, real social and economic situations are suppressed.

The next striking example of the conflicts of interests of European peoples and the supranational European bureaucracy is the case of the Dutch referendum on the approval of the Association Agreement between the European Union and Ukraine, which will be held in the Netherlands on 6 April 2016.

Recently a similar Association Agreement was signed with Moldova. The economic and social situation in the country has deteriorated dramatically after the signing of the agreement. After the EU visa-free regime was proclaiming, every third adult citizen of Moldova went to work in EU countries or had already done so prior to the agreement. Almost all of them are employed in unskilled labor.

The current migration situation in the EU is disastrous, both because of the mass influx of refugees from the Middle East and North Africa, and the flow of migrants from Eastern and South-Eastern Europe.

Meanwhile Brussels aggressively promotes an Association Agreement with the Ukraine, where more than 42 million live with an average monthly wage of $ 120, and monthly pension of $ 40. Poland, Germany, the Czech Republic, and Hungary have already faced the problem of an acute influx of Ukrainian migrants.

When a visa-free regime is adopted, a large mass of working age Ukrainian people will rush to Western Europe to find any opportunity of a better living. If we look at the Moldovan precedent, where the standard of living is higher than in the Ukraine, it is possible to predict the flow of Ukrainian immigration at the level of 5-8 million people in the first 3 years after the visa free regime is established.

This fact is well understood by a number of social and political movements of various European countries.

Maybe the European Union bureaucracy is striving to replicate the US immigration experience, and we are observing the conscious behavior aimed at bringing into the EU as many able-bodied immigrants as possible, in effect a kind of social global engineering program.

Dutch civil society has risked an initiative to contest the issue through a public discourse, its passage dependent upon the results of a national referendum. In the event of a valid vote against the Association Agreement, the Netherlands Parliament has to enact a new law to repeal the Agreement or provide for its entry into force.

Opinion polls in the Netherlands show that between 50% and 75% of pollees are against a hasty border opening for one more depressed Eastern economy.

In its turn, the European bureaucracy, which has taken the full political responsibility for the fate of the Ukrainian regime, has no other way but to push the Association Agreement with Ukraine.

The situation becomes more complicated, because the Ukrainian regime has shown a complete failure over the past 2 years.

Under these ambiguous circumstances, the European authorities have found only one way out – to launch a broad propaganda campaign in the Netherlands against the referendum with the full complicity and resources of the mainstream media. They refused to listen to the masses of the people, and thus propose a phased plan for EU integration with the Ukraine, taking into account the existing unsolved problems, whether they be in the Ukraine or the EU.

Pro-referendum rights activists are unable to express their views in any of the mainstream or state-backed media. The referendum initiators are under stiff psychological and physical pressure, however; the upcoming parliamentary elections in 2017 in the Netherlands, as well as a tough stance on the part of the referendum activists, are stifling European Union bureaucracy initiatives.