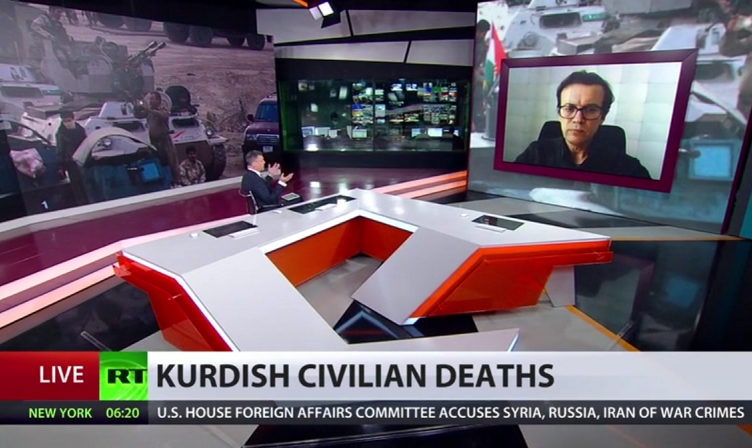 Reports have emerged that Kurds have shot down a helicopter over Iraqi Kurdistan, which they say was used in airstrikes against them. Turkish officials have made no comment, but a source confirmed to RT that the incident took place.

One sortie apparently went wrong for a Turkish assault helicopter as Iraqi Kurdish militia claim they shot the aircraft down.

Kani Xulam, from the American Kurdish Information Network, told RT that official Ankara would refrain from reporting any losses in operations against the Kurds, striving to portray the Turkish military as “an invincible power that cannot be beaten.”

The Turkish authorities are aiming to make the Kurds submit to them and “come down on their knees,” he said.

Xulam said “scores of Turkish soldiers” were taken prisoner by the Kurds with the Turkish government never acknowledging such facts.

In the case of the allegedly downed helicopter, there is no reference about the incident in Turkish media, yet the story is now emerging in Kurdish media, Xulam said.

The Kurdish PKK militia, which may be responsible for the alleged downing of the Turkish helicopter, traditionally remains idle during the harsh winter months. However, it will be active from the beginning of spring, which explains why Turkey has recently been shelling Kurdish positions in the mountains, Zulal said.

With the military operation against the Kurds ongoing in Turkey for months now, the violence is likely to escalate further, Zulal predicted.

The Turkish military has been operating against Kurdish PKK militia in northern Iraq since the early 1990s.

In September 2015, the Turkish parliament prolonged a mandate allowing the deployment of its military in neighboring Syria and Iraq to fight Kurdish militants.

Tensions have recently spiked between Ankara and Baghdad after Turkey deployed more than 100 troops equipped with tanks and artillery to Iraq’s northern Nineveh governorate, saying they will train forces battling Islamic State (IS, formerly ISIS/ISIL).