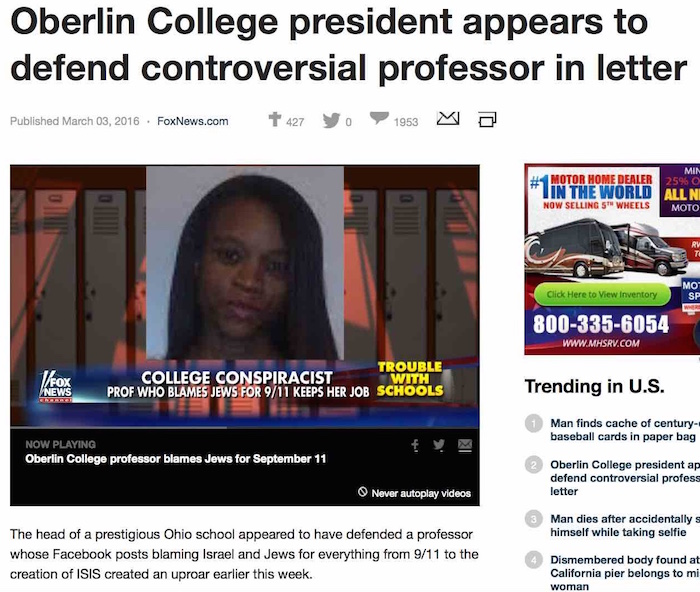 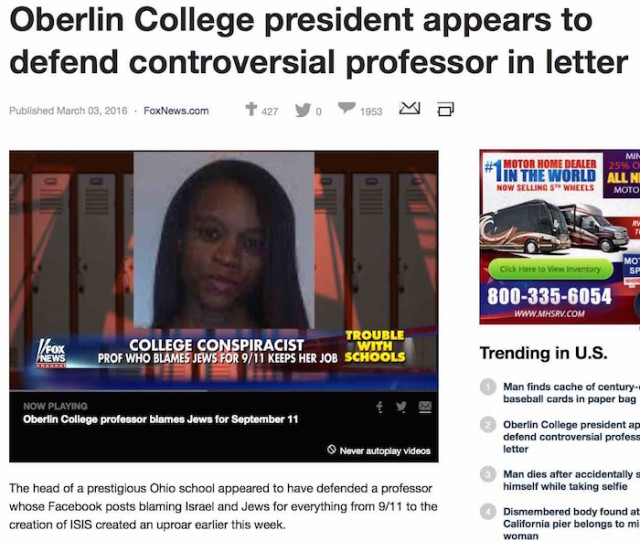 A rabid little Fox is drooling and gnashing its teeth.

But that hasn’t stopped Oberlin College from respecting the academic freedom of Professor Joy Karega, who is being witch-hunted by the neocon-Zionist network for speaking honestly about 9/11 and the two 2015 Paris false flags.

According to the outraged Likudnik tabloid the New York Post:

Karega … wrote on numerous Facebook posts that she believes Israel was the mastermind behind numerous terrorist attacks around the world including 9/11 and the Charlie Hebdo slaughter in Paris.”

“I am a practicing Jew, grandson of an Orthodox rabbi. Members of our family were murdered in the Holocaust. As someone who has studied history, I cannot comprehend how any person could or would question its existence, its horrors and the evil which caused it. I feel the same way about anti-Semitic conspiracy theories. Regardless of the reason for spreading these materials, they cause pain for many people — members of our community and beyond … I am also the son of a tenured faculty member at a large research university. My father instilled in me a strong belief in academic freedom. I believe, as the American Association of University Professors says, that academic freedom is ‘the indispensable quality of institutions of higher education’ because it encourages free inquiry, promotes the expansion of knowledge, and creates an environment in which learning and research can flourish.”

On Monday, I had emailed a debate challenge to the Oberlin student newspaper,Krislov and 17 other key Oberlin professors and administrators. Perhaps it had helped sway Krislov. Here it is:

To the administrators, faculty, staff and students of Oberlin College (emailed 2/29/2016)

It has come to my attention that a member of the Oberlin faculty, Professor Joy Karega, is being witch-hunted by the same forces that drove me out of the University of Wisconsin-Madison in 2006. Specifically, Professor Karega is being hounded for suggesting that the Charlie Hebdo attacks may have been a false flag event, and that Israel and its extremist Prime Minister may have helped orchestrate the crime.

Such views may sound odd or unusual to uncritical consumers of Western mainstream media. But in fact they are both widespread and well-supported by considerable evidence.

Globally, a substantial majority of Muslim intellectuals, as well as those non-Muslim intellectuals who follow alternative media, would tend to agree with Professor Karega. Their interpretation is supported by evidence presented in a book I edited, We Are NOT Charlie Hebdo: Free Thinkers Question the French 9/11.

In that book, which features 22 leading public intellectuals representing a wide variety of backgrounds and viewpoints, bestselling Israeli author and investigative journalist Barry Chamish – a right-wing Zionist himself – suggests that Netanyahu should be considered a key suspect in the apparent false flag attack on the Charlie Hebdo offices. Evidence for that interpretation is presented in several of the essays.

As the editor of We Are NOT Charlie Hebdo and its follow-up volume ANOTHER French False Flag?  I would be happy to visit Oberlin to participate in a debate or symposium about these critically-important issues. Those who disagree with me (and with 40 leading public intellectuals represented in the two books) should be eager to defend their views using logic and evidence rather than ad hominems.

If Professor Karega’s critics are not willing to participate in a free and fair debate, their hysteria and name-calling ought to be of no concern to educated people, including the Oberlin College community.

Student groups interested in sponsoring such a debate or symposium may contact me by email at kbarrett(at)merr[dot]com.

Also, I would like to offer copies of We Are NOT Charlie Hebdo and ANOTHER French False Flag at half price to members of the Oberlin community. If you’d like a copy, simply email me at kbarrett(at)merr[dot]com from an Oberlin.edu address.

As of Thursday, I had not heard back from any of the 19 Oberlin recipients. So I decided to compose another missive, this one directed to Marvin Krislov.

Thank you for standing up for academic freedom in your recent statement implicitly referring to the witch-hunt of Professor Joy Karega.

As a human being, and the son and grandson of human beings, who has studied history, I cannot comprehend how anyone could question the existence of that Holocaust known as World War II, in which more than sixty million of our fellow humans were murdered. Nor can I understand how anyone can question the evil which caused that war, namely British imperialism, with lesser contributions from other imperialisms. (All realist historians acknowledge that the two World Wars were essentially the same war, launched by the British to pre-emptively destroy a rising German empire.)

Nor can I understand why anyone would single out some World War II victims as more worthy of remembrance than others due to their ethnicity. And I certainly cannot understand why the debate over various details about World War II outlined in Thomas Dalton’s Debating the Holocaust has been criminalized in many European countries and rendered taboo in the American academy.

You write that you are similarly nonplussed by “anti-Semitic conspiracy theories.” Are you referring to the theory that 19 young Semites, led by an older Semite on dialysis in a cave in Afghanistan, blew up the World Trade Center by using box-cutters to kindle minor office fires?

I, too, am outraged by anti-Semitic conspiracy theories. Today virtually all of the world’s Semites are the speakers of Arabic. (“Semite” is a linguistic category, not a racial one.) And I am outraged by the way Arabic Semites have been falsely blamed for the controlled demolition of the World Trade Center, the murders of innocents by large white paramilitary professionals  in Paris and San Bernadino, and many similar false flag incidents. These false flag public relations stunts have triggered the murder of more than 1.5 million people and the destruction of the homes and lives of tens of millions more. THIS is the real, indisputable and ongoing Holocaust; you and your colleagues are perpetrating it right now with your tax money, your silences and your lies. The blood of more than a million innocents is on your hands.

So while I appreciate your support for academic freedom, I respectfully request that you take the next step and sponsor a debate or symposium on false flags in general and 9/11 and the 2015 Paris attacks in particular. If you or anyone else believes they can defend the 9/11 Commission Report, or the official versions of the Paris attacks, in a debate, they should be not just willing but actually eager to put the “conspiracy theories” to rest.

I will be happy to travel to Oberlin at my own expense to participate in any such debate. Meanwhile, I am sending my three books Questioning the War on Terror, We Are NOT Charlie Hebdo, and ANOTHER French False Flag as a gift to the Oberlin College Library, where faculty and students can refer to them to understand the positions of Professor Karega and the hundreds of millions of people around the world who share her interpretations of current events.