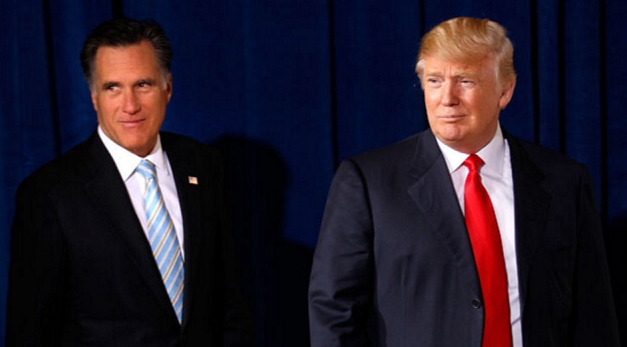 I just finished listening to Mitt Romney and Donald Trump trade barbs.  Lets begin with the level of absurdity here, both are Vietnam War draft dodgers of the highest and most despicable level.  Both have very strong and lifelong ties to organized crime.  Both have made their personal fortunes through chiseling and inheritance.

Let’s also face a truth long forgotten, the GOP is entirely run by Sheldon Adelson, a Macao gambling boss with a history we can’t begin to discuss and still hope to get into a car without the help of the bomb squad.  Aiding them are the evil twins, the Koch brothers, indescribable monsters.  They run the Republican Party and only escape being called “organized crime” because they are bigger and more powerful than organized crime and far more dangerous.

The mob shakes down candy stores, these creatures and the politicians they own, 350 members of congress and 22 state governors, whose strings they share with the drug cartels, oil companies and Wall Street, are the real terrorists, they are ISIS, they are al Qaeda, they are war incarnate.

While pointing the finger at Hillary or George Soros, easy targets I admit, they are the planners of Libya, Benghazi, the backers of Boko Harum, of Al Qaeda and ISIS.  When you want to grow up and ask hard questions, ask yourself why the bloated neocon princess, wife of the Kagan brothers, was anointed by Hillary Clinton to destroy Ukraine.

The rats are picking Ukraine clean while their fascist politics, with the help of a carefully orchestrated refugee crisis, is taking down Europe.  Take the 6 minutes and 27 seconds and sit through the South Front video.  Begin to think about the state of the world when while we are bankrupting Russia and pushing China into war, our “allies” are this pack of clowns:

I do so enjoy listening to Trump.  These things I can tell, he has a low order intelligence, is deeply flawed and essentially a caricature of himself, a cartoon of a cartoon.  He is also two of Mitt Romney and godlike in comparison with Kasich or McCain or Jeb Bush.

Romney truly believes he can step into the presidency and there is a reason he has his hopes.  The GOP is feeding the Justice Department their files on Trump.  Romney looked really good, rehearsed, his spray tan gleaming, his suit a bit understuffed.  I remember Bush 43 and his huge bulletproof suit, covering his fat behind and narrow shoulders, an attempt to balance out his look between apish and “Gollum.”

Romney, on the other hand, does look really good and, if you listen to Trump’s speech, his “on his knees” comment, I begin to ask a question or two about Trump.  Then again, in a nation ruled by pedophiles the idea of questioning the nature of any adult on adult relationship or human on human, if that term is clearer, violates America’s real moral standards such as they are.

In 2012, friends in the FBI came to VT with proof of Romney’s complicity in organized crime, drug running with his partner Carlos Salinas and his backdoor deal with Castro and the “KGB.”  The recordings of the interviews are on YouTube.

Whatever my own opinion of Trump, he is head and shoulders above the GOP crowd and has introduced a new level of clarity of speech to American politics.  The only problem I have is that much of what he says is poorly considered and the result of “pressure of speech” brought on by what I can only guess is ADD.  I don’t think he really means the crazy things he says and is much less a “danger” than he sounds.

I also don’t see him as having any administrative ability or personal energy, which still puts him ahead of the pack.

As for the Democrats, right now it is Hillary, and as it looks, unless she is murdered, she will be president.  Her domestic agenda is outstanding but it is also clear she is being “operated” as far as foreign policy by a hidden force that doesn’t like the United States very much.  That said, simply talking about this, especially those of us who are getting older and who are totally stupid, this is painful.  I remember Ike, Nixon and Reagan, poisonous toads who should have been strangled in the crib yet were miles beyond “W,” the greatest human monstrosity of our era, any nation, any species.

The real risk with Trump is that the mob can’t buy him and he doesn’t share the dreams of the rest of the GOP, buttered up little boys and dancing at the side of Tony Scalia, a gleeful exaltation to the angel of light.

VT is for the most part a boys club, not entirely, but as far as publications go, VT staffers are more bar fighters than bible thumpers.  There are truths in this, that memory we have and we hope we share with others, running the clocks back, for some of us to the eras of long dead presidents, Roosevelt (Prime Minister’s as well, such as Churchill), Truman, Ike and such.

It’s afternoon recess, we get the worn softball out of the box, the taped up bat and head out onto the playground.  Some kids stay behind, some play jump rope with the girls, perhaps developing skills others of us would wish we had gained.

Others hold onto teacher’s skirts waiting for the bell to allow them to return to the safety and warmth of their desks.  Those kids, the ones never picked, who left so many paths untrod, those are our national leaders.

When you look at the GOP candidates, Jeb or Kasish or Cruz or Rubio or Trump, even Romney, these are those kids, the ones we long forgot who reappeared later in life as backstabbing sneaks or the smiling faces for crime syndicates.

Tell me I am wrong.