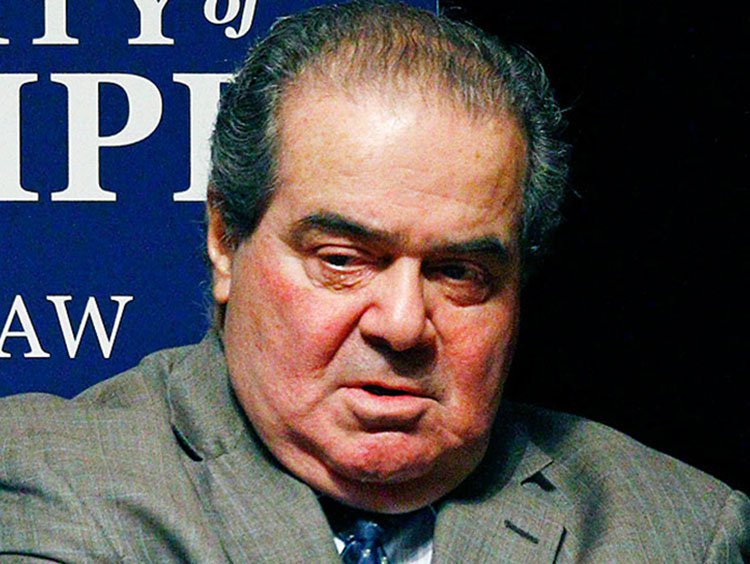 Of course, major mainstream and alternative media have rejected any mention whatsoever of the Veterans Today story “Scalia Murdered after Obama Meeting” by Gordon Duff and Ian Greenhalgh.  You too can verify this fact.

Of course, this could mean that the story is verified to be false – or that the story is so true and so politically explosive that mainstream and alternative media cannot mention the story, because someone might grow a brain.

Some if not many major and alternative media outlets will not even let readers post comments about VT’s “Scalia Murdered” story. Major Christian Zionist media outlet WorldNetDaily (WND) — a bastion of Tea Party and ‘Conservative’ conspiracy theories – twice rejected the following comment to two (2) old WND stories about Scalia’s murder. 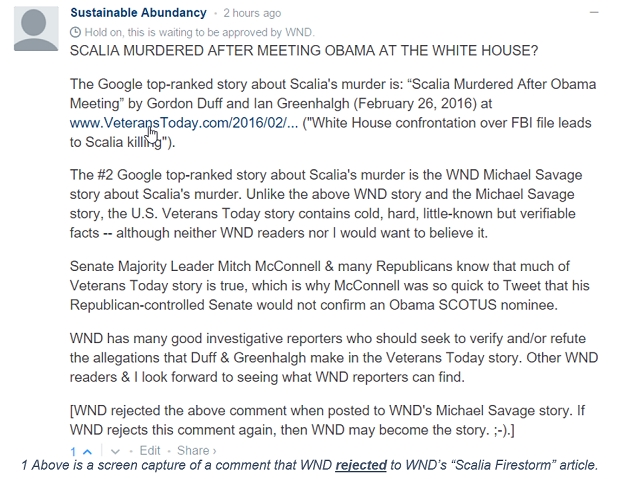 1 Above is a screen capture of a comment that WND rejected to WND’s “Scalia Firestorm” article.

In addition to knowing WorldNetDaily very well (including Dr. Jerome Corsi, a major contributing author at WND), I personally watched as WND took only 3 minutes to reject the above comment (the second of 2 comments that Sustainable Abundancy tried to post).

WND took ten (10) minutes to reject a prior similar comment to the WND “Michael Savage” article – which may mean that the WND comment censor needed to consult with WND Editor-in-Chief Joseph Farah.

Significant others offered several meetings with Farah during work on ‘my’ Iran stuff. See “Beavis & Butt-head ‘Do’ Iran – and World War 3” (“GW Bush & Bibi Netanyahu Thwarted Indigenous Iran Regime Change in Mid- to Late-2000s in Order to Favor a ‘Run Up’ to World War 3”). Jerry Corsi and I first met during this period. 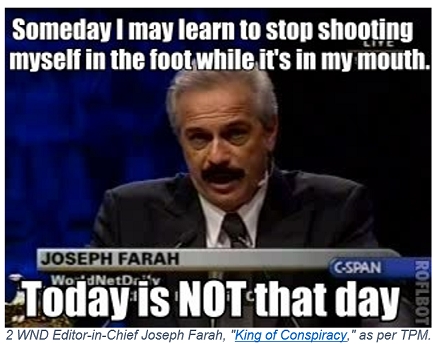 2 WND Editor-in-Chief Joseph Farah, “King of Conspiracy,” as per TPM.

In an interesting twist, for my cheap energy projects, others innocently offered me meetings with alleged pedophile Sterling David Allan, who plays a key role in the VT Scalia story.  I first encountered Allan’s name at a Tesla-type energy conference in 2003 – as a reputable due-diligence verifier for cheap energy inventions.

In 2009, when an over-unity energy inventor asked me to play a key role in his ‘New Energy’ company, DC area energy experts, engineers and a patent examiner suggested that I meet Sterling D. Allan in Utah to verify validity for these Utah-based cheap energy inventions.  Fortunately, I never spoke to, met with or corresponded with Sterling Allan.

Before graduating law school, I attended a few meetings of the Federalist Society (which also plays a key pedophilia-related role in the VT story), which was not appealing to me. Thus, I did not join the otherwise innocuous Federalist Society.

In another twist of near-personal involvement in alleged Scalia-type stuff, before our picnic with Abby Rockefeller on the Chase Family farm, a sitting judge once came to my home to show me sickening movies of pedophilia ‘that authorities had seized,’ the judge said. “Disgusting!” I said, while demanding that the judge stop the projector. A path to personal blackmail thus thwarted. Such sordid pedophilia-based blackmail of high-level government and corporate officials now appears to be somewhat commonplace. Disgusting! 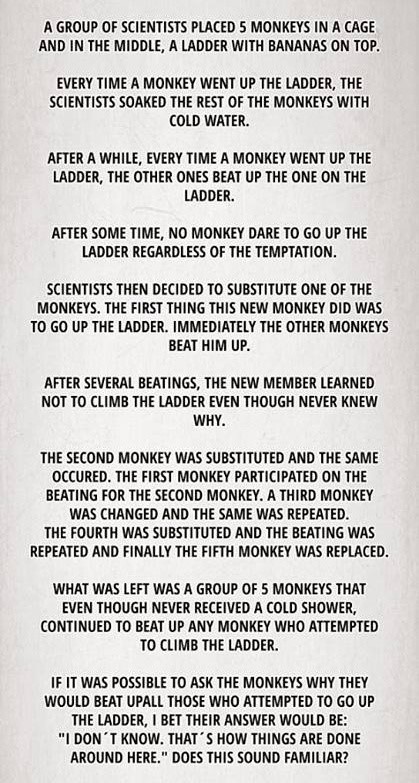 3 Ten Monkeys, Bananas, a Ladder and Connecting 9 Dots — Outside the Box

In retrospect, what was then an even more synergetic synchronicity may have been my connection to former FBI Los Angeles Bureau Chief Ted Gunderson, who investigated the McMartin Preschool pedophilia cases, the Johnny Gosch disappearance, and the Franklin Cover-Up, etc. Ted and I had many talks about 9/11 and related matters. In my first call to Ted, my name showed up on his Caller ID. Ted said, “I know your work” (although we had never spoken). Ted Gunderson, now deceased, was a good guy. I miss him.

In 1990s, after the Washington Times published major stories about a call-boy scandal at the GHW Bush White House, a now-DoJ official with whom I worked in another federal agency (DoJ = US Dept. of Justice) asked me to investigate a similar house near his home that was also ‘untouchable’ by the authorities.

In mid-2000s at a major National Press Club event, a Washington Post reporter introduced me to and ‘pawned me off’ onto bogus GW Bush White House correspondent Jeff Gannon – (supposedly a reappeared Johnny Gosch) to get me to stop asking questions of WaPo.

After my “Jade Helm: We Have Met the Enemy, and He Was Us,” “‘Stewed Web’: Dividing & Conquering Veterans+,” and “Jade Helm: From PsyOp to MindWar” articles at Veterans Today, what you too may want to consider is that all of these PsyOps are connected.

Those who promoted the “Jade Helm” PsyOp were in fact distracting us from other more important issues. Those who talked of the evils of pedophilia and baby killers but who still condemned a former FBI Bureau Chief who painstakingly investigated and exposed cover-ups of abductions and pedophilia-related blackmail were not only distracting us but also deceiving us – committing a fraud on our powerful Consciousness. Need I say more? 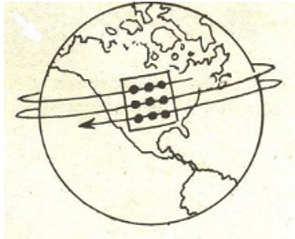 As per VT’s “Scalia Murdered” story, Obama and his political advisors may have expected Supreme Court Justice Antonin Scalia to resign after Scalia reviewed the overwhelming evidence against himself and others in pedophilia blackmail rings and/or in international pedophilia cover-ups. Instead, as per VT, those with whom Scalia shared the evidence chose to murder Scalia and to cover up the murder by ensuring that no one performed a real autopsy etc. on what might have been a ‘pillow snuff.’ The “Scalia Murdered after Obama Meeting” spin and cover-ups have now taken additional, not-so-Kosher and not-so-Halal, ham-handed twists and turns.  All trees, no forest.

Postscript: 12+ hours after WND first refused to post my first “Scalia Murdered after Meeting with Obama at the White House” comment to the old-but-still-popular WND “Savage” article about Scalia’s murder (at/@ 9:00amET on Tue-1-Mar-16), WND published my second virtually-same comment (as per the above screen capture) to the equally-old but unpopular WND “Scalia Firestorm” article. Of course, Savage’s ‘remedy’ is inadequate.

Therefore, one of these must be true: (1) ‘Coincidence Theory’ is now a proven scientific theorem that must be accepted as gospel truth; (2) NSA’s General Michael Aquino snooped our conversations and file transfers, then told WND; OR (3) VT ‘blackmailed’ WND with a threat that VT might publish the above article. On U.S. ‘Super Tuesday’ election day, I voted for Door #3. ;-).

Thomas J. Mattingly was an observer on VT’s recent trip to Syria and is a VT contributing author, a sustainably-abundant infrastructure and resource development executive, and an attorney targeted by Republicans due to his mid-1990s Nigerian-Muslim government work.