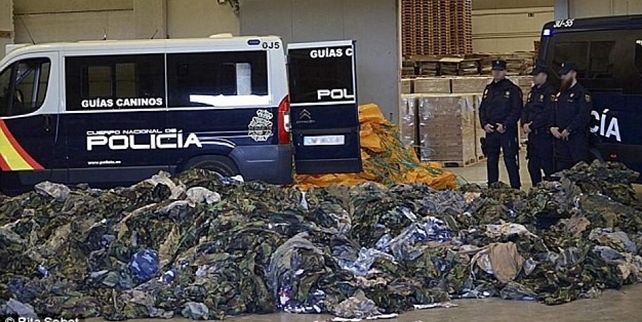 Up to 20,000 military uniforms hidden inside aid packages as second hand clothes have been uncovered after Spanish authorities busted a large scale smuggling ring to terrorist groups in Syria and Iraq. Security staff fear that the military goods were meant for ISIS in Syria and Iraq.

The ISIS camouflage fatigues were discovered following routine inspection by custom officials in Valencia and Algeciras.

At these ports, inspectors found other military gears which they believe the senders were planning to deliver to al-Qaeda linked Jabhat al-Nusra and ISIS in Syria and Iraq.

‘The containers which carried the military uniforms were declared as second-hand clothes so as to not raise suspicions and be able to pass different customs inspections without any difficulty,’ a statement read.

Spanish security did not confirm the intended final location for the cargo but it is thought the bust may have been linked to the arrest of seven smugglers in Spain last month.

The arrests were carried out in the eastern cities of Valencia and Alicante and in Spain’s North African enclave of Ceuta, the police said in a statement.

The arrests were made in the context of an investigation launched in 2014 into ‘foreign structures’ providing logistical support for ISIS and Jabhat al-Nusra.

The interior ministry warned that the latest discovery emphasised Spain’s growing concern over the illegal smuggling of goods to Syria and Iraq.

‘With the roughly 20,000 military uniforms and accessories, it would have been possible to equip an entire army, which would be ready to enter into combat in any of the battlegrounds which terrorist organisations have round the world,’ it said in a statement.