Cliven Bundy in jail, Pete Santilli in jail and Alex Jones curiously not even questioned.

The FBI escalated its investigation into Nevada rancher Cliven Bundy’s 2014 standoff with the federal government Thursday with sweeping raids across the country that resulted in 12 arrests, including that of a Donald Trump campaign coalition co-chair in New Hampshire.

Two of Bundy’s sons were also among those arrested, amid signs that federal authorities are ramping up their efforts against the ultra-conservative, anti-government movement that also inspired the armed standoff in Oregon earlier this year.

Cliven Bundy had long refused to pay fees to the government to allow his cattle to graze on federally controlled public lands – a dispute that escalated to an armed standoff in 2014 when officials tried to seize his livestock. Hundreds of anti-government activists, some heavily armed, flocked to Bunkerville to support the Bundys, and the government ultimately backed down. 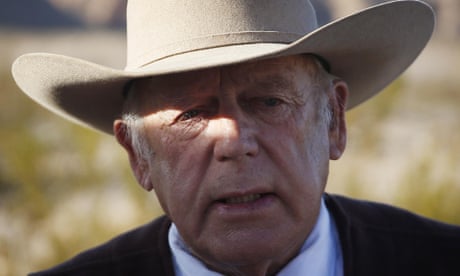 A federal grand jury last month indicted Cliven, 69, and his two sons Ammon, 40, and Ryan, 43, on a slew of felony offenses – including armed assault of law enforcement officials and conspiracy against the government – for the high-profile land-use dispute at the Bundy ranch in Bunkerville, Nevada.

The latest arrests mean five members of the Bundy family, Cliven included, are in jail awaiting trial. If convicted, they could each face decades in prison.

Ammon and Ryan Bundy have also been indicted over the standoff in Oregon,which lasted 41 days.

Now two more sons of Cliven – Davey, 39, and Mel, 41 – have also been arrested in a coordinated operation that also involved the arrest of Jerry DeLemus, a 61-year-old New Hampshire co-chair for Trump, the Republican presidential frontrunner.

Those three, along with 11 other new defendants, now face prosecution for their participation in the conflict over government land restrictions. The charges include conspiracy to impede and injure federal law enforcement officers, threatening and assaulting officers, obstruction of justice, interfering with interstate commerce by extortion, and use of firearms for a violent crime.

The stunning turn of events on Thursday brought the total number of defendants in the case to 19 and indicates that federal prosecutors are aggressively targeting the Bundy family and their rightwing supporters who have for years protested against the federal government’s regulations on public lands.