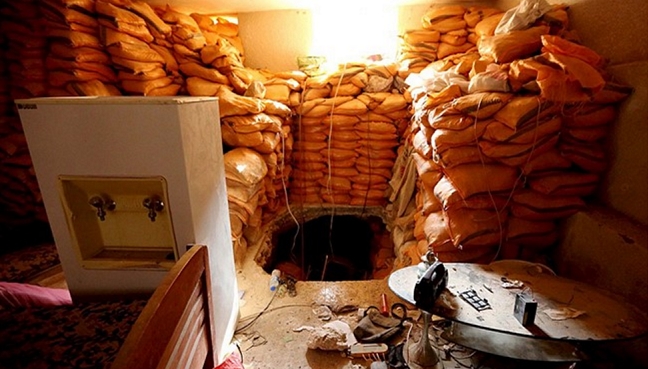 Although 70 tunnels have been uncovered, Kurdish and Iraqi forces remain concerned that more secret layers may have been constructed in other parts of the town.

A deep network of underground tunnels have been uncovered in Iraq, revealing how ISIS (so-called Islamic State, IS, ISIL or Daesh) have been carefully maintaining escape routes for its terrorists as they try to avoid airstrikes.

The tunnels were discovered by Kurdish forces when the Peshmerga managed to re-take the Yazidi majority town of Sinjar last December.
Burrowing deep into the ground, some of the chambers are thought to be 30 feet deep, allowing ISIS terrorists to hide out and move freely out of the way of airstrikes.
Although 70 tunnels have been uncovered, Kurdish and Iraqi forces remain concerned that more secret layers may have been constructed in other parts of the town.
‘There is a tunnel under every alley, street and public building that remains intact,’ Wais Faiq, head of Sinjar town council told the International Business Times.
Mr Faiq said that ISIS had ‘dug so many to the extent that they completely destroyed the infrastructure of Sinjar.’

The tunnels remain in a precarious state with concerns remaining that parts of the labyrinth of corridors may have been rigged with explosives, according to Daily Mail.

The discovery was made more surprising when soldiers investigating the tunnels found that ISIS had even wired the chambers with electricity.

On 17 December, Peshmerga forces, backed by U.S.-led coalition airstrikes on ISIL positions, launched an offensive to liberate Sinjar and to break that partial ISIL siege of the Sinjar Mountains. In less than two days, the Peshmerga seized the mountain range. After ISIL forces retreated, Kurdish fighters were initially faced with clearing out mines around the area, but quickly opened a land corridor to those mountains, enabling Yazidis to be evacuated. The operation left 100 ISIL terrorists dead.

Late on 21 December, Syrian Kurdish YPG fighters south of the mountain range reached Peshmerga lines, thus linking their two fronts. The next day, the YPG broke through ISIL lines, thus opening a corridor from Syria to the town of Sinjar. By the evening, the Peshmerga took control of much of Sinjar.

During ISIS attacks to Sinjar, more than 5,000 Yazidi women captured and forced into sexual slavery. UN estimates ISIS still holds an estimated 3,500 people captive in Iraq, the majority being Yazidi women and girls.

More than 5,000 Yazidi women were captured and enslaved by ISIS forces when the militant Islamist terrorists attacked the city of Sinjar, northern Iraq in August 2014.