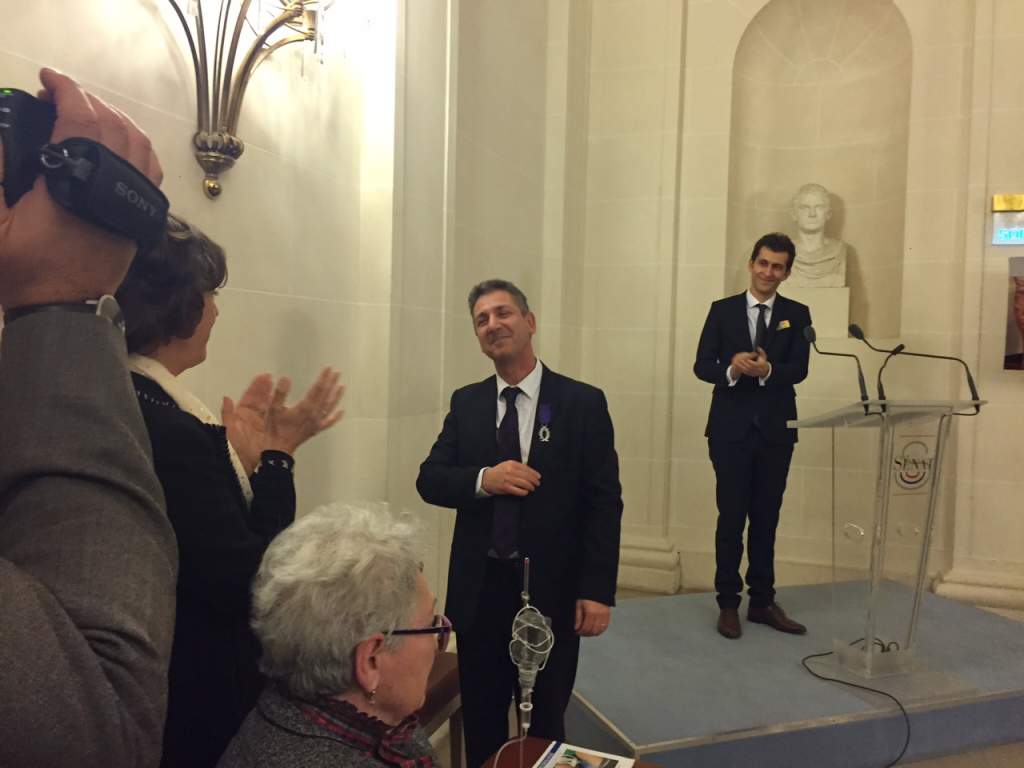 He has successfully performed sclerotherapy, using  Aetoxisclérol 1% in the form of  foam  for several  years. He has won the Palme Académique. This award  was established by Napoleon 1st and is awarded by decree of the Prime Minister, the Minister of National Education, Higher Education and Research every 6 months, in January and July. It is equivalent to the award of Legion d’Honneur for sciences.  Dr. Sica informed me that he was selected from 50 candidates and won the award for his teaching experience and the development of a simulator which is an artificial leg he uses to teach students.

In order to educate doctors in the technique of sclerotherapy, Dr. Sica gives courses to physicians internationally. He has presented courses of  two day sessions which include  initiation in the procedure, practice and perfecting the technique in foreign  countries including  Rio de Janerio Brail , Italy, Montreal, Canada, Vienna, Austria, and Russia.

Dr. Sica would like to educate medical physicians in the USA in this technique.

He is the co-author of a book in English about scoerosante health microfoam : « Foam sclerotherapy : state of the art Editeur : Editions Phlébologiques françaises (2002).

He also wrote a book in French about the practice.

Dr. Sica provided the following information to inform medical physicians and other interested people about the treatment of varicose veins.

For those suffering from varicose veins this procedure is an alternative to surgery for varicose veins and spider veins, and is  as efficient and more economical.  Sclerotherapy is performed in a physician’s office by using an Echo Doppler for the physician to . The patient can also view the veins on a large screen.  Afterwards a solution is injected into the blood vessels (veins) using very fine needles. The number of injections done in one session varies according to the size and locations of the veins. Often one leg is done at each session. The patient is awake and feels little or no pain. The veins treated disappear from view and new veins can reappear.

Sclerotherapy has made significant progress in fifteen years, notably due to the introduction of ultrasound guidance, sclerosing foam and the endovenous catheter. Today, this technique represents a real alternative to surgery of varicose veins and provides the same efficacy as the technical endovenous laser (LEV) or Closure.

Beyond the therapeutic performance, the decisive advantage of ultrasound sclerotherapy guided by foam is that it is an outpatient technique. It does not require a sterile field, anesthesia or work stoppage and thus at equal efficiency, is the most economic technique.

Having equal effect, T3 D ultrasound is an extension of classic 2D ultrasound. While 2D provides anatomical cross-sectional imaging, the three dimensional technique, due to the calculation of perspective projections allows the representation of 3D relief. 3D gives the acquisition of the surface, volume and panoramic vision, while maintaining the safety of the ultrasound examination.  Due to technological improvements of new ultrasound equipment with the HD and 3D, we can already before treatment:

– have a greater precision of ultrasound images

– visualize the saphenous trunk in its entirety in only one image and also view its winding path.
After treatment:

-control the filling of the entire circumference of the saphenous by the sclerosing foam.

The practice of the phlebologist:  3D should become a real tool to help make  therapeutic decisions to make a detailed account of the anatomy of each patient.

– Patient information:  the three-dimensional images are much clearer for the patient than 2D images and facilitate the explanation of treatment.

– Education:  3D offers, due to the reconstruction of volume, a considerable potential  for understanding anatomy and the ultrasound therapy technique.

However, the practitioner must be well trained, experienced and provided with powerful Doppler ultrasound equipment.

The technique of ultrasound-guided sclerotherapy by foam can be applied to saphenous axes of exceptional caliber of 12 millimeters.

To perform this technique with efficacy in saphenous axes of exceptional caliber, it is necessary to use powerful equipment and have acquired good experience and practice of ultrasound guided sclerotherapy with foam.

A study of 131 patients between 18 and 75 years of age (85 women and 46 men) was done.The inclusion criterion was that the saphenous axes (87 and 44 GVS VPS) were between 12 and 21 millimeters at the distance of 30 mm from the saphenofemoral junction.

In this study we obtained 96.3% of complete obliteration.

The persistence of the obliteration at the level of saphenous trunks at 12 months was 91.8%.

One case of DVT in the gastrocnemius vein was reported. This thrombosis was treated successfully by HBM.

Thanks to the constant evolution of technology and experience acquired in the work with ultrasound-guided sclerotherapy with foam and the endovenous short catheter we can affirm  that ultrasound-guided sclerotherapy with foam is able, today, to push the limits related to the amount of injected foam and consequently, the sizes of varicose veins which may be effectively treated. It successfully neutralizes the varicose veins of exceptional diameters.