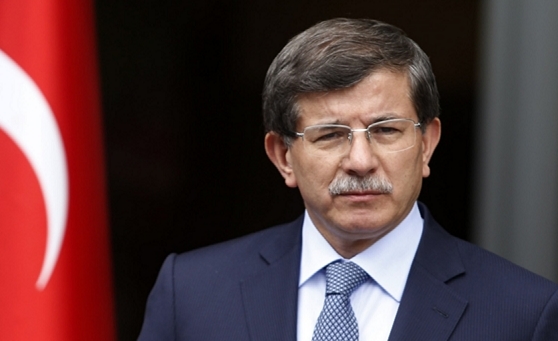 TEHRAN (FNA) – Iran and Turkey must develop a common perspective in order to stop outside powers from getting into the region, Turkish Prime Minister Ahmet Davutoglu said in Tehran on Saturday.
–

Speaking at a joint press conference with First Vice President Eshaq Jahangiri, Davutoglu said the easing of Western sanctions on Iran over its nuclear program means the two neighbors can easily exceed their previous trade target of $30 billion annually.

“I am delighted to see the nuclear deal on the table. I also did my best to help get the deal signed as former foreign minister of Turkey. In those difficult times we stood by Iran. We will continue to stand by Iran from now on too,” he added.

“Behind closed sessions we have already discussed upgrading the level of bilateral ties in order to boost cooperation in energy, banking, transport and tourism. By upgrading our ties we can also sit for talks and resolve our political differences in the region,” he said.

Davutoglu heading a high-ranking delegation arrived in Tehran Saturday morning to mark the first official visit by a Turkish premier in the wake of the nuclear Joint Comprehensive Plan of Action.

He is accompanied by ministers of economy, customs and trade, energy, transport, communications and development, government officials and representatives of major Turkish media.

The visit follows consultations between the two countries’ foreign ministries with the objective of expansion and strengthening of political, cultural, and economic relations.

It is expected that Davutoglu will also negotiate meet Foreign Minister Mohmmad Javad Zarif and pay a courtesy call on President Hassan Rouhani.

Considering the combination of the Turkish prime minister’s entourage, economic and trade issues will top the agenda of his meetings in Tehran including achieving the 30-billion-dollar outlook in Iran-Turkey commercial ties.

Turkey intends to give a new impetus to its trade ties with neighboring Iran following removal of sanctions thorough a more active role by its private sector in order to take the rising golden opportunity in Iran’s economy.

He is  also expected to discuss the sharply different views between Ankara and Tehran on the Syrian crisis.

Iran supports the government of Syrian President Bashar al-Assad, while Turkey is among his most outspoken critics and backs the armed opposition. Turkey is also close to Sunni Saudi Arabia, which has cut its diplomatic ties with Iran.

Despite their differences on Syria, Turkey and Iran have largely maintained cordial diplomatic relations over the years.

Russian Special Envoy in Tehran on Sunday to Discuss Syria

Russia’s presidential envoy on the Middle East and Africa and Deputy Foreign Minister Mikhail Bogdanov is expected in Tehran for talks on March 6-7, a high-ranking diplomatic source said on Saturday.

“The agenda includes a number of regional issues, including Syria,” the source told Itar-Tass. “The Middle East topics will be discussed on the whole.”

Besides, the source said, the parties will touch upon issues related to fighting terrorism, as well as development of bilateral cooperation between Russia and Iran.