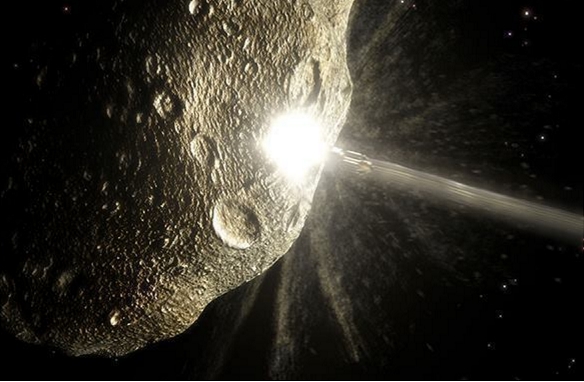 Potentially hazardous asteroid are still looming large in the minds of scientists engaged in planetary defense issues. Numerous strategies describing deflection of Near-Earth Objects (NEOs) have been proposed, including methods employing kinetic impactors, robotic mining or gravity tractors. However, one of the proposed concepts has been lately reconsidered by a team of researchers, becoming one of the most serious proposals.

The project, named DE-STAR (Directed Energy System for Targeting of Asteroids and exploRation), envisions a large phased-array laser in Earth orbit to deflect asteroids, comets, and other NEOs endangering our planet. There is also a much smaller, similar system being considered, called DE-STARLITE, that could travel alongside the target, slowly deflecting it from nearby over a long period.

According to the authors of these proposals, their goal was to create an orbital planetary defense system capable of heating the surface of potentially hazardous objects to the point of vaporization. They underline the fact that vaporization on the surface of an object continually ejects the vaporized material, creating a reactionary force that pushes the object into a new path. It can be accomplished by lasers deployed on spacecraft stationed near the asteroid.

The system should be capable of projecting a laser spot onto the surface of a distant asteroid with sufficient flux to heat a spot on the surface to vaporize solid rock. Currently, high power lasers deliver sufficient energy density on a target to melt and vaporize any known material.

“Generally speaking, the technology is available today. The main challenge with building a full DE-STAR is the necessary scale to be effective,” Qicheng Zhang of the University of California, Santa Barbara, one of the authors of the project, told Astrowatch.net.

Zhang and his colleagues claim that if DE-STAR had a 330-feet-wide phased laser array, it could divert volatile-laden asteroids 330 feet in diameter by initiating engagement at about two million miles. However, DE-STARLITE, being a much smaller and less expensive system, is the more practical option. For instance, a 20 kW version of DE-STARLITE operating for 15 years could deflect an Apophis-size (1,066 feet) asteroid at a distance equal to Earth’s diameter. A 1 MW version could deflect all known threats up to 1,640 feet in diameter with five-year laser activity.

According to the scientists, DE-STARLITE would be ineffective at deflecting targets on short notice due to the time required for transit to the target asteroid. Thus the DE-STAR system seems to be a last line of defense on short notice.

A full stand-off system like DE-STAR is still considered as a possibility for the more distant future for its ability to rapidly respond to identified threats. It could also provide one of the few options for defense against long period comets to which modern technology is often incapable of reaching by spacecraft.

An orbiting DE-STAR of adequate size would have the capability of reacting to small- or moderately-sized objects that are discovered with limited time to react. However, the researchers note that actual effectiveness of a deflection mission depends strongly on the target. A mission optimized for one target may be ineffective when applied to another, even one of the same size and composition.

“It depends on the exact circumstances. If, say, a 100-meter-wide asteroid were found today on a collision course with Earth next week, directed energy would not be a viable solution as that would require a very large laser array that would be far bigger than an equally effective single-use impactor or explosive. If, on the other hand, we find that same asteroid 30 years before impact, directed energy would be very effective, even with 10 kW lasers which are far below the power of many lasers in possession by the U.S. military today,” Zhang explained.

The concepts of DE-STAR and DE-STARLITE show that the directed energy method could be a promising technology for planetary defense. It could save our planet from small to mile class hazardous objects. With the recent technology advancements it is now feasible to consider the methods based on laser ablation as one of the most relevant and effective techniques of asteroid deflection.