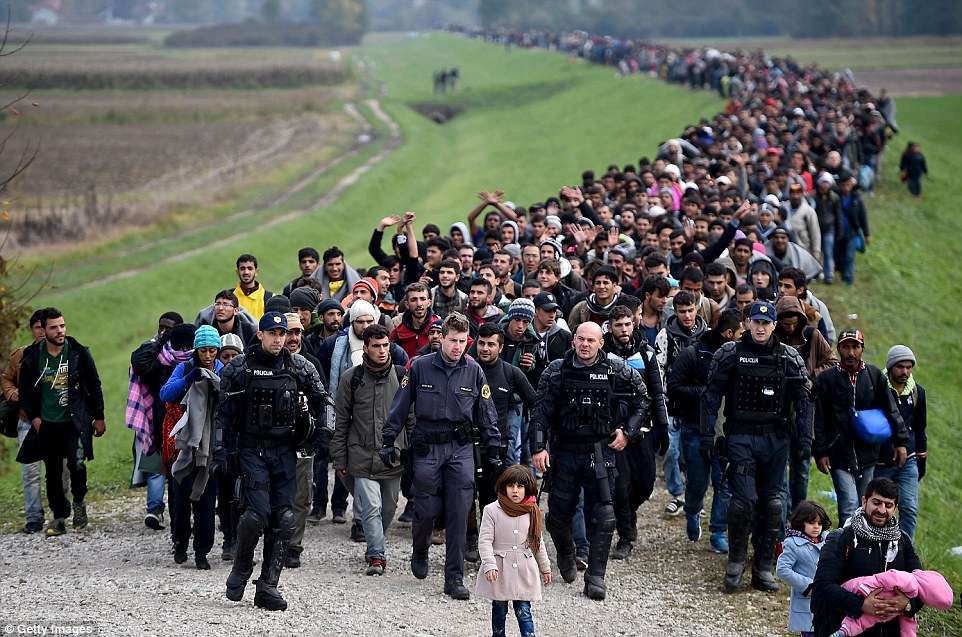 Breaking:  That EU is reporting via RT that Turkey is ready to stem the flow of refugees, but the details are fuzzy as Erdogan is using the refugees as blackmail for a faster process to get into the EU so it can flood Turks into the EU to sent Euros back home.

[ Editor’s Note: The worm is beginning to turn on the EU “tooth fairy” approach to the refugee crises, but the magic dust approach did not work. While pretending to be a group, it has used the Mediterranean countries as a human shield of sorts on the past year’s surge in refugees.

The whole event was orchestrated anyway with Turkey deciding to flood them into Europe. The combat lines in Syria had been established for some time now, with millions of displaced people living inside or on the borders of Syria.

If the EU had wanted to defuse the situation, it could have jumped in to support refugee assistance inside Syria, Lebanon and Turkey, but what we got instead was the classic pass the buck. They could have helped at a far lower cost and stress on the real refugees themselves, excluding the young Syrian draft dodgers wanting to partake of Germany’s free grad school and welfare structure while their classmates fought to save their country.

Another responsibility that the EU has skated on, compliments of a compliant corporate media, is its support via NATO of the take down attempt on Syria, and its members involved in state-sponsored terrorism. They pretend not only that they don’t know, but that we don’t know they have done this.

One could not call this bad government, but rather the absence of it — anarchy by default — almost as if there were powers in the EU that wanted this destabilization to happen.

Merkel was the head cheerleader, and France, with a huge and hostile Muslim population has followed suit until it was struck with terror attacks itself.

But while the EU foreign policy has generally supported the terror war against Syria, particularly the arms shippers to the Persian Gulf states, it can hardly claim to be a victim. The disconnection from reality was highlighted yesterday when Hollande awarded Saudi Prince Nayef, France’s highest decoration for his  “efforts in the fight against terrorism and extremism.”

You just can’t make this stuff up, but apparently Hollande can, because he wants to remain competitive in arms exports to one of the main terrorism abettors in the region. Any EU claim to democracy, peace, or security is just a sham — a screen behind which the wheeler-dealers ply their nefarious trades.

Bottom line, it is a failure of leadership that is off the scale. One of the clues that the leadership is aware of this is their heavy investment in manufacturing straw-man external threats like Mr. Putin, when the world has had a front row seat for four months watching who has emerged as the real leader in the War on Terrorism… Jim W. Dean ]

Leaders of the European Union have gathered for an emergency summit in Brussels, where they are expected to declare a decision to seal the Balkans route used by many refugees to reach Europe.

According to an EU diplomat, the 28-member bloc’s leaders would use the summit to announce that they will “close the Balkans route in the coming days,” ending the “wave-through approach” to refugees trying to enter Europe.

Another diplomat, who spoke on condition of anonymity, confirmed that the draft declaration states that “irregular flows of refugees along the western Balkans route are coming to an end.”

The draft also says the bloc will “stand by Greece in this difficult moment and will do its utmost to help manage the situation.This is a collective EU responsibility requiring fast and efficient mobilization,” it reads.

The EU leaders are expected to ask Davutoglu to accept “large-scale” deportations of refugees from Greece, which is the main entry point to Europe.

The EU has reportedly offered Ankara three billion euros (USD 3.3 billion) in return for its attempts to stem the flow of refugees arriving in the continent via Turkey.

An estimated 13,000 people are currently living in temporary shelters designed to house only 2,000 or out in the open on the Greek-Macedonian border.

Back in October, the EU vowed to relocate 160,000 refugees, mainly from Greece and Italy, to other European countries. The plan, however, was met with strong opposition from some members, including Romania, the Czech Republic, Slovakia and Hungary.

According to a recent report by the European Commission bureau of statistics, Eurostat, some 1,255,600 refugees reached Europe in 2015, with more than a third of them having gone to Germany. People from Syria, Iraq and Afghanistan topped the Eurostat’s list of refugees.

Europe is facing an unprecedented influx of refugees, most of whom are fleeing conflict-ridden zones in Africa and the Middle East, particularly Syria. Many blame support by some Western countries for militants operating in the Middle East as the main reason behind the departure of refugees from their home countries.