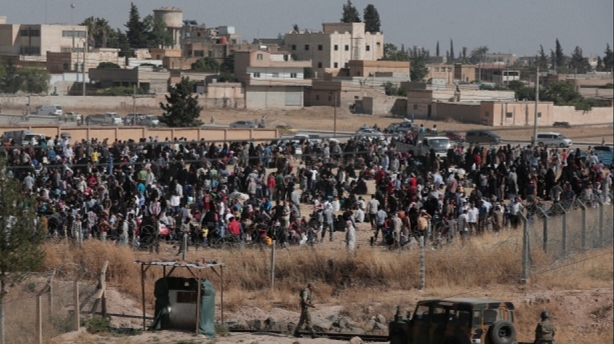 …by Paul Davis, for Rudaw, Erbil

[ Editor’s Note: This Paul Davis piece has some twists and turns in it, and it had us wondering whom he is working for. That news that Turkey has turned into NATO’s loose cannon was not an original story.

And while Davis can pile on Turkey for the latest crushing of opposition media, that’s a safe play, as even the EU did that yesterday in its big meeting with Turkey.

But the EU did not go so far as to pose that this flagrant violation of EU principles would necessarily nix Turkey’s chances of EU membership. Only France’s Hollande stepped forwardly to indirectly say that, and with a twist of the knife by reminding the press that Turkey would still have 72 provisions to fulfill prior to membership.

But the surprise came with Davis’, “A major supporter of terrorism is Iran”, just one step away from, “THE major supporter”. Dear Paul, might the Israelis be among your clients? How many countries has Iran taken over, set up governments, and then milked them dry? How may overseas military bases does Iran have to support its terror network, as opposed to the NATO countries?

Then we have “With a revanchist Russia on the rise”, a NeoCon term — uh-oh — and we have to put this into the planted-story folder. Nobody in the real world uses the word revanchist, as it is an egghead term. Revanchism (from French: revanche, “revenge”) is the political manifestation of the will to reverse territorial losses incurred by a country, often following a war or social movement, used since the 1870s.

Uh-oh…nailed again, Paul, a screened move to pitch Mr. Putin wanting to reconquer the former Soviet East European countries — a PR psyop dreamed up in defense think tanks — and in this case, without a shred of evidence, and no desire by anyone to even hallucinate such a thing. This as a NATO fanny-kissing ploy here. I have another French work for you sir, “provocateur”.

The world vote is in Paul, Putin and Lavrov are the two most respected statesmen on the planet, and not because they want to retake Eastern Europe. No one believes that, but some pretend to.

And when it comes to the top counter terrorism award, those pesky Russian get that, too. So I guess that makes them even more dangerous, or is it because they are not supporting ISIL on the side, like the US does?

As for Turkey not helping NATO, Paul, it has destabilizers up in Ukraine now working with the Right Sector thugs with another psyop about preparing to retake Crimea. We all know that Kiev will rekindle the war in its dying gasp politically, as it drowns in its own corruption, but it will not put a dent in Crimea.

Nice try Paul — we are are followers of Thomas Jefferson. We are capable of reading what you are really saying… Jim W. Dean ]

The Turkish government took over the Zaman newspaper, a paper that has been critical of President Erdogan’s government. This is not the first time Erdogan has attacked the press and otherwise cracked down on voices that have opposed him.

Turkey is a NATO member and must be held accountable by the rest of NATO for its actions. While NATO is primarily designed to act as a joint military force in the common defense of its member states, it also has the obligation to protect the basic principles of democracy that are being defended.

One of the basic tenants of any democracy is freedom of the press. As an American founding farther, Thomas Jefferson, said:

“The basis of our governments being the opinion of the people, the very first object should be to keep that right; and were it left to me to decide whether we should have a government without newspapers or newspapers without a government, I should not hesitate a moment to prefer the latter. But I should mean that every man should receive those papers and be capable of reading them.”

Has the time now come for NATO to reexamine its relationship with Turkey and decide if it is in the best interest of NATO for Turkey to remain a member.

There was a time that it made sense for Turkey to be a part of this alliance, when during the cold war it was the southern anchor and the only NATO country with a common border to the Soviet Union. This was also a time when the Turkish government was run by secularist. This did not mean that Turkey was a democracy in the western tradition but it was somewhat unique in the region and could talk to the west.

Today however we see an implosion of both secular and democratic principles in Turkey. Beyond the freedom of press issue is the move by Turkeys ruling AK party to work with terrorist organizations such as ISIS and to go to war with a section of its own population, the Kurds. This last is most disturbing since it violates international law, most notable the probation on genocide. Let us make no mistake the attacks on the Kurds are nothing less than an attempt to wipe away a culture that is deemed inferior.

There is very little likelihood that NATO will make any move to remove Turkey. With a revanchist Russia on the rise and a confused situation in the Middle East the west is paralyzed into inaction. The main threat to the region is perceived to be ISIS and the Turks are allowing the US to use Turkish airfields to launched attacks while at the same time supplying ISIS with arms and equipment. Turkish reporters have been sentenced to death for revealing this last.

A major supporter of terrorism is Iran, and Turkey’s Prime Minister Ahmet Davutoglu met in Tehran with Iranian President Hassan Rouhani to discuss common interest and goals between the two countries as well as increase trade. With the recent deal between Iran and the west Turkey is hoping to triple it trade with Iran. An ally of Russia in the Syrian civil war Iran building a better relationship with Turkey can only be seen as counterproductive to NATO interest, yet NATO countries are also using the new agreement to increase trade with Iran so can do nothing to Turkey.

The Syrian Kurds under the PYD and its armed wing, the YPG, have been the strongest allies the west has in fighting ISIS in Syria. Turkey has attacked YPG positions in Syria calling them terrorist and part of the PKK. Instead of increasing support to the Kurds the US recently warned them not to support the PKK in Turkey even through there is no evidence this has happened.

Inside of Turkey the Kurds have made great strides politically and have won at the ballot box. The AKP response was a new election to dilute the number of seats won and now have begun the process of removing Kurdish MPs. NATO has to see this for what it is, dictatorship.

With its military engaged killing its own citizens it is in no position to help NATO militarily should the need arise. With it actions against the press and its move to have a rubber stamp Parliament it is in no way a democratic country on par with the other member states. It long ago lost the Kemalist principle of its founding and its time it lost its place in NATO.

Paul Davis is a retired US Army military intelligence and former Soviet analyst. He is a consultant to the American intelligence community specializing in the Middle East with a concentration on Kurdish affairs. Currently he is the President of the consulting firm JANUS Think in Washington D.C.