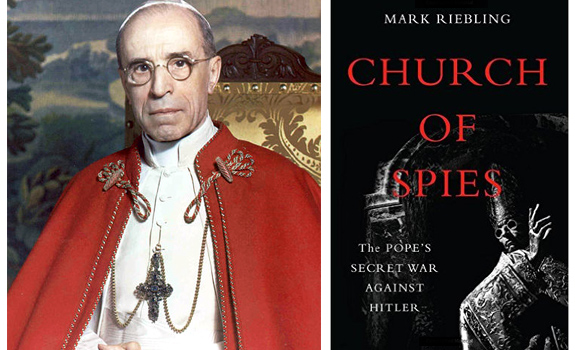 by Jim W. Dean, VT Editor,  … with the Atlanta Chapter of the Association for Intelligence Officers

Atlanta is AFIO’s newest chapter, started last fall by a core group of Harvard alumni with intelligence-related backgrounds and careers, featuring author Mark Riebling and his Church of Spies: The Pope’s Secret War against Hitler, a 20-year research project that also required some very patient publishers. The movie rights have already been purchased, so the film version will be in the pipeline.

AFIO has expanded its numbers by promoting membership past the confines of card carrying members of the US intelligence community. And let me add right away, the movie version of what Intel people are like covers just a small part of this large and diverse community. The analysis, technical and logistics parts alone are immense.

The chapter program goals are to present the diversity of this community on a face-to-face basis through its guest speaker regular meetings, but also the networking and camaraderie synergies so often found among people with shared interests and passions.

The leadership of the Atlanta chapter, headed by attorney Brian Hooper got off to a quick start for building the chapter in concert with his Harvard Alumni Club in Atlanta, and then expanding it to several more alumni clubs.

The meeting space, cocktail hour and finger food was graciously provided by Mr. Hooper and his law firm, Womble Carlyle in the Skyline Room with its sunset views of downtown Atlanta.

The moderator was Professor Nathan A. Sales, a leading light among legal scholars focused on emerging national security issues, who teaches at Syracuse University College of Law. He teaches and writes in the fields of national security law, counter terrorism law, administrative law, constitutional law and criminal law.

Although I have some video clips, audio of talks is always a challenge to catch on the fly, so I found a recent YouTube.

This was our best meeting so far in attendance and mix of people. A special bonus is bumping into people you have not seen or heard much of in a number of years, while meeting some new ones. You can click on the AFIO link to the main website to see if there is a chapter in your area.

VT is an AFIO chapter of sorts, not affiliated with the Washington headquarters, but with our own worldwide network where many people have never met in person. Virtual relationships have been replacing traditional ones, which is why I always try to maintain a balance between the keyboard and press the flesh varieties.

During the 1970s the Intelligence Community was buffeted by a number of leaks and revelations, culminating in the Church and Pike Congressional investigations. CIA officer David Atlee Phillips took early retirement in 1975 to respond to the growing sentiment that the CIA was a “rogue elephant.”

As part of this effort, Phillips founded this organization, known then as the Association of Retired Intelligence Officers (ARIO).

Although much attacked at the time when many people called for the dismantlement of the CIA, Phillips toured the world to speak out in favor of the need for a strong intelligence community. He was subsequently personally accused of being a participant in the Kennedy and Letelier assassinations.

He successfully sued several publications for libel, retractions were issued and monetary damages awarded. Phillips donated some of these proceeds to ARIO for the purpose of creating a legal defense fund for American intelligence officers who felt they were the victims of libel.

This defense focus was later moved to a separate group called Charter, which disbanded in the early 1980s, and AFIO’s focus narrowed to public education within its 501(c)3 charter.

The first ARIO convention was held in September 1975, and the organization defined its purpose to explain to the nation the function of intelligence and what intelligence officers can and cannot do. From the very beginning it sought to reach out to teachers and students across the country as well as to the media, through publications, such as Periscope and through periodic luncheons.

These early efforts have grown into the robust academic outreach and support programs present today, including scholarships, civic outreach, a variety of print and online publications and media fora, an annual symposium as well as the quarterly luncheons featuring senior officials from the Intelligence and Policy Communities, authors and media representatives.

In 1978 the name of the organization was changed to Association of Former Intelligence Officers to reflect a pool of members who were not necessarily retired, which widened the pool of eligible members and reflects the current dynamic membership. From its inception in Dave Phillips’ living room and a few hundred members in 1975, AFIO has grown to over 5000 members, with 24 active chapters across the United States.

Our mission is to build a public constituency for a sound, healthy and capable U.S. intelligence system. Our focus on education fosters an understanding of the important role of intelligence in National Security and nurtures interest by students in careers in the many fields used by U.S. Intelligence Agencies. This includes the role of supporting intelligence activities in U.S. policy, diplomacy, strategy, security and defense.

In addition, AFIO focuses on understanding the critical need for effective counterintelligence and security against foreign, political, technological or economic espionage, as well as covert, clandestine and overt counter-terrorist or criminal operations threatening US security, the national infrastructure or corporate and individual safety. AFIO’s mission has special significance in today’s international diplomatic and business environments.