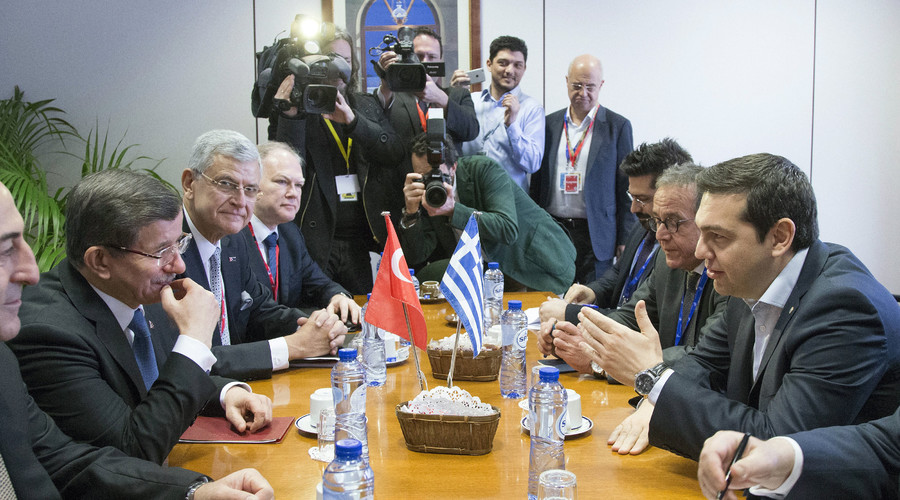 [ Editor’s Note: It did not take long for the EU Parliament to come to the support of VT’s editorial position on how Turkey not only swindled the EU leadership out of billions more refugee funds to loot for Erdogan’s political cronies, but the planned deal also gave him an underground railroad to dump the opposition poor into the EU with the accelerated visa program to start in June.

Not a soul in corporate media asked the obvious question of what is going to happen when Turkey’s ISIL and al-Nusra terror proxies are pushed out of Syria back into Turkey. Our mothers once taught us that “Idle hands are the devil’s playthings”.

With the high quality fake passports that Turkey leads the world in, these ISIL people will be able to flow into the EU on the express lane after the suitable training as the sultan’s new Gladio force.

The center-right ALDE, the European People’s Party (the largest group), and the Socialist party leader were all able to quickly read the tea leaves on what a threat this is to Europe. I don’t know what the European Parliament can do quickly to stop or hold this disaster up, but we will be trying to get in touch with them to swap some briefings.

The payback on the EU for Turkey getting beaten in Syria will last decades, and this current incompetent EU leadership will have been a primary cause. We will be watching to see what the various member security chiefs have to say about their slow motion train wreck… Jim W. Dean ]

The Alliance of Liberals and Democrats for Europe (ALDE) Group slammed Wednesday a deal between Turkey and the European Union to ease the refugee crisis, saying such an agreement may give “Sultan Erdogan” the keys to Europe.

Guy Verhofstadt, who is the ALDE Party leader, said in an address to Members of the European Parliament (MEPs) in Strasbourg, France, that the move is “hugely problematic.”

“It is a deal with Turkey in which we outsource our problems; a deal in which we are giving in fact the entrance keys, the keys to the gates of Europe, in the hands of Turkey, of the successors of the Ottoman Empire, to Erdogan, I should even say maybe to Sultan Erdogan,” Verhofstadt said, referring to Turkish President Recep Tayyip Erdogan.

Meanwhile, Manfred Weber, the leader of the biggest group in the European Parliament, the center-right European People’s Party, said the EU should not give a “blank cheque” to Turkey.

Socialist leader Gianni Pittella also noted that discussions on stemming the flow of refugees to Europe “must not be mixed” with talks on Turkey’s EU membership process.

Eleftherios Synadinos, an MEP from Greece’s far-right Golden Dawn Party, was expelled from the European Parliament for insulting Turkish people during the Wednesday debate.

On March 7, the Turkish government proposed to take back all those refugees who cross into Europe from its soil in return for more money, faster EU membership talks and quicker visa-free travel. European Union leaders also welcomed the initiative.

Critics, however, have accused Turkey of blackmailing Europe into letting it join the EU. EU leaders are expected to try to finalize the refugee deal with Ankara during a summit at the EU headquarters in Brussels, Belgium, on March 17-18.

Europe is facing an unprecedented influx of refugees, most of whom are fleeing conflict zones in Africa and the Middle East, particularly Syria.