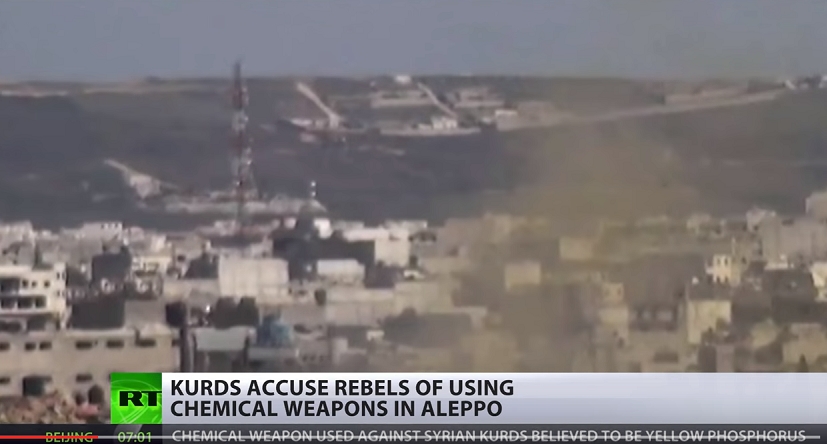 In an interview with RT, a spokesman for the Kurdish YPG militia accused Turkey of providing a clear transit route for the chemical weapons that were deployed against them near the city of Aleppo on Tuesday.

Syrian anti-government militants “took advantage of the ceasefire” to launch attacks against a Kurdish-controlled area near Aleppo in northern Syria, Redur Xelil told RT. The attackers targeted a civilian district of what was once Syria’s biggest city, and has since become a key battleground. According to Xelil, the shells emitted an “unnatural smell” and “yellow smoke” upon impact, indicating that chemical weapons were involved.

“Our sources inside the rebel groups have confirmed that toxic substances were used. We also have verified information that sarin gas was delivered to them from Turkey. All signs point to the fact that these factions were using banned weapons, but we cannot access the launching area, as it is located on the front between the Turkish and rebel forces,” Xelil told RT by Skype from Rojava in Syria.

Kurdish deputies in the Turkish parliament have previously accused Ankara of supplying Islamic State (IS, formerly ISIS/ISIL) and other jihadist groups inside Syria with chemical weapons, which are used both in their fight against the Syrian government and to pin responsibility for their deployment on the regime of President Bashar Assad.

Tuesday’s attack, which also involved phosphorus, did not result in any severe casualties.

“This attack was a failure, but this doesn’t mean that there won’t be another one. We are convinced the enemy has improvised shells containing phosphorus and sarin gas,” said Xelil.

Last month, the Organization for the Prohibition of Chemical Weapons (OPCW) accused IS of using chemical weapons against Kurdish forces throughout 2015. Reports emerged on Wednesday revealing that the jihadist group had launched a new chemical attack on the Kurdish village of Zaza in northern Iraq, in which more than 40 civilians suffered chemical burns and lung damage.

The Kurdish People’s Protection Units said they came under a chemical weapons attack on Tuesday, allegedly launched by several Islamist opposition groups in the city of Aleppo. The YPG released unverified footage showing what is believed to be cloud of yellow phosphorous. Kurdish forces didn’t mention ISIS or Al-Nusra among those armed radical groups.

RT: Assuming the claim from the YPG is true, who do you think may have been behind this chemical weapons attack?

RT: Back in the summer of 2014 the last chemical weapons were supposedly shipped out of Syria for destruction. How are extremist groups able to get hold of them?

CR: This is the Syrian government that destroyed its own weapons. If you go back to 2013 the US government was blaming Assad for having used sarin on his own people. Even though James Clapper and John Brennan, the then CIA director, have now admitted – three years later – that ISIS has access to chemical weapons, they have never really explained that possibly even back in 2013 it was the terrorist groups that staged that attack of sarin in order to get the US to enter into the fray in Syria. This is something that should be investigated internationally; human rights groups and the UN should be investigating right now. It is a good thing there is a ceasefire, and it is a bad thing that some elements want to stop that ceasefire and get back to having war.

RT: Islamic State (IS, formerly ISIS/ISIL) was not specifically mentioned but ISIS has been accused of using chemical weapons in the past. Are they becoming increasingly widespread among extremist groups?

CR: It sure seems that way. There has been information that you’re able to get precursor chemicals through Turkey. This goes back a couple of years and it came from different sources. It looks like, yes, many groups have access to chemical weapons. Now, the Syrian government apparently does not have access because they did destroy their weapons. But these groups that are not covered by the ceasefire seem to want to break up the ceasefire.

RT: What impact could this have on the peace process?

CR: Let’s hope that the cooler heads: the US, Russia, Iran – some of these other countries that have interest now in Syria – will not let these attacks end the efforts at peace negotiation. That is the reason for them. They are trying to not have any kind of peace process. But these other groups that are not covered by the ceasefire probably are trying to disrupt it. We have to hope that the diplomats will understand that and will say: “We’re going forward nonetheless,” and that there can be some investigation to find out who exactly was responsible.