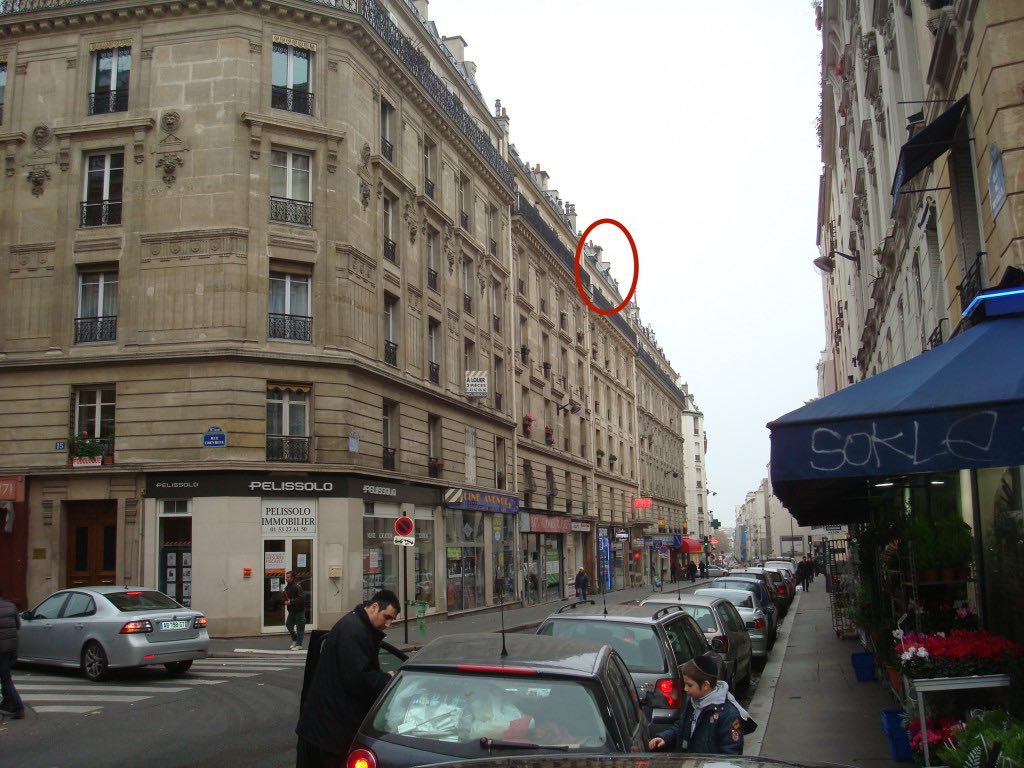 SCOOP! A photograph of the Comptoire Voltaire bar was published on Twitter least half an hour before the arrival of the “kamikaze” Brahim Abdeslam. Panamza has identified the exact place from which this disturbing image was taken.

The authorities, and virtually all of the French media, are maintaining a bizarre silence on the subject.

The November 17th (edition 3470) Paris Match was devoted to the attacks that occurred four days earlier in Paris.

A page of the magazine includes this revelation: On the evening Friday, November 13th, at 21:16 precisely, someone posted on Twitter a  photograph  of the Comptoir Voltaire bar, seen from above. Twenty minutes later, an explosion occurred in the bar. According to the official version, the “jihadist” Abdeslam Brahim, also alleged to have been one of the shooters, blew himself up.

His profile image featured the portrait of the Jordanian Abu Musab al-Zarqawi, the opaque face of jihadism in the mid-2000s.

Paris Match, whose shocking information was picked up on by NONE of the traditional media, merely indicated that the building was located in the “eleventh arrondissement” of Paris.

Panamza visited the scene in order to identify the exact location from which the photograph was taken.

It turned out to be the balcony of one of the two apartments (located under the roof) of the 7th floor of the Haussmann building at 68 rue de Montreuil – not far from the Place de la Nation.

Panamza was unable to gain direct access to the tenant or owner of the apartment.

Here are views from several angles, taken by Panamza of the site occupied by someone with advance knowledge of the explosion at the Comptoir Voltaire.

This information, revealed initially by Paris Match and in more detail by Panamza today, has never been mentioned by the authorities. Neither Bernard Cazeneuve, Minister of the Interior, nor François Molins, public prosecutor of Paris, have ever made the slightest allusion to it

Officially, the November 13th terror suspects and their accomplices never stayed overnight or lodged in Paris.

68, rue de Montreuil, close to a neighborhood emblematic of the Jewish community? No.

Note this detail: A mysterious couple suspected of being linked to terrorists, was present that night, very near the rue de Montreuil.

According to Le Parisien, they were questioned by police before being released. The reason: the laptop belonging to “Miss C” (who was herself involved in a relationship with an acquaintance of Jawad Bendaoud, the landlord at Saint-Denis) repeatedly signaled locations near the scenes of the attacks. When questioned, the pair – the wife had come from Belgium – claimed to have come for a meeting at Nation before moving down Avenue Philip Augustus, two locations extremely close to the Comptoir Voltaire bar.

Le Parisien, aligning itself with the police version, says the couple met at Nation because it was a “trendy” spot. But anyone who knows eastern Paris knows that Nation is hardly a favorite place to party, unlike the neighboring areas Bastille and Oberkampf.

Important point: the co-authors of the problematic Parisien article are Eric Pelletier and Stéphane Sellami. The latter regularly publishes articles on Franco-Israeli affairs (keeping well informed from the Embassy of Israel), while the former has already been mentioned by Panamza because of his involvement in setting in stone the official version of the Merah case. (Editor’s note: The 2012 attacks attributed to “radical Muslim” Mohammed Merah are exposed as false flags in a brilliant essay by French historian Laurent Guyénot published in We Are NOT Charlie Hebdo: Free Thinkers Question the French 9/11.)

With Jean-Marie Pontaut (who owes his formation to pro-Israel journalist Jacques Derogy), Éric Pelletier published only three months after the Merah-attributed shootings at Toulouse and Montauban, an “investigation” that Claude Gueant, the former interior minister then responsible for the case, would have been able to sign.

We now understand why all the so-called investigative journalists have silently avoided following this trail: From a Parisian balcony, someone –utilising a “jihadist” Twitter account – took and published a photograph of a place where, less than half an hour later, an explosion was blamed on a “kamikaze.”

Intellectual laziness or code of silence?

The case bears a resemblance to September 11th: at the time, the French media – influenced by the shady Guillaume Dasquié  –  had suggested that Israeli spies spotted around the homes of the future alleged hijackers were merely on a vague surveillance mission. Yet on the morning of the attacks on the World Trade Center and the Pentagon, it was indeed three Israelis linked to the Mossad, who betrayed their foreknowledge of the event by situating themselves – in advance – to film the arrival of the first aircraft.