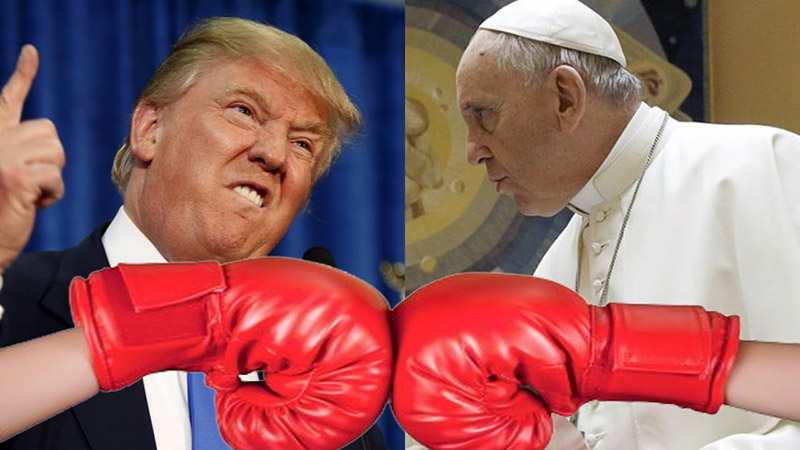 Recently the Pope and Donald Trump had an altercation because the Pope accused Trump of not being a “Christian” because Trump wants to put up a security wall along the Mexican border and evict illegal immigrants.

As I have stated in a previous article, my view on this issue is that any country, no matter what their religion may or may not be, that is in trillions of debt, that has a high unemployment rate and people who are homeless, needs to take care of their own and stabilize their own economies first before letting yet more people into the country, who instead of being job creators are job seekers and often rely on social security checks in order to survive.

While thousands of Americans are unemployed and struggling to survive, thousands from South America have entered the country and joined the illegal job market.

Let’s face it, the US economy is not what it once was and the middle class is depleting by the day. Small business development has been gobbled up by monopolies and students deep in debt with high qualifications end up working in the service industry with every penny that  they earn going towards many years of repayment schemes. Thousands more arriving across the border is not going to solve this problem.

This then is the crux of the disagreement between the Pope and Trump with the added accusation of Trump not being “Christian” enough.

Reverse speech has been around for many years and has an uncanny way of exposing what people really think, who they really are and if what they say is the same as what they are thinking.

Often what comes out in forward speech is in direct contrast to their real intentions and motivations. Which can be an eye opener for many who believe the spin only to discover that the reality is far from what they were led to believe.

David John Oats is a reverse speech specialist who has been around for years. His work throughout the years has proved to be uncannily accurate especially with regard to the US Presidential elections.  He often reveals the type of candidate that you are really voting for as opposed to the candidate that you think you are getting. The blurb from his web site is as follows:

It first began for him on his 28th birthday in 1983 when he accidentally dropped a tape player in a toilet bowl and as a result it only played backwards. He started listening to tapes backwards and by 1987 he had written his first book on reverse speech, co authored with his mate, Greg Albrecht.

Since that time David has written 4 more books on Reverse Speech and designed and authored the 3 Reverse Speech training courses. He has lectured around the world to crowds of 1000’s and has conducted 1000’s of media interviews, including CNN’s the Larry King show.

Jeff Rense recently did an interview with David who has done reverse speech analysis on Pope Francis and Donald Trump.

If anything can clear up who is a “Christian” between these two is and who is not, reverse speech has the answers. An apt interview if ever there was one taking the recent controversy between these two gentleman into account.

Here is the Interview. However, listen to it at your own discretion, the revelations are shocking and this should certainly not be shared with anyone under the age of 18.

The reverse speech of both separates the wheat from the chaff and clearly exposes who is a “Christian” and who is not. Whether you believe it or not, David’s track record over the years is a good testimony as to his accuracy.