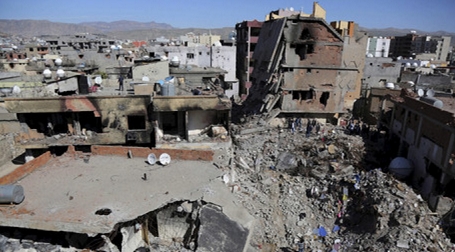 Evidence is piling up that many of the oil fields seized by ISIS along with oil production facilities, we are speaking of the oil Russia has cited as being shipped into Turkey by a fleet of 12,000 trucks, slowly being decimated by Russian Aerospace forces, really aren’t “ISIS” at all. They were part of the June 4th, 2014 deal between Barzani and Erdogan, signed in Ankara, to truck millions of tons of looted oil out of Iraq.

Moreover, claims that the Baku/Kirkuk/Ceyhan pipeline has been “out of action” for years now appears to be a fabrication and that it is pumping stolen oil 24 hours a day.  Instead it seems the pipeline explosion was staged to allow mass deliveries to Israel, directly from the Mediterranean while the Turkish Army (outlined below) is providing cover for the $700m per week theft through ethnic cleansing and genocide.

We are finding that the Kurdish Regional Government, working openly with Turkey since June of 2014, has seized Iraqi oil fields and has stolen up to $200 billion in oil in what Baghdad claims is a global crime syndicate and not really “ISIS” at all.

“The Iraqi Oil Ministry announced that the Kurdish Regional Government had “deflected” $6,288,000,000 to unknown sources, revenues from oil sold by Kurdistan through Turkey, funds owed to Baghdad that have since disappeared.

By the end of 2014, the total of missing oil revenue, withheld and missing is expected to reach $8.4 billion.  The ministry made the following statement:

‘non-disclosure of the region for oil activity and refusing to deliver revenue to the federal treasury over the past years (2010, 2011, 2012 and 2013), though the region had got its full share of the federal budget by 17%, led to losses of more than $ 119 billion dollars.  The KRG has refused to tell Baghdad where the missing money is.

We believe that the Turkish government has been moving this oil to the port of Ceyhan through what they claim is a destroyed oil pipeline and selling it on the open market with the aid of the State of Israel.’

KRG strongman, Nechirvan Barzani stated, last week, that he had signed a fifty year agreement with Turkey in order to illegally sell Iraqi crude to Turkey in violation of the constitution that prohibits the sale of oil by any organization other than the Iraqi Oil Marketing Company (SOMO).  Under the constitution, the KRG is prohibited from any sales of oil.

The Iraqi government and SOMO have issued a statement that all companies and individuals or institutions that buy Iraqi crude.

Nechirvan Barzani, the head of the Kurdistan Regional Government stressed (in June 4, 2014) that the Kurdistan region signed an agreement with Turkey for cooperation in the field of energy, noting that this agreement will last for fifty years and it is extendable.

Nechirvan Barzani had been hosted by the Parliament of the Kurdistan region to illustrate the process of exporting oil from the region. The Iraqi government stresses that the Iraqi Oil Marketing Company (SOMO) is the only one authorized to sell the crude produced by the country, including the oil of Kurdistan.

The government cited the vessel, The United Adrchib, loaded at Ceyhan, Turkey and headed to the US, is one such instance of oil piracy between Turkey, Israel and the KRG.  The vessel has since changed course and, at the direction of the KRG, is looking for a buyer.”

An investigation by Veterans Today is beginning to unravel a mystery in Iraq.  You see, yesterday Turkey “lent” the Erbil government of the Kurdish region of Iraq $200m for oil it says “got lost” due to a pipeline explosion.  The money is an outright gift but is it?
We know this…80% of the oil ISIS is said to have delivered to Turkey was transported through Pergmersha lines.  We wondered how ISIS did this. Now the story gets bolder, more outlined for sure.
Yesterday, the Barzani Kurds in Erbil, though part of Iraq, aligned with Turkey against Iraq, though supposedly against ISIS, just as much “in bed” with ISIS as Turkey is, receiving $200m for selling oil rights that it claims it has “assumed” based on ISIS taking control of oil fields from the Baghdad government.
Yes, you have it, Erbil and the Pergmersha consider the oil fields ISIS and Baghdad are fighting over theirs even though they are outside the borders of the Kurdish Regional Governments control. Here is what sources are telling us, and this has flabbergasted everyone who has touched this information:
The Kirkuk oil fields and regional refineries seized by ISIS were actually seized by Kurds working with ISIS and the oil from these oil fields was sold to Turkey, not by ISIS but by Erbil and the $200m that Turkey “lent” the Barzani government was actually a payment for oil the world has been told was stolen by ISIS.  It was really stolen by the Barzani Caliphate which is actually part of ISIS, according to our sources.
Turkey’s press crackdown and its closure of the Kurdish regions is allowing Ankara and Erbil to bypass the phony ISIS truck convoy ploy and go full steam, piping stolen oil directly to the Mediterranean.
When VT cited ISIS as a global criminal conspiracy of nation states at the Damascus Security Conference in December 2014, this “smoking gun” had passed unnoticed with only VT aware of the game.
RT: An RT crew has visited Diyarbakır, the unofficial capital of the Turkish Kurds, to throw light on the gruesome consequences of Turkey’s crackdown on the Kurdish population. RT’s William Whiteman talked to the relatives of one of the victims.

RT took an exclusive look into the mass killings of civilians allegedly committed by the Turkish military, filming the mourning of those who lost their loved ones as a result of the ongoing crackdown.

This is a crackdown on civilian population, not PKK’: Kurdish politician on Ankara’s south-east op

Friday prayers in Diyarbakir have also become a manifestation of the deep divide between the locals and the Turkish government.

In a further effort to quash Kurdish descent, Turkish authorities now require imams to read government-approved sermons. Thousands of local Kurds are protesting this move by boycotting the city’s main mosque and holding prayers in a nearby park.

The imam speaks in both Kurdish and Turkish, condemning the government’s actions.

RT’s William Whiteman witnessed Turkish military helicopters flying overhead in Diyarbakir, while the explosions and gunfire of the continuing military operation could be heard.

In the city’s Sur district, Turkish security services have continuously waged a military operation against the Kurdistan Workers’ Party (PKK) and its affiliated groups, as part of the ongoing government operation across the region.

Whiteman spoke to the weeping mother of 17-year-old girl Rozerin Cukur. She was killed in a military bombardment of Sur while she was visiting the district with friends in early January. With access to the area now cut off by the fighting, her body has never been recovered. Sadly, she is one of many such cases.

Rozerin’s father, Mustafa, could be found at a nearby memorial for the missing dead.

“We saw the news of her death reported on state TV and the internet. The reports included Rozerin’s ID information, discovered beside her body,” the father told RT.

Through hunger striking, the families here have managed to pressure the government into returning just two of the missing bodies. But the condition they were in was appalling.

“Of the bodies that have been recovered, parts of their flesh and internal organs had been eaten by a stray dog,” Mustafa said. “The bodies were riddled with thousands of bullet holes. It seems that the military continued to shoot them long after they were dead.”

“They were only identifiable through DNA testing,” Mustafa claimed.

RT spoke to the co-presidents of the local Kurdish People’s Democratic Party (HDP) branch about the plight of these families.

“Of the local residents killed in Sur, 14 bodies are yet to be recovered. They have been lying in the open for a long time, first under the siege, and now under the curfew,” Ömer Önen, co-president of HDP office of Diyarbakir, told RT. “Without the bodies, the families have been unable to hold funerals.”

Önen explained that by denying the people in Diyarbakir the right to give their loved ones a traditional Islamic burial, the Turkish government is violating human rights and the sanctity of religious traditions.

Every Saturday in Diyarbakir, the families of people who disappeared during the peak of the Turkish-Kurdish conflict in the 1980s and ‘90s gather to demand information on their missing loved ones. Now they are being joined by the families of new victims, with Rozerin’s parents among them.

Previously RT showed exclusive footage from the city of Cizre, destroyed by Turkish government forces during an anti-Kurdish military operation that ended there only two days ago.

The Turkish government offensive on the mostly Kurdish southeastern regions of the country was launched back in July of 2015 with strict 24-hour curfews imposed on several Kurdish towns.

On Friday RT requested comments on the ongoing anti-Kurdish crackdown in Turkey from aid groups and rights organizations, such as HRW, MSF International, the ICRC, the OHCHR, and Amnesty International. There has been no answer so far.

In the meantime, Turkey has claimed it will continue its operations against Kurdish militia – to ensure peace in the region.

“We will continue our operations to eliminate the PKK. This is necessary to ensure peace in the region,” said Efkan Ala, the Turkish interior minister.

Washington says Ankara has the right to fight terrorists, but only within international law.

“While we have certainly acknowledged Turkey’s right to defend itself against terrorists, and the PKK is a terrorist organization that we have recognized [as such], we have also, and I’ve said it many times from this podium, called on [Turkey] to do so in accordance with the international law and obligations that they [Turkey] have,” US State Department spokesman John Kirby said.