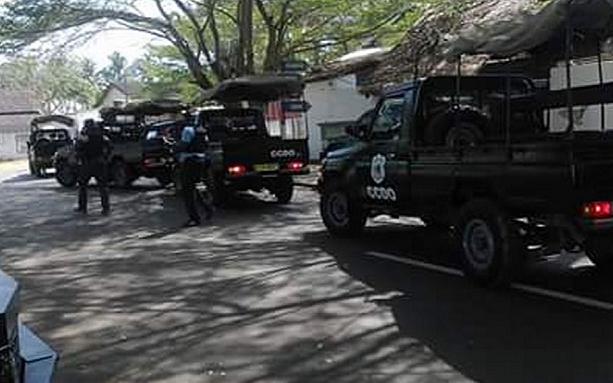 Police at the incident in Grand Bassam Photo: @michaelh992

At least 11 people including a five-year-old child have been killed after four gunmen attacked two hotel in the Ivory Coast resort of Grand Bassam, according to witnesses and local media.

The assailants, who were “heavily armed and wearing balaclavas, fired at guests at the L’Etoile du Sud (Southern Star), a large hotel which was full of expats in the current heatwave”, a witness told AFP.

According to reports, hostages have been taken as special forces opened fire on the gunmen using Kalashnikovs in Grand Bassam.

Some reports suggested as many as 15 people had been killed including five Ivorians and five women whose nationality is unknown. A US delegation was in the area on Sunday but a US official told a Radio France Internationale reporter that they did not believe it was the target.

Witnesses claimed the attackers shouted “Allahu Akbar” during the gunfire. The beach nearby has been evacuated and French forces are believed to also be at the scene.

Sekongo, who lives across from one of the town’s many beachfront hotels, said she ran outside when she heard the gunfire and saw people running away from the beach. She said residents were hiding in their homes as security forces responded.

Another witness said there had been casualties, without being able to say how many.

“The shots took us by surprise and now we are staying holed up,” the witness said.

It was not immediately known how many had been injured or who was behind the shooting in the former French colonial capital, around 25 miles east of the commercial hub Abidjan.

A crowd of several hundred people had gathered at the entrance to Grand-Bassam’s French quarter at the edge of the old town, where a dozen ambulances were on standby.

An AFP journalist saw around a dozen people, including an injured Western woman, being evacuated in a military truck.

Military vehicles carrying heavy machine guns were also heading to the scene, along with armed traditional hunters known as Dozo.