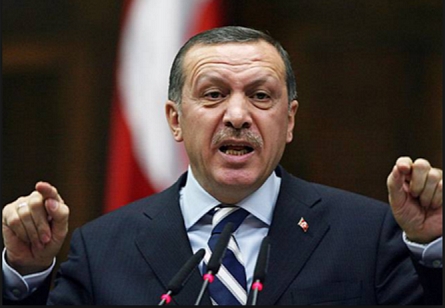 Turkey’s leader inhabits the world’s largest residential palace with 1,000 rooms and a floor area four times the size of Versailles. He delights in issuing instructions to his people, notably by telling Turkish women to ensure they produce at least three babies each. He calls Benjamin Netanyahu a “murderer” and Bashar al-Assad a “merciless killer”.

But woe betide any Turk who dares insult His Excellency President Recep Tayyip Erdoğan. And by the way, in theory at least, he also wants to join the European Union.
Mr Erdogan is now trying to subdue every possible challenge to his rule. Troublesome journalists go straight to jail where they are joined by ordinary Turks found guilty of “insulting” their leader, in breach of the notorious Article 299 of the Penal Code.

After 14 years of dominance in Turkey, Mr Erdoğan has become one of the most quixotic and accomplished politicians of all. The question which divides his country is whether he is also dangerous.

Here in his home city of Istanbul, which he served as mayor in the Nineties, there are plenty of devout supporters of the president. Devout is the right word, for Mr Erdoğan embraces the religious faithful, the poor and the lower middle class. One Istanbul commentator – no friend of the president – acknowledges the personal charisma of a ruthless but intensely emotional man, who wept in public during his mother’s funeral.

Yet Mr Erdoğan’s behaviour rings more and more alarm bells. After his Justice and Development (AK) party won power in 2002, he broke the army’s grip on politics – and Turkey’s secular modernisers cheered him on.

But Mr Erdoğan is now trying to subdue every possible challenge to his rule.Troublesome journalists go straight to jail where they are joined by ordinary Turks found guilty of “insulting” their leader, in breach of the notorious Article 299 of the Penal Code.

These days, Mr Erdoğan denounces Vladimir Putin at every opportunity. But he has borrowed from the Russian’s political playbook by jumping from the prime ministership to the presidency in order to prolong his dominance.

Now Mr Erdoğan wants to complete this manoeuvre by rewriting the constitution to create an imperial presidency, tailor-made for his own ambitions. As for how long he aims to rule, he talks of being “ready for 2023” – the centenary of the republic’s birth.

So Turkey has an instinctively authoritarian leader who treats the constitution as a personal plaything and plans for decades of dominance. How can this not be dangerous?

¶Terrorists strike in Istanbul from time to time – witness the suicide bombing outside Hagia Sophia in January – but visitors to this heaving metropolis find it easy to forget that one corner of Turkey is already engulfed in conflict. The old war between the Turkish state and Kurdish guerrillas has flared back to life with terrible consequences. A 28-year-old Kurdish journalist, Vildan Atmaca, told me what happened when she tried to reach the scene of a gun battle in the eastern province of Van.

“We tried to go there, but the security forces blocked us,” she said. “So we went to the hospital to speak to people who had been wounded. But the police chased us away from the hospital. Half an hour later, the police came to our office to arrest a reporter for writing ‘false news’. Then I was detained for ‘resisting arrest’.”

For the next six weeks, Ms Atmaca was behind bars in Van. She was not physically assaulted, but she had to endure constant verbal abuse from her guards – often of a sexual nature. Then she was freed on bail, pending trial for allegedly “spreading terrorist propaganda”. Speaking over the phone from a town in the epicentre of the conflict, Ms Atmaca told me: “There is no law, no justice and no democracy in Turkey.”

¶Along the natural avenue carved between Europe and Asia by the mighty Bosphorus, a Russian frigate steamed towards the Black Sea. Istanbul straddles one of the great junctions of the world, controlling a vital artery for Russian shipping, both civilian and military.

Mr Putin and Mr Erdoğan have exchanged harsh words and economic counter-measures since Turkey destroyed a Russian jet last November. But the warships that Mr Putin sends to join his Syria campaign must pass under Mr Erdoğan’s metaphorical nose in Istanbul.

So far, he has done nothing to obstruct them: that would be too inflammatory even for him. Given that Mr Erdoğan intends to wield power into the indefinite future, however, who knows what he might have in store?