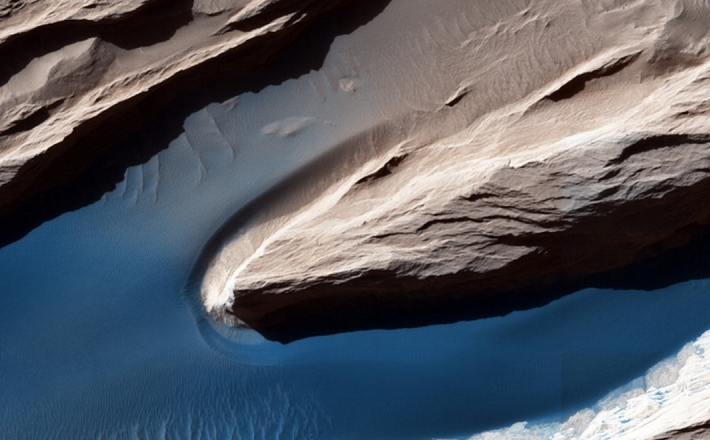 Fitted with one of the largest and most powerful cameras ever sent into space, the MRO has sent back 264 terabits of data, including an incredible 216,000 images of Mars’ alien surface.

It has captured pictures of everything from Martian avalanches to violent ‘dust devil’ storms and bizarre rock formations.

Celebrating one of the longest continuous studies of the freezing and barren planet, NASA has compiled a neat two-and-a-half minute video, summarizing the orbiter’s achievements.

They include discovering evidence of ‘yardangs’ – rock shapes formed by wind erosion – as well as extreme close-up images of the Gale Crater.

The strangely textured crater, 154km in diameter, is the result of a meteor crashing into the planet about 3.8 billion years ago. It was also the landing site for the Mars Curiosity rover in August 2012.

Freezing weather conditions have also been the subject of the MRO lenses, which photographed shallow gullies and asteroid impact craters covered with carbon dioxide frost.

“This mission has helped us appreciate how much Mars – a planet that has changed greatly over time – continues to change today,” NASA MRO scientist Rich Zurek said in a statement.

On March 10, 2006, the large satellite completed a seven-month journey to the Red Planet, and it is currently being used to pinpoint potential landing spots for the first human explorers.

The US space agency recently released a new – delayed – launch date for a mission to dig beneath the surface of the planet.

The Insight Mars Lander had been due to begin its flight this year. However, a leak around three main sensors meant it was unlikely to withstand the extremely cold conditions of the planet.

“The quest to understand the interior of Mars has been a longstanding goal of planetary scientists for decades. We’re excited to be back on the path for a launch,” a NASA statement read.

The hold-up is in contrast to the joint EU and Russian ExoMars project, which aims to search for alien life and drill deeper into the planet’s surface than ever before.

The European Space Agency mission is due to launch Monday and will see the Schiaparelli probe examine the lower layers of Mars’ rocky surface, while an orbiter sweeps the atmosphere for “gases of biological importance”.