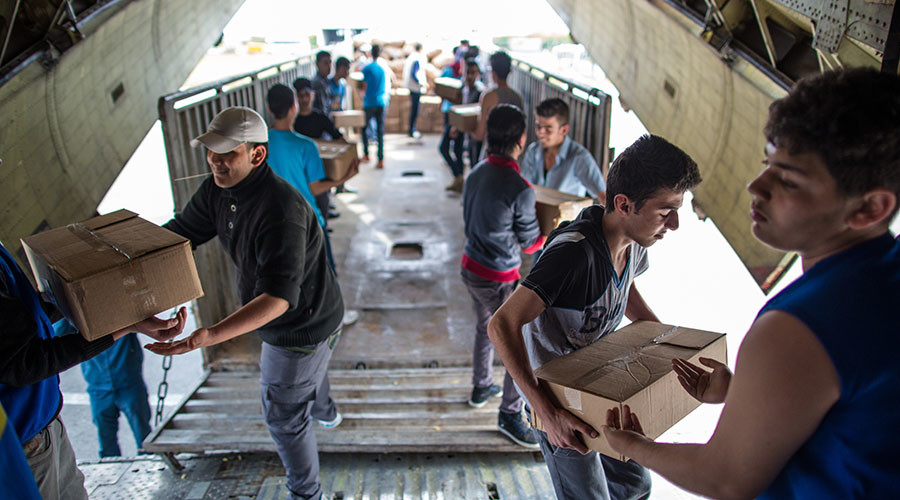 [ Editor’s Note: I met Declan Hayes on my trip to the Syrian elections in June of 2014. Ten of us from the US and three from Canada contributed to the 35 total election monitors that were brought in at the last minute, the decision made two weeks before the big day.

It seems that Damascus felt having outside monitors to babysit their election belittled them, but the Iranians finally convinced them that the only coverage they would get from world corporate media was that “Assad rigged another election”, and they could help choose monitors that would give them a fair shake.

Needless to say the monitors were quite a mixed bunch, added to our colorful trip as the city was still being shelled on the outskirts while we were there. When we left the Dama Rose hotel we had heavy security even for in-town trips, and on election day when we were spread out to the different city polling stations we had two van loads of soldiers front and back.

My group of four went up top Homs and we got to learn how much Declan loved to talk. He was an old school Irish rebel who had already made several trips to Syria, organizing aid work for both the Christian and Muslim communities.

I called him the Irish Energizer Bunny as he seemed to never stop. His briefings about his previous trips made the several hour ride go quickly.

Below is a typical list he sends out from time to time as to all the projects he is working on, and mind you he has a full time teaching position at home. He is one hell of an organizer, and has networked an experienced team to keep all the projects moving forward.

Needless to say he is loved everywhere he goes there and has a huge network of facilitators which puts him in a unique position to help show the Syrians that there are many in the West who do not support what their governments have helped inflict on the Syrian people, and with no mercy… Jim W. Dean]

This is what the hard core activists do – the heavy lifting, not just talk

Russian Air Force to Ireland: Once the Irish political situation settles down and we get the Syrian leaders to Ireland, we now have the Russian air force aboard to move humanitarian aid from Ireland to Syria, thus allowing us to substantially move the Syrian and related peace processes forward and squashing quite a few parasitical cuckoos in the process. This will hopefully give a template other countries such as Scotland, Sweden, Iran, Italy and Australia can follow.

Orthodox in Syria in May: We are hoping for a significant Orthodox contingent in Syria in May for the Palestinian Nakba (68 years on May 15th 2016) and Sykes Picot (100 years on May 16). As they will hopefully further help us awaken the Rip van Winkles of the Western Churches or to allow us move on without them, it is a win-win situation.

Syria in May: We now have an almost complete itinerary and complement for Syria in May. Our results focused itinerary is to materially help Syrian and Palestinian educational institutions, orphanages and communities and to lay the basis to repeat on larger scales in the future. Because we have a good, experienced, mobile team, who can help the peace process along at this juncture, this further venture will be another small but important success along Syria’s long road to peace.

Russian Peace Negotiators: Although Russian peace negotiators are fanning out over Syria, getting local groups to lay down their arms and clearing the scrub for the final showdown, the Syrian people will need considerable help to recover from the unjust war of aggression that has been waged on them. Unless we in the West row in, the mass murders and the suffering will continue.

Russia Marches on Palmyra: Russian peace keeping forces, in conjunction with their Syrian allies, are now moving on Palmyra which, like Nimrud and Malou’la, the West professes to hold in reverence. They should liberate it prior to our arrival so we may get there to witness more of the rebels’ human and cultural destruction.

Iran in Ma’loula, a largely Christian town that speaks Aramaic, the language Jesus spoke. We hope to get Iranian artisans to help restore the adobe work there and thereby give the locals some employment.

Free Ebooks I have uploaded a seventh ebook at the above link, from where the other six free ebooks may also be accessed. There is one more to go in the series. Best wine till last etc.

Fund Raising: The front and back pages of all the books specifically ask for donations and explain that all royalties and donations will go to helping Syrians when we return to Syria for May 15/16. Nothing is deducted for expenses. There are, as you can see, very much bigger fish to fry here.

Expenses: All expenses for all these ventures are personally absorbed. This is very important in the wider picture. All donations will be fully audited and used in Syria to aid Syrian women and children.