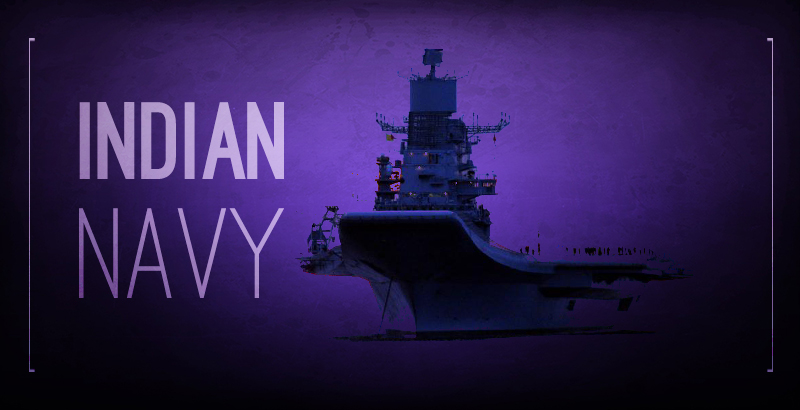 Its modern lineage dates back to the Honorable East Indian Company founded in 1612 to protect British merchant shipping in that region. Following that, it took up various names such as Her Majesty’s Indian Navy in 1830, then the Royal Indian Navy in 1934 which lasted until India became independent in 1947, and finally in 1950 it was renamed simply as the Indian Navy.

The IN’s primary objective is to secure India’s maritime borders, and also to foster international relations through joint exercises, port visits and humanitarian missions that include disaster relief. The IN also sends naval officers and specialists (including retired naval personnel) to train/instruct and exchange knowledge with various navies in world.

The IN often conducts naval exercises with other friendly countries to strengthen cooperative security relationships and to increase naval interoperability with friendly navies. The IN conducts annual exercises with the Russian Navy, French Navy, US Navy, Republic of Singapore Navy, South African Navy and Brazilian Navy. In 2003 the IN conducted an exercise with the People’s Liberation Army Navy (PLAN), in 2007 with the Japanese Maritime Self-Defense Force (JMSDF), and by the year 2008 had signed a joint naval patrol in the Asia-Pacific region waters with Japan.

The IN has been involved in various conflicts and incidents such as the 1961 Invasion of Goa which liberated the Portuguese colonized Goa region, Sino-Indian war in 1962 which was fought over the Himalayas, the Indo-Pakistani Wars of 1965 and 1971 with the latter conflict witnessing a decisive Indian victory over the Pakistani forces. The IN participated in Operation Lal Dora in 1986 to support the Mauritian government against a possible coup, and also that same year an anti-coup attempt in Seychelles, as well as the 1999 Kargil War. The India-Pakistan conflict of 2001 to 2002 which saw both nations withdrawing their militaries from Kashmir after a short military exchange, enforced through a UN resolution reinforcing the Line of Control (LOC). In 2001 the IN relieved US Navy resources by taking over operations to ensure security in the Strait of Malacca during Operation Enduring Freedom, and in 2004 the IN providing massive disaster relief operations in the aftermath of the Indian Ocean earthquake and tsunami incident to Indian states affected as well as to other nations such as Sri Lanka, Indonesia and Maldives. In 2006 the IN helped to evacuate over 2000 Indian citizens and expatriates that included Sri Lankan and Nepali citizens from Lebanon during the Israel-Lebanon conflict, and in 2007 the IN launched an operation to evacuate Indian citizens from war-torn Libya. Then in 2008 the IN sent naval doctors to serve on the USNS Mercy that conducted medical operations in The Philippines, East Timor, Indonesia, and Bangladesh for a 102 day operation. The IN took part in anti-piracy operations off the coast of Somalia in 2008 and 2011, prevented numerous piracy attempts and escorting hundreds of ships through the dangerous waters off the Horn of Africa. Later in 2015 during the Yemeni Crisis the IN rescued and evacuated over 3000 people including citizens of various other nations.

As of 2015, the Indian Navy has approximately 58,350 active personnel along with 55,000 reserve personnel, with 219 ships and 213 aircraft. The IN has a unique mixture of both Russian and American and other Western-made vessels.

Up to 26 aircraft that includes:

Godavari class Frigates: (Scheduled to be decommissioned in the near future)

80 in service with the IN

23 in service with the IN

The Indian Navy definitely has a great deal of experience in naval operations since 1961 and currently is at a ‘Semi-Blue Water’ navy status, compared to the nearest significant naval power like the PLAN (which is currently also at a ‘Semi-Blue Water’ navy status, with many military analysts believing it will attain full ‘Blue Water’ capability in the near future. Currently, the IN would perform at a significant disadvantage to the PLAN, as the PLAN has twice the number of modern vessels of a higher technological standard. The PLAN has enjoyed a much larger budget than the IN for many years as well; however, as of 2015 the Indian Navy was allotted an additional $61 billion, adding 100 more warships, including 2 more aircraft carriers with 3 nuclear powered submarines capable of nuclear ballistic missile strike capability.

In theory, when pitting the IN’s current fleet against other regional navies with less capable vessels, smaller naval defense budgets and less active personnel, the Indian Navy would exhibit a considerable advantage. The Indian Navy is capable of securing its borders from external forces and it is also likely that in an event of a confrontation from an adversary apart from Pakistan, it is likely that it would gain the support of Russian, US, or Japanese naval support due to vested interests from these parties.

India’s long term Maritime Capabilities Perspective Plan of 2007 identified two major goals for its navy – one, to develop “blue water” capabilities and two, to effectively counter threats close to its shores. In recent years the IN has been focusing on developing indigenous platforms, systems, weapons systems and sensors as part of the nation’s modernization and maritime forces expansion, transforming from being a buyer’s navy to a builder’s navy and this is rightly seen as India’s drive to turn the navy into a real blue water navy, The IN has increased its presence in the Persian Gulf, the Horn of Africa and the Malacca Straits. Working with other major military powers. The IN also conducts partnership exercises and anti-piracy missions in these areas. In the islands of Andaman and Nicobar, India has established a Far East Command to enhance surveillance around the region. The IN also conducts partnership exercises and anti-piracy missions in these areas. As of 2014, the IN has 41 vessels of various types under construction that include an aircraft carrier along with one planned joint construction with the US of a nuclear powered supercarrier(INS Vikramaditya to be operational through 2018), destroyers, nuclear powered and conventionally powered submarines, frigates and corvettes.

India’s blue water ambitions have not gone unnoticed by other countries. India has held joint naval exercises with countries like Vietnam and Indonesia – countries that view Chinese claims in the region as a threat to their security and economy – and expect India to take on a greater role in the region. In October 2015 India took part in a trilateral joint naval exercise MALABAR with Japan and the United States in the Bay of Bengal which expressed a desire on India’s part, to strengthen military relations between the countries. On September 2015 The Indian Navy held a bilateral naval exercise AUSINDEX with Australia for the first time, held off India’s Visakhapatnam Port in the Bay of Bengal. In addition both the Indian Navy and the Russian Federation Navy would annually(most recently in December 2015) conduct Exercise INDRA which involved live firing drills, as well as air defence and anti-submarine operations, counterpiracy, terrorism and drug smuggling operations.

With both India and China building up own blue water capability, the IN aims to counter China’s influence in the Indian Ocean highlighted, by Beijing’s “String of Pearls strategy – to build maritime facilities in countries like Pakistan, Sri Lanka, Bangladesh and Myanmar. This has prompted the IN to invest in more anti-submarine capability with an additional $61 billion budgeted for this purpose. The IN has also begun developing three to six indigenous Arihant class nuclear ballistic missile submarines (SSBN). Six indigenous nuclear attack submarines (SSN) are also planned, and India has been negotiating with Russia to lease a second Akula class attack submarine.

The Indian Naval Air Arm has plans to equip 40 or 50 naval versions of their indigenous multi-role fighter design HAJ Tejas to operate from the two IN Aircraft Carriers. In addition, 15 Naval variant and indigenously manufactured NAL Saras are to replace the Dornier Do-228. 17 Hawk trainers and HAL HJT-36 trainer aircraft are slated to replace the older HAL Kiran and new medium range maritime reconnaissance aircraft with four possible contenders being the ATR-72MP / ATR-42MP , EADS C-295MPA / C-235MPA , Dassault Falcon 900MPA, and Embraer P-99A. The ShinMaywa US-2 amphibious aircraft is in consideration to conduct long-rang search and rescue operations. Sixteen S-70B Seahawk Naval Multi-role helicopters (with the option of 8 additional aircraft) are set to replace the Westland Sea Kings currently in service. The addition of new IAI-HAL NRAV (Naval Rotary Unmanned Aerial Vehicle) co-developed by Israeli Aerospace Industries and the Indian Navy is also in the works.

According to an article from India Today, since 1990, the Indian Navy has lost one warship in peacetime every 5 years and since 2004 one naval combatant every two years. While peacetime losses of warships are not uncommon with other blue water capable Navies such as the Russian Navy and the US Navy as examples, according to the Times of India while some accidents reported since August 2013 were serious, many of the trivial incidents were exaggerated in the public. From the year 2000 to the present there have been 21 accidents that have occurred, most of these accidents having been attributed to aging ships that require greater levels of maintenance (most having been delayed beyond acceptable intervals), delayed acquisitions by the Ministry of Defense and those attributed to human error. However, naval commentators argue some incidents are inevitable as the IN’s 160 ships clock an estimated 12,000 ship-days at sea annually in various weather and waters. Captains of erring ships are dismissed following a naval inquiry. In 2014 the IN is envisaging a new Safety Organization to improve the safety of IN warships, submarines and aircraft of an expanding fleet strength over in the next decade.

The Indian Navy has to be one of the most internationally involved navies in the world, providing numerous humanitarian, disaster relief and anti-piracy operations support, while portraying India in a good diplomatic light in many respects and garnering respect from many nations. India also has a unique position politically, being non-aligned to any western or eastern agenda, but rather pursuing a “pro-India” agenda which places its own national self-interest at the highest priority and being quite able to cooperate with both Russia and the United States. It is likely that the Indian Navy will reach its “Blue Water” capability in the next 10 years. However it remains to be seen how India’s blue water ambitions will tilt the balance of power in the Indian Ocean and beyond.