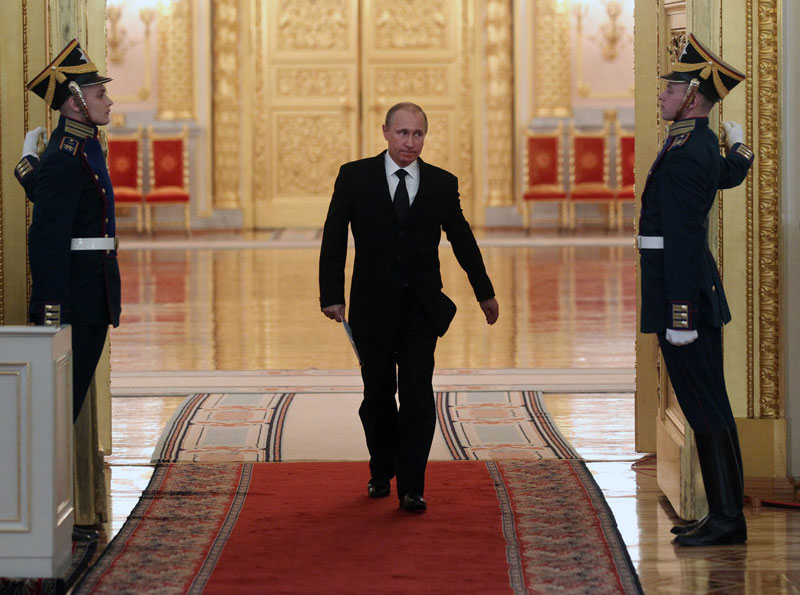 “War against a foreign country only happens when the moneyed classes think they are going to profit from it.” – George Orwell

[ Note: We have the numbers now on some of what the Russians are leaving in Syria. From head of the Parliamentary defense committee, we have Viktor Ozerov saying he estimates about 1000 military personnel will be remaining at their two bases, reported by Interfax news agency. Note this does not include non-military contractors, who are widely used in support roles.

This would include two battalions, about 800 men as base defense. Combat missions against ISIL and al-Nusra will continue, as happened at Palmyra yesterday. Not included would be the military specialists working with the Syrian Army and its allies.

And, these would include equipment maintenance people working with the new weapon systems getting their extensive field trial, and intelligence people …JD ]

The second round of the Geneva Syria talks will go down in history as having been pushed out of the news with Putin’s Monday surprise. He ordered the withdrawal of Russia’s main forces, which had been sent into Syria to counter the Western and Gulf State backed terror campaign.

And here we are five months later with 9000 sorties; over 10,000 sq kms, with 400 towns and communities liberated, and a successful ceasefire that nobody but the Russians saw as possible.

John McCain reminded us today that Obama had once defended his “inaction” on opposing Russia’s involvement in Syria by arguing that Russia would “find itself in a quagmire”. But he then continued his usual Russia bashing… that the war would drag on, ISIL would get stronger, and the refugees would keep coming.

“Dear Senator McCain, the refugees certainly won’t be coming here, as you Republicans won’t let any in. And for your claims of ISIL getting stronger, we have posted your photo with your al-Qaeda, soon-to-be-ISIL friends on Veterans Today about twenty times. You did more than anyone in Congress to support the terror war on Syria.”

Frankly, we at Veterans Today were also caught completely by surprise at the announcement. We had expected the Russian campaign to continue until at least until the Syrian coalition had pushed al-Nusra and ISIL out of the country and leaving the Syrian Army to handle the borders from that point on.

Yes, there is a lot of training and modernizing of the Syrian Army with Russia’s help, and it is stronger than ever now. But a loss of momentum could drag the war out much longer and pose a threat to any future peace process by leaving more jihadi suicide bombers behind to create continued mayhem on the poor Syrians trying to have an election.

The official Russian statements make clear that Putin felt the main objectives had been achieved; and now was the time to bow out on the eve of the second Geneva talks, putting his actions where his mouth was in terms of the claim that “Syrians must decide their future”; and to eliminate any diversionary charges that the Russian combat forces were remaining in Syria to influence events.

That said, the Russians won’t be disappearing any time soon. It seems that the major air contingent is primarily being targeted for reduction. The two Russian bases will remain, with all of their protective forces, including the upgraded air defense missiles. And the ceasefire command center will of course remain in operation.

We heard today that the Syrians on the street are worried about this initial news, that the pendulum might swing back the other way, with the terror supporters pouring in more reinforcements as the Russians pull out. But Assad’s office said that the Russians are still committed to helping Syria “confront terrorism”, the term used. The air contingents that are leaving could be gone in a week, and everyone should remember they can come back in a week, also.

I think we can safely assume that all the advisers and technical support teams assisting the Syrian Army will also be staying, along with the weapons shipments brought in to fuel the anti-terror campaign, the real one that really worked. I say that in response to the cheap comment from the White House today on the withdrawal news, “We will have to see exactly what Russia’s intentions are,” said spokesman Josh Earnest.

This was an outrageous remark from the White House that has run a phony anti-terror bombing campaign, with pilots telling us more than a year ago about the long columns of ISIL oil tankers going to Turkey that they were not allowed to strike, over “fear of killing civilians.”

That duck and dodge took a lot of gall, as the US and its Gulf State buddies and Turkey are responsible for much of the terror war on Syria. They created the huge refugee situation by using collective punishment on the people like the Israelis have done in Gaza and the West Bank with the Palestinians. Russia has the credit for having stopped that in its tracks where we all had a front row seat.

We still see some risks here for Turkey to be emboldened to take a harder stance. After all, just this week Lavrov brought up the Turkish forces inside Syria and how the YPG Syrian Kurds have to take part in the peace talks, as they are 15% of the population and actively fighting ISIL.

On Monday, Russia released how Turkey was shifting ISIL people from Turkey to Syria to fight against the YPG Kurds. It is lingering conflicts like this that we feel are still a big risk to having successful elections.

There were some interesting comments on the news today, especially from some of the opposition. Qadri Jamil of the Syrian Popular Front of Change said that, “This decision will open the doors for a political conflict resolution…the decision proves that Russia has fulfilled its promise from the beginning that the campaign in Syria will be a temporary action.”

To my surprise, the Salim al-Muslat, with the Saudi-backed High Negotiation Committee said, “If there is seriousness in implementing the withdrawal, it will give the talks a positive push”.

What I sense is the big push in letting the real opposition know they are not going to be targeted, that the door is wide open for them to join in a political settlement. With no moderate opposition to fight, Russia does not need all the air power it has used.

There is also a big push now by the Russian ceasefire coordinators to enlist the Syrian opposition in fighting the jihadis. This would increase their political reach beyond their own tribes and areas, a big step towards reconciliation on their part.

A bunch of smaller groups were counseled to form a bigger political coalition to speak for their interests without cumbersome numbers of small groups.

Russian UN Ambassador Alexey Borovavkin reported such a group was formed this week at the Hmeimum Air Base, even calling themselves the Hmeimim Group, consisting of doctors, lawyers, engineers, journalists and public activists from a number of opposition groups. Borovavkin has asked de Mistura to negotiate their being invited to the talks.

My prediction is that the Russians are betting the farm to solidify getting the peace talks going so the real Syrian local opposition will fight to defend them as allies against the outside supported groups who would have tried to wreck the talks if they did not get promises for what they wanted. If they then walked out, there would be enough of the opposition left to carry on credible talks, especially if the Kurds were brought in.

Gordon Duff and I would have liked to have first seen Palmyra and Raqqa retaken, along with the NE Idlib regions, which is the al-Nusra and Turkish command post area, before a winding down of Russian combat power. Those areas cannot partake in the talks while they are occupied. But we cannot second guess the Russian command after all they have done.