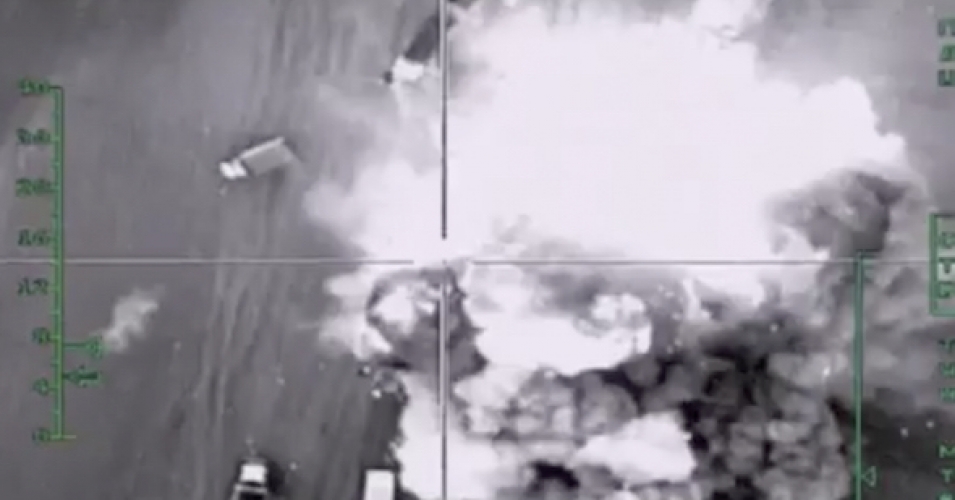 [Editor’s Note: FARS is the only source on this today, but it mentions both Russian and Syrian planes involved, which seems to have been a display of their conducting joint operations on the day Russia was flying some planes out.

I have been wondering why we had not seen more of these column attacks while they were easier targets on the road versus letting them been deployed, dispersed and dug in. We shall have to see if there is confirmation on this in the next day, or maybe something they prefer to be a quieter message sent to Erdogan not to do this during the ceasefire.

This would be the closest thing to firing on the Turkish troops inside the Syrian border, or the artillery battalions shelling from over the border. Lavrov’s major press statement today was on getting supplies from Turkey cut off, and he put that straight on Kerry’s plate… Jim W. Dean ]

The Russian Air Force tracked and targeted a long column of terrorists crossing Turkish border to join their comrades in Northern and Northwestern battlefields in Syria.

The terrorists, that were mainly Turkmen, were caught by the Russian Air Force’s reconnaissance planes attempting to enter the Lattakia province from one of the Turkish border-crossings near Yayladagi.

Upon the entry of Jeish al-Turkmen and al-Nusra Front into Syria, the Russian air fleet struck their convoy of vehicles in the Furniluk Forests, ending in the rebel fighters scattering around the border in order to evade the powerful aerial assault.

When the Russian warplanes backed off, the Syrian Air Force launched their own airstrikes over the Furniluk Forests, keeping up the pressure on the trapped rebel fighters.

Meantime, the Syrian Army, the Syrian Resistance, the National Defense Forces (NDF) and the Syrian Social Nationalist Party (SSNP) carried out a ground assault on the final villages located before the Turkish border-crossing into the city of Yayladagi.

Currently, the Syrian Armed Forces are only 7.5 km away from the Turkish border-crossing at Yayladagi; however, 3 km of that distance is empty forests.

On Monday, the Syrian army advanced in the Northeastern part of Lattakia province and encircled a large number of terrorists in the key town of Kabani, leaving them with only one way out.

The Syrian soldiers and allies imposed full control over Hill 1154 at the Southwestern perimeter of Kabani after a violent battle with al-Nusra Front, Harakat Ahrar Al-Sham and the Free Syrian Army’s “1st Coastal Brigade” and “Al-Ghaab Hawks Brigade”.

As a result of their success at Hill 1154 inside Jabal al-Akrad (Kurds Mountain), the Syrian Armed Forces were able to advance on Kabani from three different direction, leaving the extremists with only one outlet to retreat from this strategic town.

The military strategy used by the Syrian Armed Forces at Kabani is similar to that of their previous battles at Ghammam, Salma, Kinsibba, and Al-Rabi’ah, meaning they will surround the enemy combatants and leave only one road for the latter to use in order to retreat from the fight.