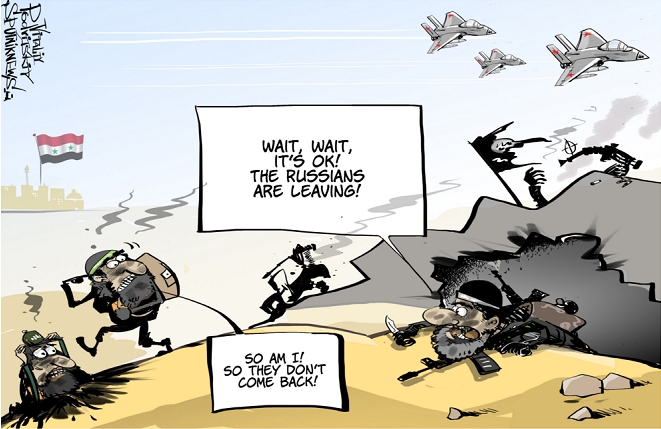 The Russian air grouping in Syria will continue to conduct air strikes against terrorists, Russian Deputy Defense Minister Nikolay Pankov said on Mar.15. The air defense systems including S-400 anti-aircraft missiles also remain at the air base and the Russian naval grouping is located near Syria’s shore.

The very same day, Russian and Syrian warplanes intensified their air raids against ISIS in nearby areas around Palmyra inflicting a heavy damage to the militants’ military equipment and positions while the Tiger Forces of the Syrian Arab Army (SAA) continued an advance in west Palmyra taking control of Jabal Hayyal. Now, the SAA and its allies are advancing in the direction of the ISIS training camp in Qatari Royal Villa.

Meanwhile, the clashes erupted between the SAA and ISIS near the Tishrin power plant in the Southern areas of the Damascus province. The SAA artillery shelled the al-Ghyath region south to the powerplant where ISIS militants gathered to launch an offensive operation in the area.

At the Deir Ezzor front, the Syrian forces have launched a counter attack against ISIS militants and captured the Turda Mountain and a part of the road heading to Deir Ezzor. Now, the Syrian troops are developing the attack in the direction of the Thayyem Oil Field.

Thus, the SAA and its allies supported by a significant number of Russian warplanes which remain in Syria are continuing active actions against terrorists excluded from the ceasefire agreements. SouthFront also received information that Putin’s decision of the partial withdrawal from Syria concided in time with a regular rotation of the aircraft involved in the Russian operation in Syria. The Russian Aerospace Forces rotate aircraft at the Hmeymim airbase regularly because of a high number of combat sorties conducted by them.

By this decision, Russia is also holding an initiative at the diplomatic field. This fact is confirmed by US Secretary of State John Kerry’s decision to visit Russia next week to discuss the Syria crisis.