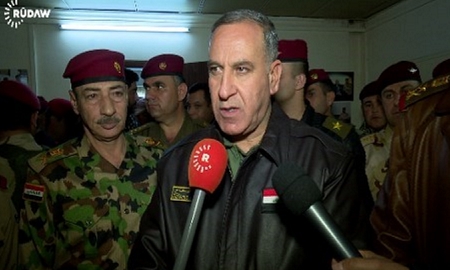 BAGHDAD, Iraq – Auditors in the Iraqi parliament say that the defense ministry has spent $150 billion on weapons in the last decade but only a fraction of that has gone to buying weapons and the rest is missing.

Iraq’s defense ministry “is one of the most corrupt ministries,” the spokesperson for the parliamentary auditing committee, Adil Nuri, told Rudaw.

“Only around $20 billion worth of arms has been bought and the other $130 billion has disappeared in corruption, such as giving bribes to officials of countries they signed the deals with, or falsifying the prices,” he said.

The auditing committee conducted an inquiry into three new arms deals of the defense ministry last month, according to Nuri. He said he found “that the ministry had signed $350 million worth of contracts with Eastern European countries but the inquiries showed that there has been a lot of corruption in the price and types of weapons.”

Nuri, who is a Kurdish member of the Iraqi parliament, said that Iraqi Prime Minister Haider Abadi was immediately notified of the issue and was urged to take action.

“We met with Abadi and informed him too officially in writing, and he stopped the deals and sent the case to the judiciary,” said Nuri.

Abadi recently announced wide-ranging reform plans starting with cutting the size of the bulging bureaucracy and reshuffling military posts in an effort to boost the country’s finances and strengthen the army, which many blamed for the fall of the city of Mosul in 2014 to the Islamic State (ISIS) group.

However, Nuri believes there might be officials in the prime minister’s own government who cover up the corruption cases, such as the latest arms deals.

Nuri said that his committee has called for the impeachment of defense minister Khalid al-Obaidi and other defense officials. But he suggested that Abadi also had been caught up in trying to cover up the case.

“Some higher officials in Abadi’s government have interfered in this case, procrastinating on the orders and decrees. So in a way, Abadi seems to be trying to cover up the corruption too,” Nuri alleged.

The parliament’s own security and defense committee has also become interested in some of the new “shady deals” and threatens to impeach the defense minister if the auditors’ claims are proven, especially in three deals.

“On those three deals we have asked the defense ministry for explanations and we are waiting for their answer,” Hoshyar Abdullah of the defense committee, told Rudaw. “If the corruptions are true we will bring the defense minister into parliament,” he warned.

The auditing committee succeeded in canceling 19 arms deals last summer, which according to Nuri were worth $1.5 billion and had been signed with former Soviet countries such as Hungary, Bulgaria, Ukraine and the Czech Republic.”

The main part of the corruption, according to the auditing committee, belongs to Iraqi defense officials have bought old weapons from the 1970s, with the price of each weapon quadrupled in invoices.

“In one of the deals they bought 50,000 Kalashnikovs, each of which is originally worth $170. But the defense officials had put down $380 for each,” Nuri claimed.

He also revealed a deal on tanks and armored vehicles had been stopped midway, after the first batch was delivered to Iraq and was found not to be of the quality mentioned in the deal.

The Iraqi military, trained and equipped by largely US forces, collapsed without a fight in June 2014, when the Islamic State (ISIS) group swept and captured about a third of the country. Billions of dollars in advanced weaponry, left behind by fleeing soldiers, were reportedly seized by the militants.