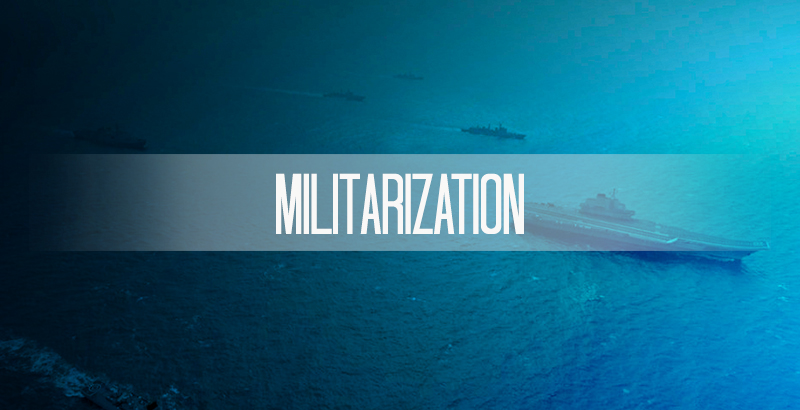 The start of 2016 has witnessed a sharp escalation in the militarization of the South China Sea. The cause of the escalation is multifaceted and comes from both regional and international quarters. The militarization has been initiated and exacerbated by both China and the United States, both bearing responsibility for the current level of tension in the region.

The USS John C. Stennis Carrier Strike Group sailed to the region from its home port in Bremerton, Washington on January 15th and passed through the Luzon strait separating Taiwan and the Philippines on March 1st. TheStennis is accompanied by the guided missile cruisers the USS Antietam and the USS Mobile Bay as well as the guided missile destroyers USS Stockdale and USS Chung-Hoon. The Antietam is based at Yokosuka Japan, and was ordered off its normal patrol to join the Carrier Strike Group. The 7th Fleet flag ship, the USS Blue Ridgeis also in the area, having docked in Manilla on March 4th. Trilateral talks were held onboard the Blue Ridge on March 5th between the U.S. Navy, Japanese Maritime Self Defense Forces and the Philippine Navy. The key subject of discussion was how the three nations can work together to confront China in the South China Sea, promote security and stability in the region, and develop future multilateral training and exercises.

The current deployment of the Stennis CSG to the region follows the previous deployment of the USS Lassenguided missile destroyer to the Spratley Islands last October, and the USS Curtis Wilbur to the Paracel Islands in late January of this year. The U.S. has also increased surveillance flights over the areas by P-8 Poseidon patrol aircraft, as well as in one case, B-52 strategic bombers.

The Navies of China and Vietnam fought a naval engagement for control of the Paracel Islands in 1974, which resulted in China’s defacto control of the islands.  China has established a military presence on Woody Island since that time, and has engaged in an extensive expansion of the base in recent years. Woody Island now has an extensive military airbase, with a number of newly built hangars and munitions storage buildings. In February, satellite surveillance revealed the deployment of two batteries of HQ-9 surface-to-air missile launchers, as well as supporting vehicles such as an engagement radar and the Type 305B AESA acquisition radar on the northern end of the island. Last November, China announced the deployment of J-11 fighters to Woody Island.

As land reclamation and building efforts on the part of the Chinese continue at Fiery Cross Reef and Mischief Reef in the Spratly Islands with no signs of slowing down in the immediate future, it will be interesting to see if the U.S. Navy increases the size and tempo of future patrols in the area. With the Royal Australian Navy taking delivery of its second Canberra class LHD HMAS Adelaide on December 4th of last year and the first of twoMakassar Class LPD vessels built by Indonesia for the Philippine Navy the BRP Tarlac launched on January 17thof this year, the U.S. Navy may soon be bolstered by more powerful regional navies in future patrols. The prime minister of Japan, Shinzo Abe announced in November of last year his willingness to have the Japanese Maritime Self Defense Forces join the U.S. Navy in patrols of the South China Sea. Australian P-3 Orion maritime patrol aircraft are currently flying freedom of navigation missions in the region.

It was reported just days ago on March 9th, that the United States and Australia were negotiating the basing of more U.S. strategic bombers, including the supersonic B-1, and aerial tankers at Australian bases on a rotational basis. The aircraft would be based at Tindal and Darwin in northern Australia. They would complement U.S. B-52 strategic bombers already based at Darwin on a similar rotation. As the brinkmanship continues, with no signs of either China or the United States backing down, the chances of a military confrontation in the South China Sea, whether calculated or accidental, continue to grow with each passing day.