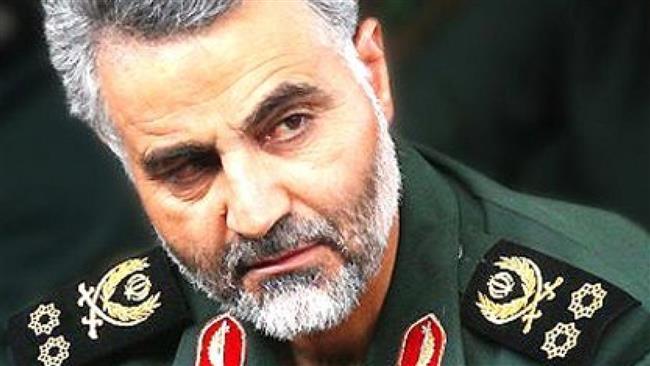 Iran’s intrepid General Soleimani lamented the fact that our Sunni brethren are plagued by a diabolic Takfiri ideology and the primitive Arab regimes dream to bring Iran to its knees by supporting terrorists but to the detriment of Sunni community, so-called [Sunni] terrorists are targeting the very heart of Sunni tenets and humanity.

Maj.-Gen. Soleimani reiterated that there is nothing to deter us from sparing our life in order to support our Muslim brothers’ dignity and welfare , saying through 37-year of Iranian revolution chronicle, and despite the illegitimate nature of Saudi despotic regime, we never looked for adventure against them but in fact its Riyadh that hatches vicious plots against Muslim nations.

Lebanon’s Hezbollah, added Gen. Soleimani, posed no threats against the Saudi Arabia, and it [Hezbollah] alone achieved glorious victories which Arab state altogether couldn’t obtain since the 1947 wars with the Israeli entity.

Iran’s Soleimani also refuted the false allegations, accusing Iran of “Shiafication” among Sunni communities, adding that Islamic Republic of Iran did and shall shield our Sunni brothers.