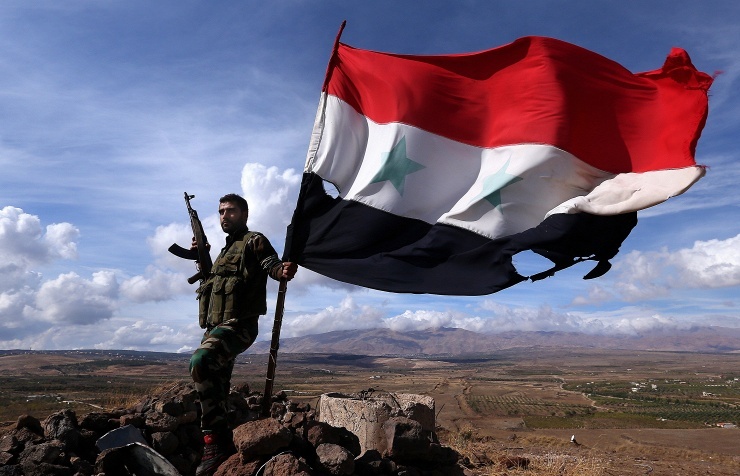 “I cannot talk with someone who puts a pistol to my head,” says leader of the Hmeimim group Ilian Masaad

[ Editor’s Note:  This new Hmeimim opposition coalition, of fifteen smaller groups, has come out of the gate swinging, and getting a three article splash in TASS today with this lead article taking on the Saudi backed HNC rump opposition group.

The new group leader mentions they have had informal talks with Assad, which means they were really formed prior to what we are being told, but behind the scenes talks are not unusual in a mess like this.

Much of our VT work there was behind the scenes, like trying to get agreement for rescuing downed US pilots via joint US-Syrian teams to prevent any being captured by ISIL. Getting to them quickly is always critical, so you need basing and close coordination with assets on the ground and only Syria had capacity.

Yesterday it was reported that Russia was going to ask de Mistura to bring this new group into the Geneva talks as there is no ball game if they aren’t there. It is hard to image that he would not. One key reason would be if the Saudi group walks out because their preconditions are not met then the show can still go on with those remaining.

The Hmeimim group mention of Assad having 50% support was a curve ball as his election margin was way above that. But their point was that the idea of Assad’s supporters being told they are disenfranchised by not having a candidate so there can be “fair” elections is just a little bit ridiculous. It is simply asking for a rigged election going in, which has become a very democratic thing is seems

This is the first opposition group to come out and say that Assad’s involvement should be determined by his desires and the strength of his support. That will have the US coalition crowd’s shorts tied in a knot. This is the kind of input that you get with a real and independent opposition group. But we will have to know more on these people to be sure they are not on someone’s string, as is so often the case… Jim W. Dean ]

Discussions with opposition members from the Riyadh group (the High Negotiations Committee – HNC) are possible if their supporters agree to lay down arms, Ilian Masaad who heads the delegation of the internal Syrian opposition in Geneva that came to be known as the Hmeimim group has told TASS.

“If they say that we stop here and that it is necessary to lay down arms,” he said when asked whether the Hmeimim group was ready for contacts with the HNC. “I cannot talk with someone who puts a pistol to my head.”

When asked whether the HNC controlled armed groups on the ground, he said,

“No, it doesn’t.” “Terrorist and other groups opposed to the state are controlled by people funded by Qataris, Turks and Saudis,” he noted. “There are people in Riyadh’s delegation who work for this project. That’s their job.”

However, “if one day Turkey says, ‘Enough!’, the next day the Turkish border will be closed and the delivery of weapons and ammunition still be stopped,” the politician said. “If the Qataris and Saudis say that there are no more funds, the number of HNC supporters will decrease within two or three months.”

According to Masaad, “members of Riyadh’s delegation present an unrealistic picture” in Geneva. However, whether they have real support among Syrians will be determined during the elections. “I would like them to stay for some time and say that they will take part in the elections,” he said.

Masaad noted that HNC representatives had never tried to get in touch with the internal moderate opposition.

“They have never tried to talk with us,” he said. “They were created exclusively for this crisis. When the United States and Russia said that this was the end, Turkey, Saudi Arabia and Qatar show through the Riyadh group that they do not want this.”

On the other hand, Masaad did not rule out contacts with the Moscow-Cairo group.

“I met with Jamil [one of the leaders of the Moscow-Cairo group – TASS] and told him, “You, Kassis [Randa Kassis, a representative of the Syrian opposition group that joined forces after a conference in Astana], Kurds, we and even the government’s National Progressive Front – all this is Syria. And all others are terrorists,” he said.