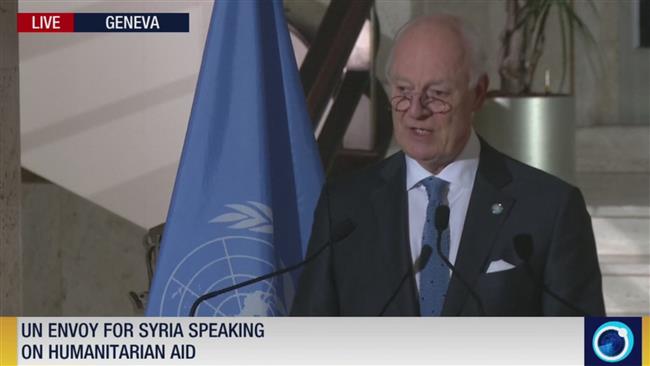 [ Editor’s Note: Finally some substantive news on the Geneva talks, the federation issue being put to bed for now, in the talks. Assad had made a statement that he would go along with any form of government that the people decided they wanted, which would have included federation. But we don’t know if the measure for that was a referendum or what.

The Syrian Kurds are not yet party to the talks, so they might claim to not be bound by this, but they only have two ways to get supplies in or out — Syria or Turkey — so they may be pushing a string on federations.

It is still hazy at this point what opposition groups are there besides the Saudi group, which has gotten most of the attention. We need to find who has not only a list but a detailed background on whom and what they are, at this point of the game… Jim W. Dean ]

The UN special envoy for Syria says both the Damascus government and the Syrian opposition oppose federalization in the war-ravaged country.

Staffan de Mistura said on Thursday after holding talks with a delegation of the Syrian opposition in the Swiss city of Geneva that the government and opposition agree on the country’s territorial integrity and oppose a “federal system.”

“We are not talking about a new agenda, the agenda is very clear, we are looking for commonalities between the two sides and find the gray zone,” he added.

The UN mediator said he held “substantive talks” earlier in the day with the opposition delegation, adding that the opposition had submitted a paper on political transition which “went very deeply into detail.”

De Mistura said his talks with the Syrian government delegation, planned for Friday, is also expected to be productive.

Asked about whether the UN has found issues on which both the government and the opposition can agree, De Mistura said it is too soon to discuss such things.

“It is very premature to tell you about the gray zone,” he said, adding that the distance between the two sides remains “very large.”

De Mistura described the situation on the ground in Syria following the entry into force of a ceasefire three days ago as “surprisingly calm.”

He said the warring sides should fulfill their obligations to allow humanitarian aid to reach those in need in Syria, saying no excuse will be acceptable for blocking the cargoes.

UN officials said earlier on Thursday that they seek to reach one million besieged Syrians in six weeks. The head of the UN task force, Jan Egeland, said a plan has been submitted to the Syrian government that would allow life-saving supplies to reach those people by the end of April.