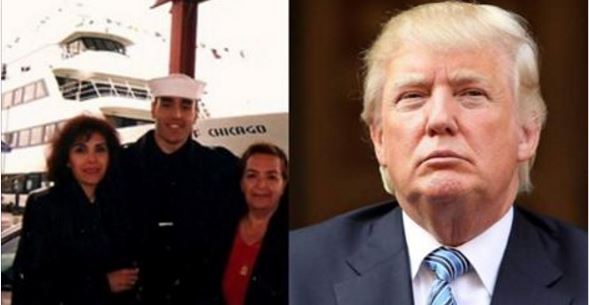 Trumpsters Call Themselves Patriots While They Abuse Real Patriot U.S. Veteran Who Served and Continues To Serve His Country and Community.  What’s Going on Here? Who Are These People at War With?

One of the most perplexing parts of the Donald Trump experience is that his fans don’t seem to believe in anything. They hold no principles they won’t instantly abandon on a whim; they never practice what they preach, and what they preach has absolutely no relation to reality.

This bizarre lack of ideological cohesion is particularly galling when it comes to our veterans – publicly, they put our fighting men and women on a pedestal to use for political brownie points, but when it comes down to it, your religion means more to them than the sacrifices you’ve made to keep them free.

That disgusting hypocrisy put on full display today when a Muslim-American Navy veteran was forcibly ejected from a Trump rally – his crime was holding up a sign saying “Stop Hate Speech Against Muslims!”

Reported by National Affairs Correspondent for The Nation and MSNBC political analyst Joan Walsh, she said they also yelled “get a job” at him.

Nate Terani is an exemplary man of unquestioned commitment to his country, far more deserving of the noble title of “American” than the racist scumbags who threw him out of the rally. He served his country for over ten years as the Special Assistant to the Master Chief Petty Officer of the Navy, a member of the Presidential Honor Guard, and worked for the Defense Intelligence Agency before hanging up his uniform in 2006.

After he served his country, he dedicated his life to the men and women he served with. He is the Veterans Coordinator at an Arizona nonprofit called Soldier’s Best Friend, which provides and trains service and therapeutic dogs to our warriors who suffer from post-traumatic stress disorder or a traumatic brain injury:

Trump supporters claim to be true patriots that are proud of their military, but apparently that respect and pride only extends to white Christian veterans. How dare these ignorant bigots treat a man who has put his life on the line for their country with such callous disrespect? They claim to love their country and want to make America great again, but they hate everything that made this country great in the first place.

They hate our democracy and seek to undermine it at every turn; they hate the diversity that founded our nation; they hate the justice system for passing rulings they don’t agree with; they hate the public institutions that educated them, that made sure their parents didn’t starve, that gives them the freedom to behave in such an appalling manner.

We applaud Mr. Terani for his courage in standing up to Trump’s hate and apologize for the disrespect he has endured at the hands of cowards.