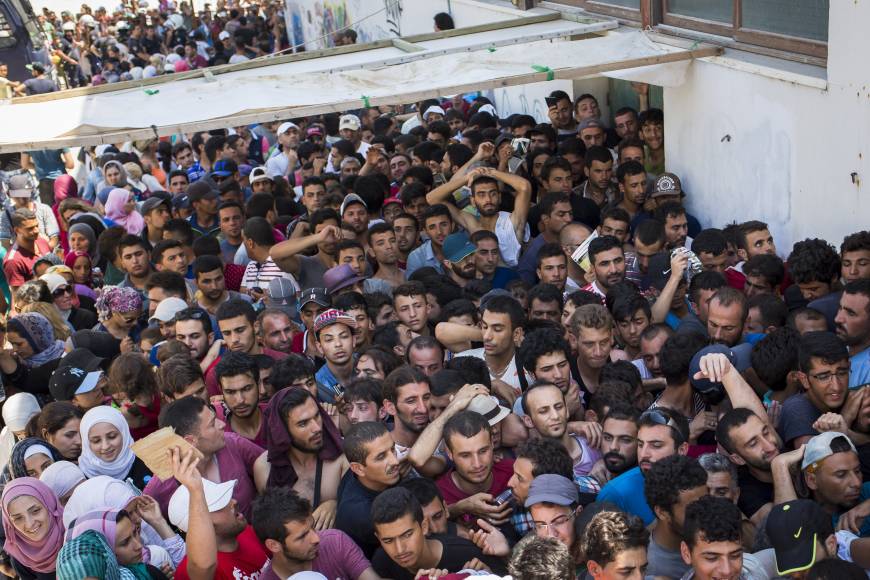 [ Editor’s Note:  My, my… how quickly the authorities can move when they want to. On the day after the Turkish-EU refugee agreement, the Turks miraculously shut down the Aegean Sea human smuggling operation at the flick of a switch, rounding up the 1700 who were getting ready to leave and taking them to reprocessing centers.

Today we have Greece saying they will have the 6000 island refugees in temporary camps cleared out in another day, with the first ferry load of 2500 on their way now. This all could have been handled this way earlier, but someone did not want that.

It all goes back to Merkel and her flamboyant attitude of throwing Germany open to a million plus refugees a year, and then dumping on the southern EU members to deal with the deluge, some of the poorest. She showed total absence of leadership, as did the EU, who supplied no added manpower for sea rescues, faster processing, or security people — everybody relying on the Tooth Fairy to take care of things.

It looked like dysfunctional government… until today, when we see once again that they do what they want to, when they want to. Refugees now will have to face changing over from fleeing the war, to fleeing the rebuilding that will be needed to see if that qualifies them for entry.

The EU benefits are like winning the lotto in Syria, if it had one. Merkel and the EU should be putting their $3 to $6 billion Euros into getting the Syrians out of Turkey. They could then start rebuilding their country via the reconstruction needed, all the jobs that would create, versus being in the lottery business of helping those with the cash to buy their way out, which is what has been happening.

I have mixed feelings about when refugee benefits are so high for leaving versus those in-country that people will risk their lives and their children’s lives to get the refugee benefits… Jim W. Dean ]

Greece, with help from the EU, has started the evacuation of 6,000 asylum seekers from temporary camps on Greek islands, following the EU-Turkey repatriation agreement struck on Friday.

On Saturday, it was announced that the majority of people were set to be evacuated within 24 hours. The ferry with the first 2,500 refugees was due to leave on Sunday.

The EU has pledged to provide 2,300 security and legal experts, as well to help the evacuation, with the first ones arriving during the weekend, the Greek newspaper Kathmerini reported.

Plus, Germany and France promised to send to Greece 300 officials and “technical expertise” to assist the process, according to German news agency DPA citing a letter from German Interior Minister Thomas de Maiziere and his French counterpart Bernard Cazeneuve to the European Commission.

“This is necessary in view of the current situation in Greece and is an important expression of European solidarity. We hope that many Member States will join our example,” the two wrote in the letter.

Despite the move, refugees are confused about what to expect after the repatriation, Deutsche Welle reported. Also, not all of the asylum seekers were to board the ferries: newcomer refugees were to stay until their registration is confirmed.

For every Syrian refugee coming back to Turkey, the EU pledges to resettle one asylum seeker from Turkey, according to the deal between the EU and Turkey, agreed on Friday. The goal of the deal is to prevent the refugees from taking the dangerous route across the Aegean Sea: some 4,000 people have died there over the last few years.

The main stage of the repatriation process is set to begin on April 4, German Chancellor Angela Merkel said.

This comes on the backdrop of Greek authorities’ statement that there are some 47,000 undocumented refugees in the country, and 21,000 of them came to Greece in March alone, according to the United Nations refugee agency (UNHCR)’s estimates.