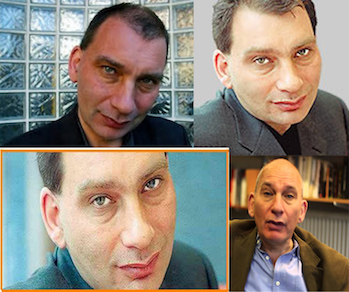 Every few years, pro Iraq war and enthusiastic Ziocon Nick Cohen, insists upon declaring that he is becoming a Jew as if he weren’t a Jew to begin with.  Back in 2009, Cohen used the Jewish Chronicle to announce: “Hatred Is Turning Me Into A Jew”. One would expect that the conversion would be compete by now but yesterday Cohen used the Guardian to repeat his lie. The Guardian headline read: “Why I’m becoming a Jew and why you should, too.”

Read a few lines and you grasp that Cohen isn’t just a Jew, he is a stereotypical Zionist Jew. He embodies every problematic symptom associated with Jewish ID politics.

Cohen tells us that it took him 40 years “to become a Jew.”   He wants us to believe that the fact that his father’s family abandoned Judaism made him into a qualified‘Goy’. In truth, most Jews abandoned Judaism a while back.  Zionism was largely a secular movement led by Jewish atheists.  Cohen adds that his mother andgrandmother weren’t Jewish either.

A prominent Guardian writer is ought to know that contemporary Jewishness is defined byidentity and identification and Nick Cohen has always identified with Jewishness and far worse, with Zion and the Zionist militancy.

In order to determine whether Cohen is a Zionist Jew or an ordinary Goy all you have to do is to read his words, “Whenever I hear Jews announce their hatred of Israel’s very existence, I suspect that underneath their loud bombast lies a quiet plea to the Islamists and neo-Nazis…”

The attempt to split the Muslim world into ‘bad Islamists’ and ‘kosher Muslims’ is a blatant Zionist binary strategy that makes it legitimate to kill innocent Muslims in the name of Coca Cola or Israel’s security.  Like Nick Cohen I also tend to distrust the anti Zionists Jews.  However, in the real world, Jews who announce their ‘hatred of Israel’ are not afraid of Neo Nazis. They, in most cases,  want to relieve themselves of any association with the colossal crimes committed by the Jewish State and the global wars advocated by Nick Cohen, David Aaronovitch and the Jewish Lobby. This is more than reasonable.

Maybe Nick Cohen doesn’t realise that Judaism is just one Jewish religion amongst many.  Since their emancipation, Jews have subscribed collectively to many religions. At various stages, Jews have believed in Bolshevism,  Zionism, Atheism,  Egotism (a la Ayn Rand), Free Market (a la Milton Friedman) , Human Rights (for everyone except the Goyim),  Moral interventionism and it is nowwidely accepted that the Holocaust has become the most popular Jewish religion. In fact for a preceptto become a ‘Jewish religion’ all it has to do is to a facilitate a sense of choseness or exceptionalism.