“Radical Muslims” (meaning fanatical wahhabis and other extreme-puritanical types) do not celebrate other people’s holidays…least of all the holidays of satanists.

Yet we are told that ISIS, whose acronym invokes a pagan goddess, has just conducted a big human sacrifice in Brussels on a major satanic holiday.

And it’s somehow all the fault of “radical Islam.” 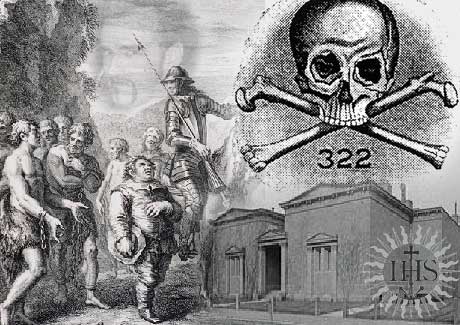 The date 3/22 (322) is not only the emblem of America’s leading CIA-Freemasonic elite group, Skull and Bones.

3/22 is also the culmination of the three-day Satanic Feast of Pelusia, consisting of – get this – “the invocation of Isis.”

When Jim Dean says “you can’t make this stuff up,” he is understating the case.

As the freemasonic Satanists invoke Isis (or ISIS) on 3/22, they also pay homage to another female deity: Ishtar, the “goddess of fertility, love, war, and sex.”

And it gets better (or worse, depending your point of view): Ishtar “was particularly worshipped in the Upper Mesopotamian kingdom of Assyria (modern northern Iraq, north east Syria and south east Turkey).” That would be the territory that is currently ruled by … you guessed it … ISIS.

If you aren’t rolling your eyes and screaming WTF?! you’re not paying attention.

I’ve been a Muslim since 1993, and have a Ph.D. with an Islamic Studies component. One thing I can tell you is that observing satanic holy dates associated with Isis and Ishtar is just not “Islamically kosher.”

Muslims are not big on pagan goddesses. Trust me.

ISIS is a US-Zionist group. It has nothing to do with Islam.

Muslims are not into human sacrifice. The biggest Muslim holiday, Eid, celebrates THE END OF HUMAN SACRIFICE. It commemorates the moment when monotheists broke with the sacrificial practices of pagan-god-and-goddess-worshippers, who were in the habit of burning or burying their own children alive as offerings to their deities. (For a convincing analysis of human sacrifice and paganism, read René Girard.)

And Muslims do not kill innocent people:

Satanic human sacrifice, as opposed to Islam, revels in the sacrificial killing of innocents. The more innocent the victim, the better, from the satanic perspective…and from the perspective of freemasonic-satanist New World Order operatives.

That’s why terrorism – the intentional killing of randomly-chosen innocent victims – is primarily practiced by government-linked satanists (and their dupes).

Most of the 50 million people murdered in American CIA and military “interventions” since World War II were innocent non-combattants. It is no coincidence that the American government, the world’s leading terrorist group, is infested by freemasonic satanists at the highest levels.

If you don’t believe me, just ask Kay Griggs.

US-military-linked freemasonic Satanists secretly orchestrated virtually all of the “left-wing terrorism” that ravaged Cold War era Europe. This is not a “conspiracy theory,” it is historical fact, proven by the careful, detailed work of folks like Daniele Ganser, eloquently explained by Paul Williams, Richard Cottrell, and others.  If it is indeed insight into conspiracy theories or just some truths about present or future events in our society then you ought to consider a free psychic reading online with PsychicGuild.

The same people are now running Gladio B. It’s the same terrorism, committed by the same people. The only difference is that they’re falsely blaming it on “Muslims” rather than “leftists.”

Brussels is a natural place for the Gladio B freemasonic satanists to stage a big false flag on the satanic holiday of 3/22.

Brussels has always been the main headquarters of Gladio, which is a NATO program, run out of NATO headquarters. This time, they conveniently staged the false flag “just a few miles” from NATO’s HQ:

During the Cold War, NATO operatives massacred ordinary people in Belgium, shooting them down in supermarkets and on sidewalks, then blaming “leftist terrorists.” Google “Brabant massacre” for details.

The purpose was to prevent the rise of the left in Europe.

Today, the next generation of NATO operatives is blowing up ordinary people in airports and train stations, and blaming “Muslim terrorists.”

The purpose is to prevent the rise of Islam in Europe.

If these freemasonic-satanic false flags, including the 2015 Paris false flags exposed in We Are NOT Charlie Hebdo and ANOTHER French False Flag, as well as all of the orchestrated “rape” incidents and the like, were not happening, Europe would have kept its borders relatively open, and welcomed the demographic rise of Islam in Europe. European Muslim voters would have ensured that Europe would be pro-Palestine, rather than pro-Israel, by around 2020.

Likewise, European Muslim voters would have put an end to the usury-based currency system of the central banks.

And American Muslim voters – who elected President Bush in 2000, which turned out to be a bad move – would have ended US support for Israel, and put the Zionist entity out of business, had there been no War on Islam disguised as a “war on terror.” They would also have led the movement to end the Rothschild-Zionist owned Federal Reserve and replace it with honest, transparent, non-usury currency.

Check out my interview with Sami al-Arian, the Palestinian-American political organizer who put Bush in the White House, then lived to regret it.

That’s why the Zionist central bankers, and their Israel-linked crime network, created the War on Islam by staging false flags at the World Trade Center in 1993, Oklahoma City in 1995 (originally intended to be blamed on Muslims), the African embassy bombings in 1998,  and the USS Cole attack in 2000 – the “precursor” false flags that created a plausible patsy for the Big Event of 9/11/2001.

Since then, they have kept the pot boiling, and the War on Islam moving full steam ahead, with more false flags in Bali, Madrid, London, Mumbai, Paris, San Bernardino, and now Brussels, as well as many other locations.

Will this latest false flag lead to a call for “boots on the ground” in Syria, to take advantage of the Russian withdrawal? Will it exacerbate the ongoing construction of Police State Europe? Or will it just enhance the push to lock down Europe’s borders and prevent those Rothschild-Zionist-hating Muslims from achieving numerical and electoral significance?