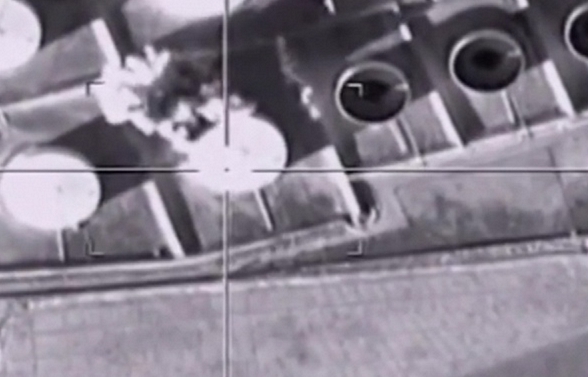 The flows have however decreased considerably Russia’s top diplomat noted that the ongoing traffic across the Turkish border was observed in both directions. “However, after our Aerospace Forces initiated the operation to terminate the illegal traffic, particularly, of oil and oil products from Syria, from the areas controlled by ISIS (former name of the Islamic State terrorist group outlawed in Russia) to Turkey, this traffic has decreased substantially,” he said.

Lavrov added that after the Russian Aerospace Forces paid special attention to this problem, “members of the U.S.-led coalition responded to it.”

“In general, although this flow has not run dry altogether, it has decreased considerably,” the minister said. “Nevertheless, it is still there. The sector of the border between two Kurdish enclaves in northern Syria is actively used.

The Russian foreign minister drew attention to the fact that when Kurds were trying to win back territory from the Islamic State group, “artillery bombardments of Kurdish positions were conducted from the Turkish side thus hampering their fight against this terrorist group.”

Resolutions musts be complied with

He noted that these resolutions were binding and envisaged constant accountability of the UN Secretary-General. “The first such report was submitted to the UN Security Council a couple of weeks ago,” the minister said. “We took note of the fact that it is non-specific and does not even mention the facts that confirm that the activities of the Islamic State, Jabhat al-Nusra and related terrorist groups are fuelled via Turkish territory.

“I hope this is some technical error rather than attempts to show political correctness to the party, which refuses to effectively embark on the fight against terrorism and, what’s more, uses the slogan of fighting against terrorism to suppress the Kurdish organizations in Syria as well as on its own territory,” he said. “We will continue to insist that (UN) resolutions are fully complied with. I am sure no one can have any excuses on this matter.”